In this month’s Schaeffler LuK Clutch Clinic, REPXPERT Alistair Mason is replacing the clutch on a 2013 MINI Countryman ALL4 Cooper S (R60), along with the dual mass flywheel. This vehicle is fitted with a 1.6 turbo PSA engine.

This car has covered just over 46,000 miles, indicating that the vehicle is used for short trips, as the customer had reported that the clutch is ‘slipping’, and a short road test confirmed the problem. The car was booked in and the parts ordered ready for the repair, with the repair instructions and service information checked on REPXPERT, printed and attached to the job.

As this model is four-wheel drive, it may put some independent garages off taking it on, but as this feature indicates, it’s a straightforward repair with minimum investment in special tools. With a book time of 6.7 hours, this makes a great repair for any independent garage.

Disconnect the gear change cables and unbolt the cable retaining bracket, followed by the earth point next to the gearbox mounting, disconnect the reverse light switch and then, remove the upper bell housing bolts. 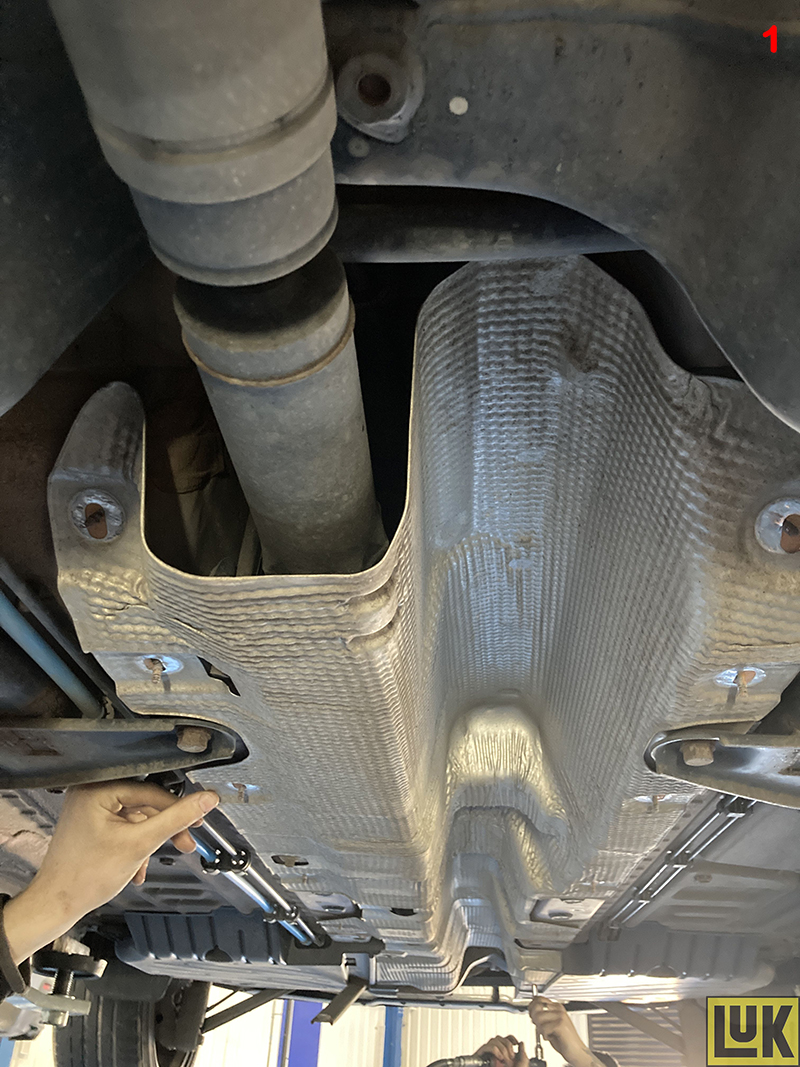 Then remove the driveshafts by taking off the front wheels, releasing both bottom ball joints, disconnecting both anti-roll bar links, unbolting the headlight level sensor from the O/S bottom arm (Fig. 2) and removing both hub nuts. Ease the driveshafts out of the hubs and then lever the inner joints out, and once free, remove from the vehicle. 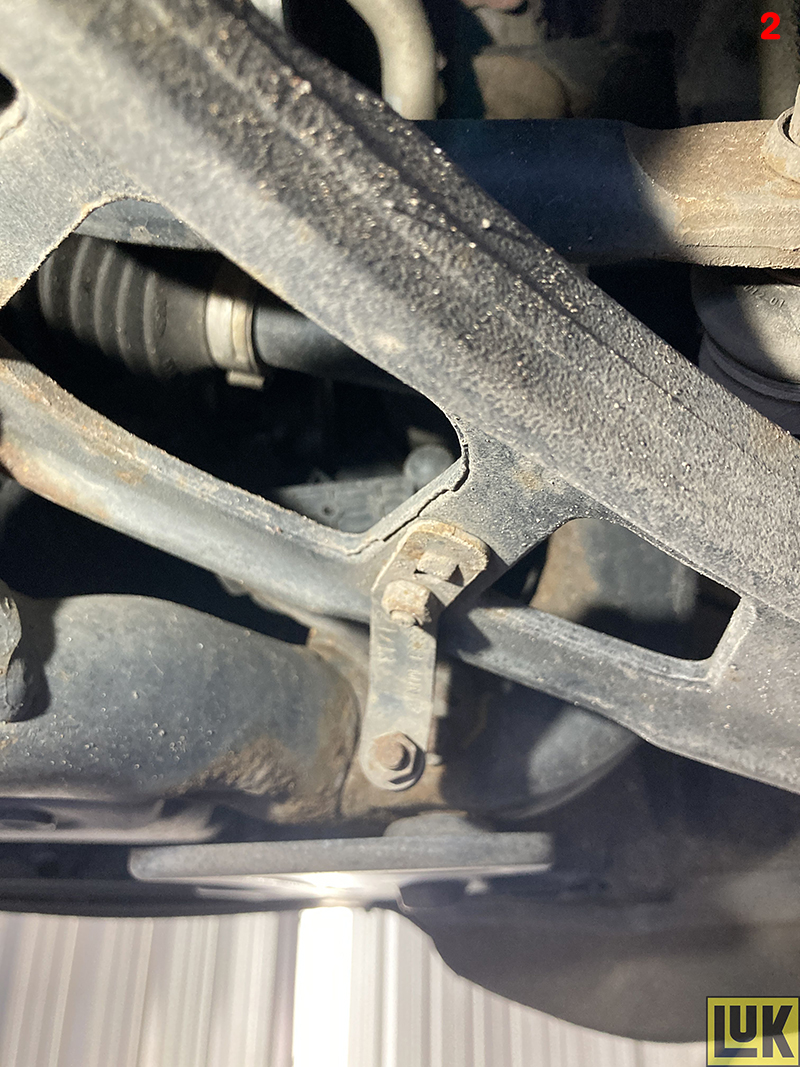 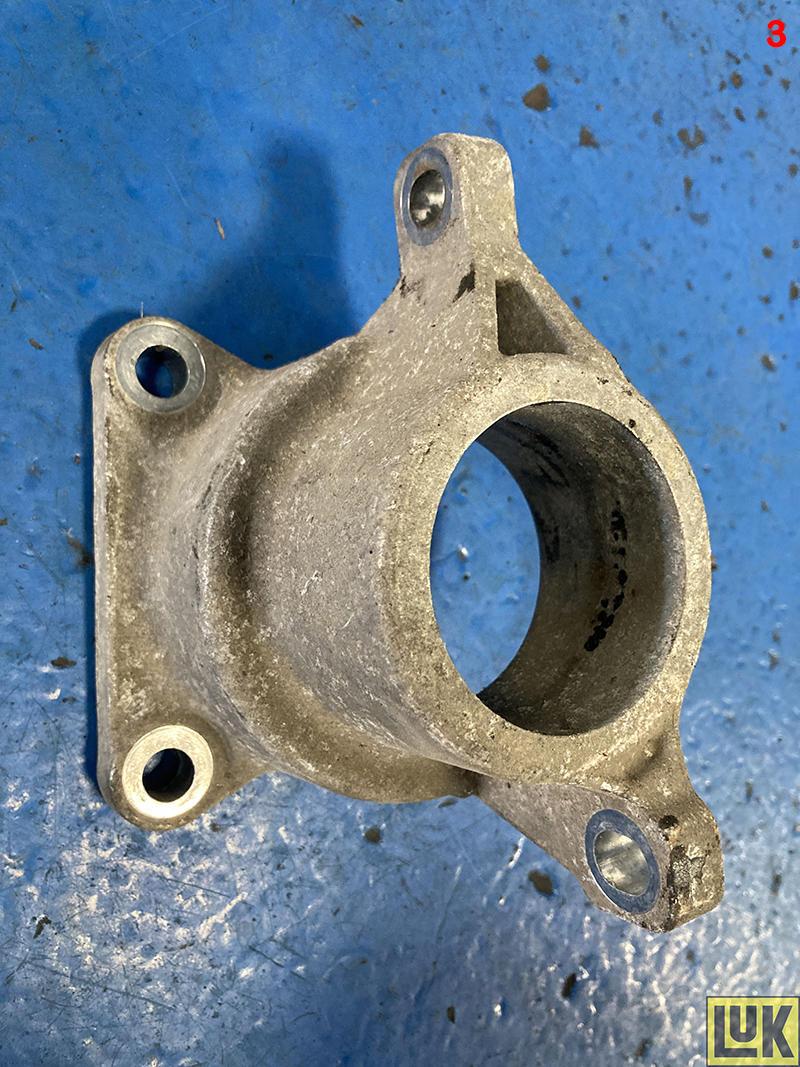 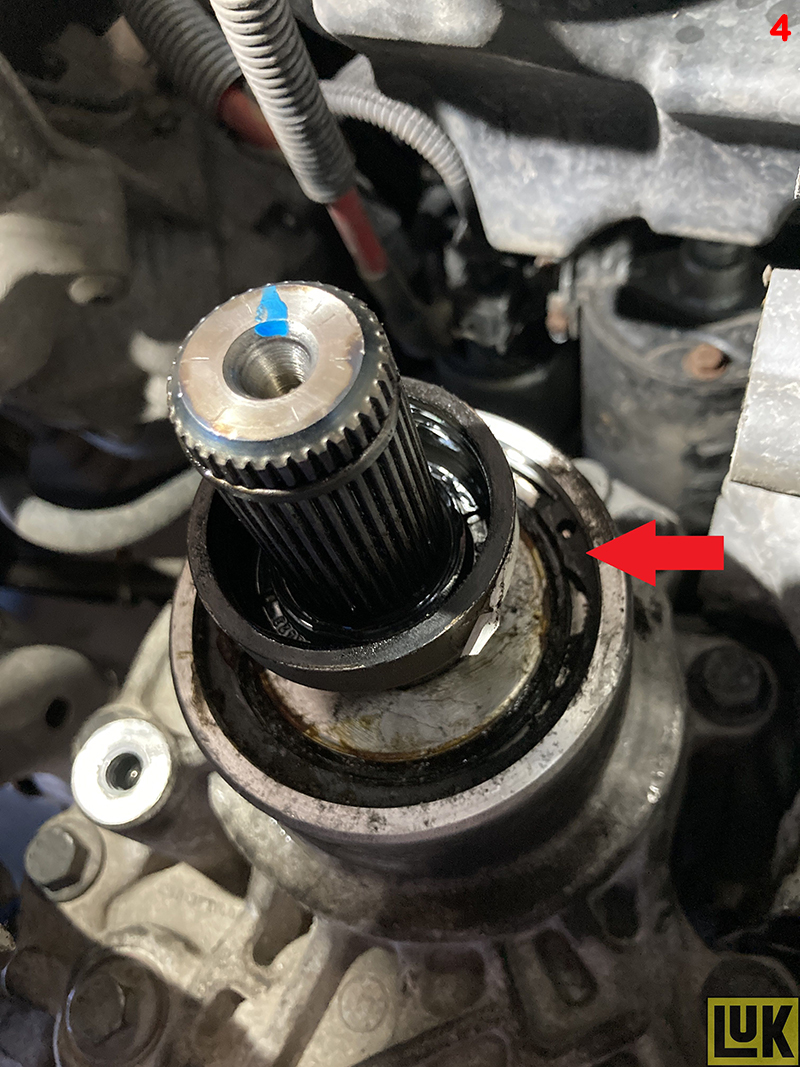 At the front of the gearbox, unbolt the clutch slave cylinder, leaving the hydraulic pipe connected, and stow away from the gearbox. 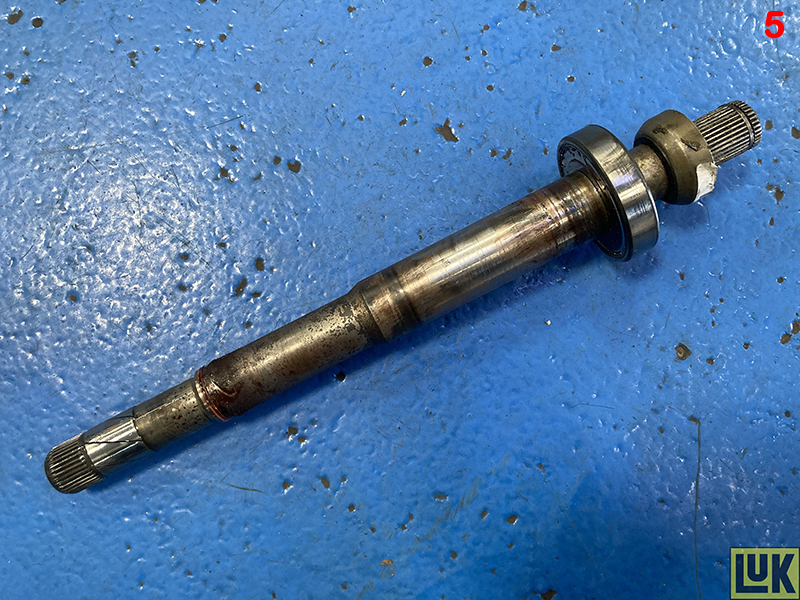 Disconnect the multiplug for the gear recognition switch located above the clutch slave cylinder and then, remove the starter motor bolts (Fig. 7) followed by the remaining bellhousing bolts, leaving one or two easily accessible bolts to support the gearbox until its removal. 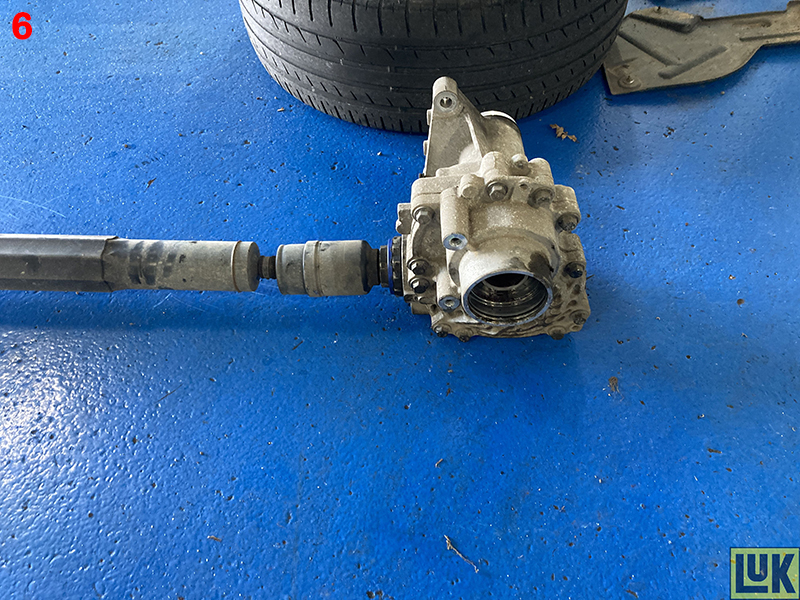 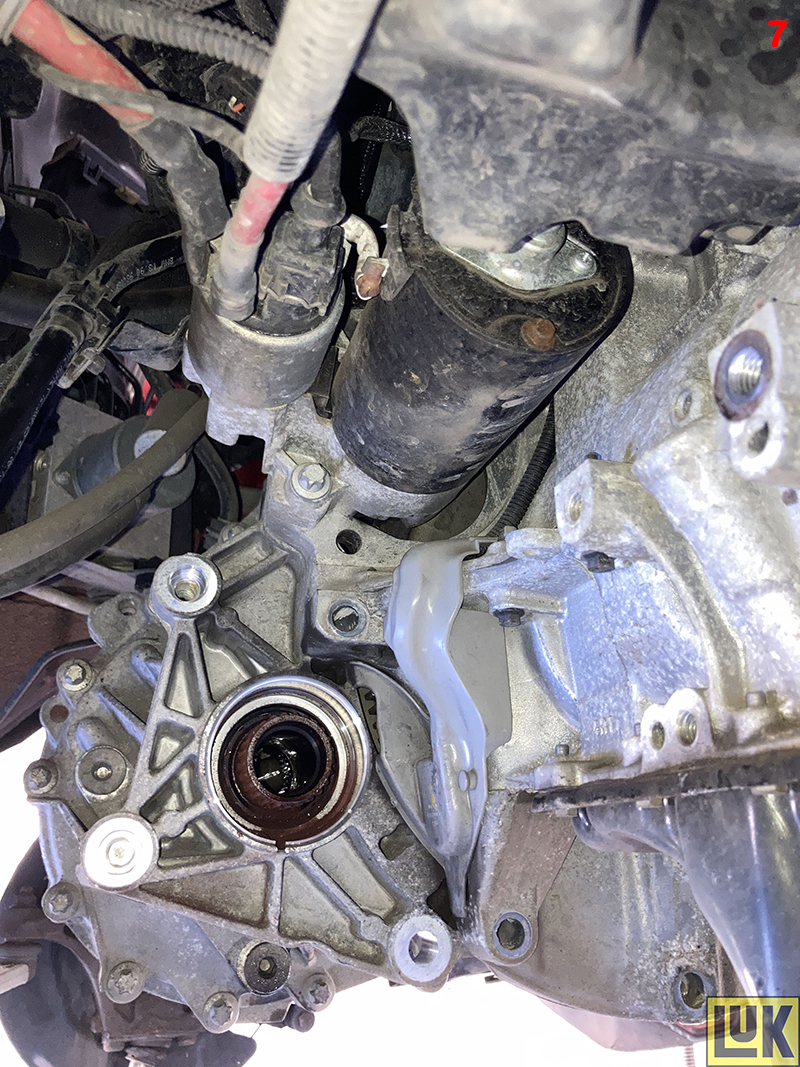 On inspection it was evident that the clutch had been slipping as the pressure plate and dual mass flywheel face was ‘blued’ (Fig. 8&9). So, the replacement of the dual mass flywheel was advised due to possible heat damage, and authorisation was given. 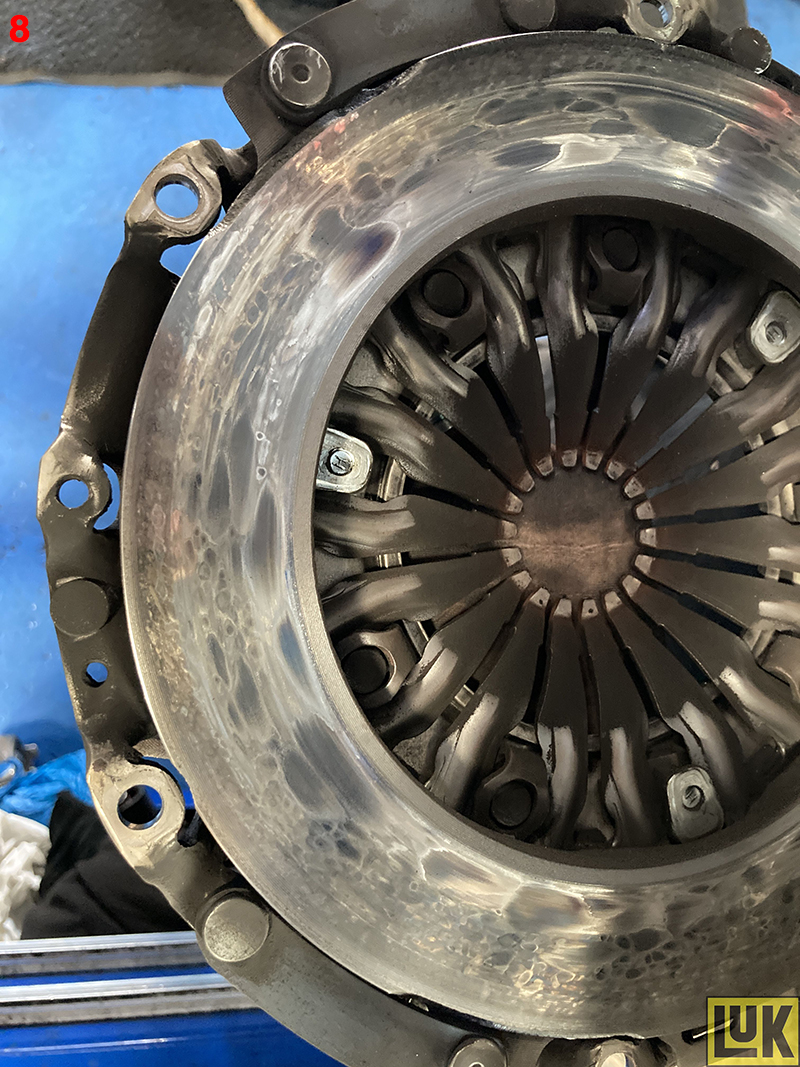 Secure the new dual mass flywheel in position with the new bolts supplied and torque to the manufacturer’s specification (torque values are easily obtained through the Schaeffler REPXPERT platform). 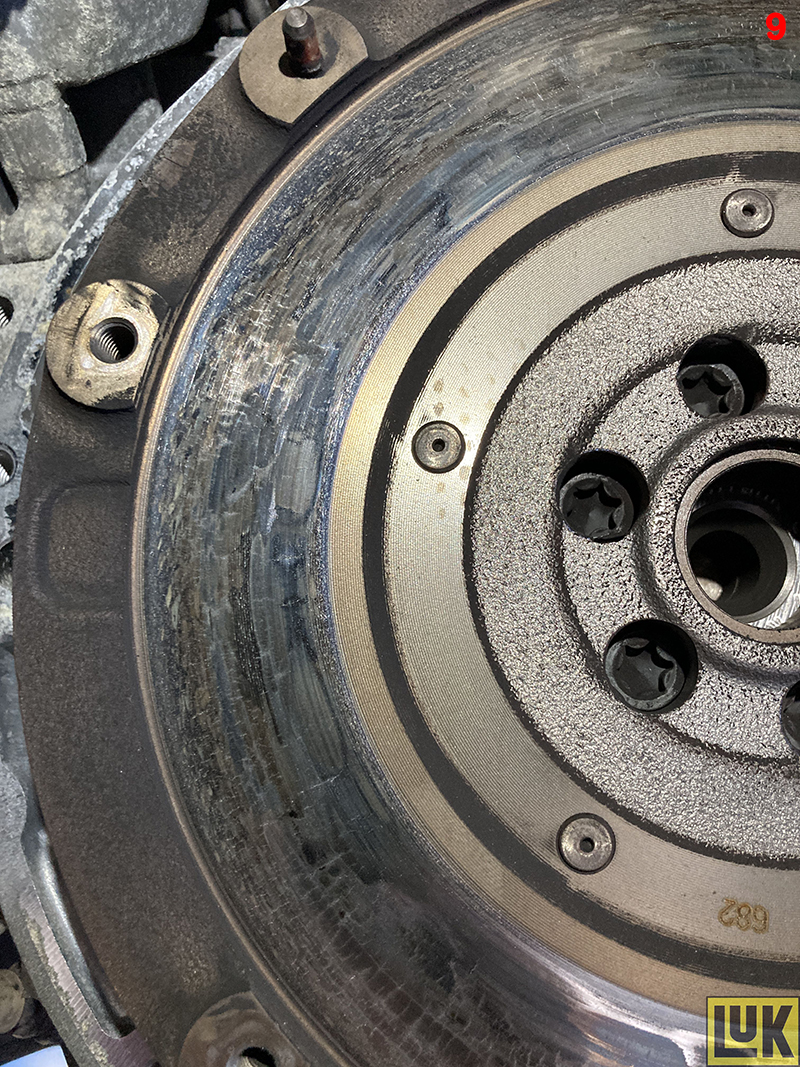 Then follow the usual proven process of cleaning the gearbox bellhousing, checking pivot points and guide tubes for wear, applying a light smear of high melting point grease to the gearbox input shaft splines, and then mounting the clutch plate to ensure correct fitment and to evenly distribute the grease, and then taking it off to remove any excess grease.

Degrease the flywheel face and the pressure plate face with clutch and brake dust cleaner and, using a clutch alignment tool, mount the clutch plate and cover (Fig. 10), install, tighten and torque the clutch bolts in an evenly and sequentially. 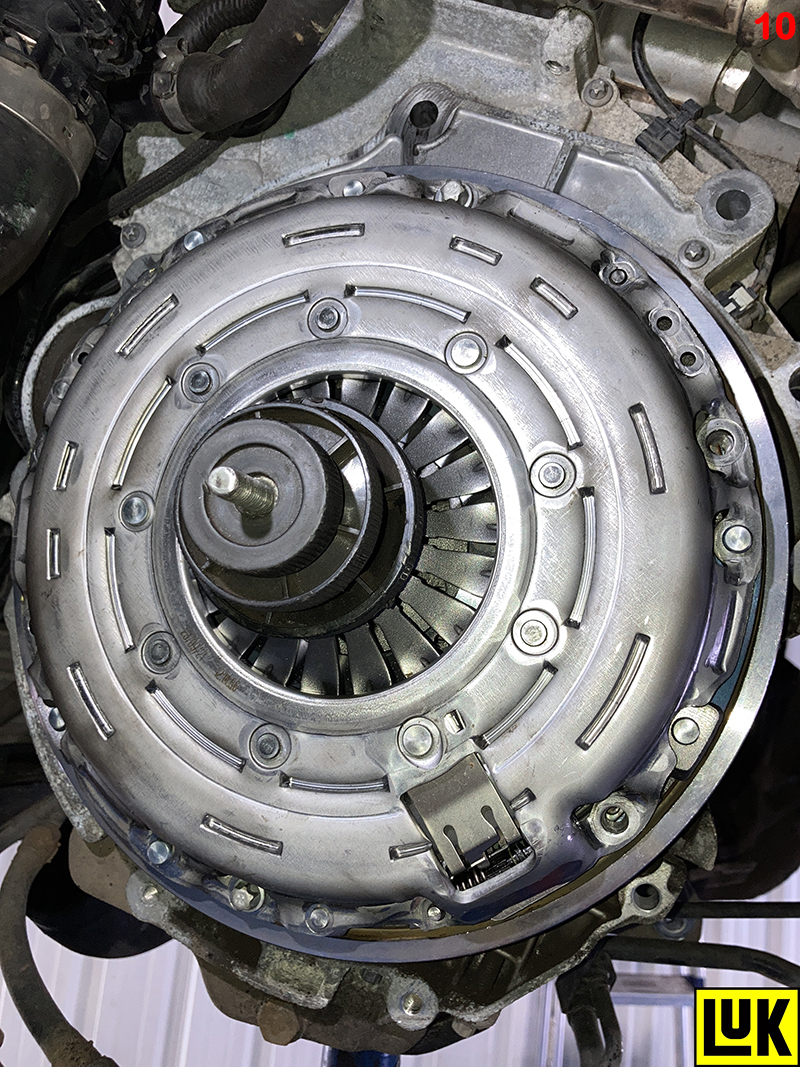 Ensure the engine to gearbox alignment dowels are installed in the engine and that pipes and wires are clear, so as not to get caught by the gearbox on insertion. Using the transmission jack, ease the gearbox into position and locate onto the dowels, using a couple of easily accessible bolts. Insert and tighten to secure the gearbox in position.

Installation is in reverse order of removal, but remember to torque the required bolts to the manufacturer’s specification and don’t forget, when the battery lead has been reconnected, to reset all electrical consumers.

Finally carry out a full road test to ensure the quality of the repair.