In this month’s Belt Focus, Gates explains how to avoid some common causes of premature drive system failure.

If the automotive drive belt system includes a water pump, it is good workshop practice to fit a new water pump whenever the belt is changed. That’s why Gates always recommends the fitting of a new water pump as part of a Gates belt kit at every scheduled replacement.

The common issue was consequential damage to the mechanical seal. Let’s examine how this contributes to premature water pump failure.

The static seal assembly is fixed into the water pump housing and does not rotate (static). Spring pressure enables it to move along the axis of the bearing/impeller shaft. A combination of spring force and hydraulic pressure from the sealed coolant ensures the seal faces are pushed together. This prevents leakage between the shaft and the water pump housing. The dynamic seal assembly is secured to the shaft. Therefore, the dynamic seal rotates with the pulley-driven shaft.

The static and dynamic seal faces are precision machined to strict tolerances of ‘flatness’. Inside the assembly, both seal faces are pushed together, which means that if the seal faces rotate against each other in a dry condition – without any form of lubrication – the combination of face friction and heat generation will create wear. This leads to premature failure because once the seal face has been damaged, any score marks will act as ‘leakage paths’ for the coolant.

This combination ensures a perfect seal between the static and dynamic rings. 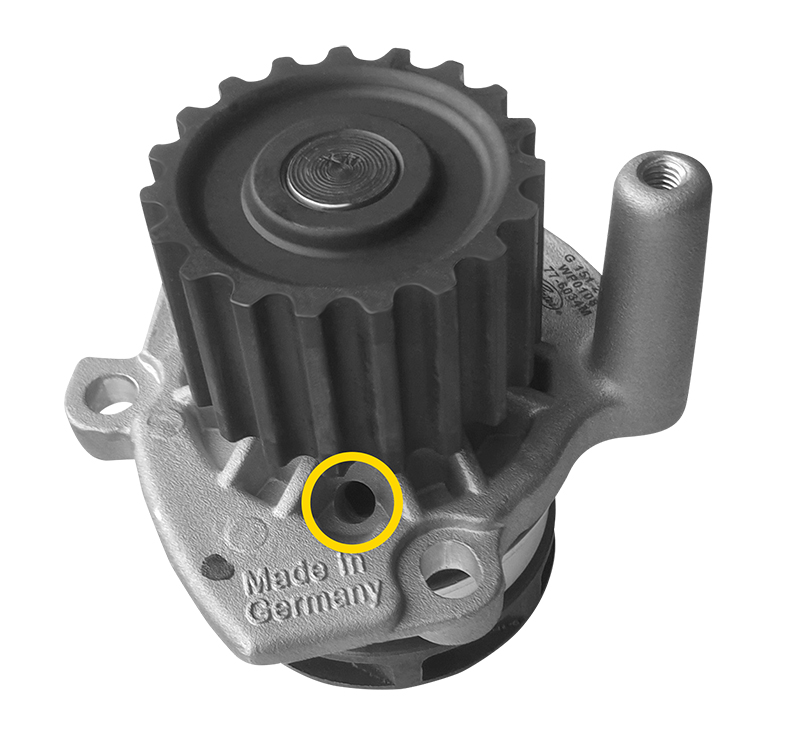 The weep hole is a small, drilled hole, usually found at the lowest point on the water pump when in the mounted position. A small amount of leakage from the weep hole is normal, particularly at start up, following installation. Not all water pumps have a ‘weep hole chamber’, but if there is one, its role is to contain and evaporate the leaked coolant. Heavy leakage means an internal seal has failed.

Discolouration and bleed marks around the weep hole and/or on the water pump body itself are signs that the mechanical seal has failed through contamination.

A new water pump is usually supplied complete with a gasket, which may be paper, metal, composite or an O-ring. The gaskets supplied are designed to be the only seal between the water pump and the engine block. Never use a liquid sealant in addition to any of the provided gaskets. It is unnecessary and will infringe the terms of the warranty.

If use of sealant is recommended by the vehicle manufacturer, use only the recommended size of bead. Any excess may be sucked into the cooling system, causing premature water pump failure.

Once the cooling system has been flushed and the mechanical seal on the water pump has been successfully primed, installers can feel satisfied that several common causes of premature drive system failure have been avoided. Once the WP is fitted, the drive system can be re-built using the belt and any metal parts supplied as part of the Gates belt kit.

✓ DO prime the mechanical seal

✗ DON’T mix different cooling technologies. It will cause a chemical reaction, destructive to the mechanical seal. It can also create gels, which coagulate and block the system

✗ DON’T use tap water as a coolant dilutant

Gates has produced a new video entitled ‘How to Install a Water Pump Correctly’. It explains the role of the internal mechanical seal and highlights the reasons why its surfaces must be ‘primed’ by a thin film of coolant as part of the installation procedure.

It urges installers to resist any temptation to spin the water pump’s impeller, manually, once it’s been taken out of the box. Dry running leads to a damaged mechanical seal and premature water pump failure.