In this month’s Clutch Clinic, Schaeffler REPXPERT Bob Carter is replacing a clutch and dual mass flywheel (DMF) in a 2013 Vauxhall Mokka fitted with a 1.7 CDTI engine.

When it entered the workshop, the Vauxhall Mokka in question had covered more than 102,000 miles and the driver reported that the clutch was ‘slipping’. A short road test confirmed the problem, and a clutch replacement and DMF test was advised.

The scheduled time for this repair is 6.5 hours and the equipment required is listed below:

Install an engine bridge to support the weight of the engine and then hold the coolant radiator in position by attaching two cable ties through the radiator and fixing them to the engine bridge, thereby preventing the radiator from moving when the front subframe is lowered. There is also an ABS wiring loom attached to the ABS unit that needs to be unclipped to allow some additional free play on the loom when the subframe is lowered.

Remove the retaining nuts that hold the engine wiring loom bracket to the top of the bell housing, detach the small bracket by the CSC and then take out the top bell housing bolts. Remove the front bumper cover to gain access the front subframe bolts, but take care when disconnecting the wheel arch trim clips as these can easily be broken, then remove the wheel arch liners and underbody tray.

Drain the gearbox oil. Disconnect the bottom ball joint and pull out the drive shaft from the gearbox; stow with cable ties out of the way. With the engine supported, remove the rear gearbox mounting and the bolts for the front mounting, which stays attached to the subframe. Refit and torque in the oil drain plug. Remove the top gearbox mounting and lower the engine and gearbox slightly to allow the gearbox to clear the body and subframe (Fig 1/main image).

Support the gearbox using a transmission jack and remove the final bell housing bolts, noting their designation, and ease the gearbox away from the engine. Once clear, with the help of a second person to lift the gearbox over the side of the lowered subframe, the gearbox can be removed and placed away from the vehicle.

At this point, it was evident that the clutch had reached the end of its service life as the three small yellow springs on the self-adjusting clutch mechanism had extended, indicating it was near the end of its adjustment.

Whenever undertaking clutch replacement, it is best practice to establish the extent of the wear to the DMF by measuring it against its specification. In addition to excessive wear, any scoring, heat damage or excessive grease loss would also require DMF replacement. In this case, although the customer had requested that the DMF was changed, when the clutch was replaced, comparison with the specification provided the reassurance that the flywheel did indeed need changing (Fig 2). 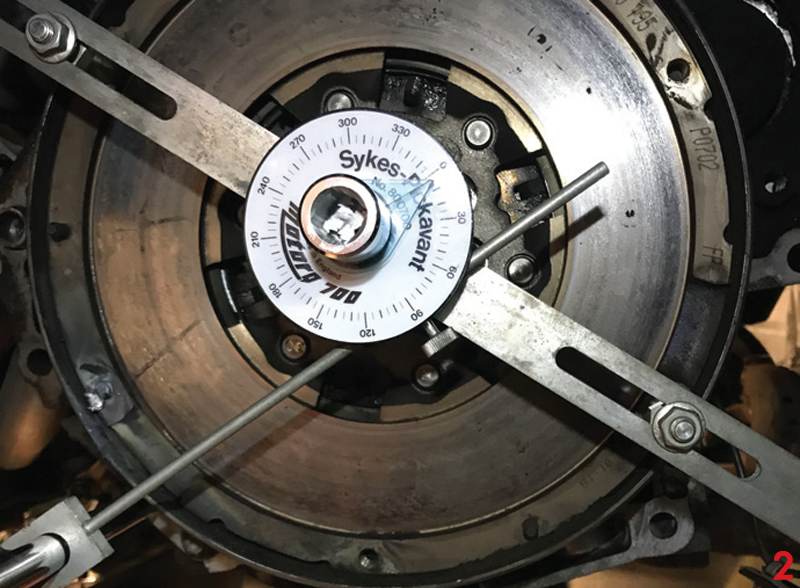 Remove the six flywheel bolts and then the DMF, which provides the opportunity to check for any leaks from the engine (oil or coolant) that could contaminate the new flywheel and clutch assembly, and to rectify them if required.

Remove any clutch dust from the engine using brake and clutch dust cleaner before mounting the new flywheel, as this could contaminate the new components, and check the new flywheel is correct by comparing its dimensions and the ring gear teeth. Mount the new DMF ensuring any alignment dowels are correctly positioned and secure it into place using new flywheel bolts, which must be tightened in an even and sequential process and torqued to the manufacturer’s specification. 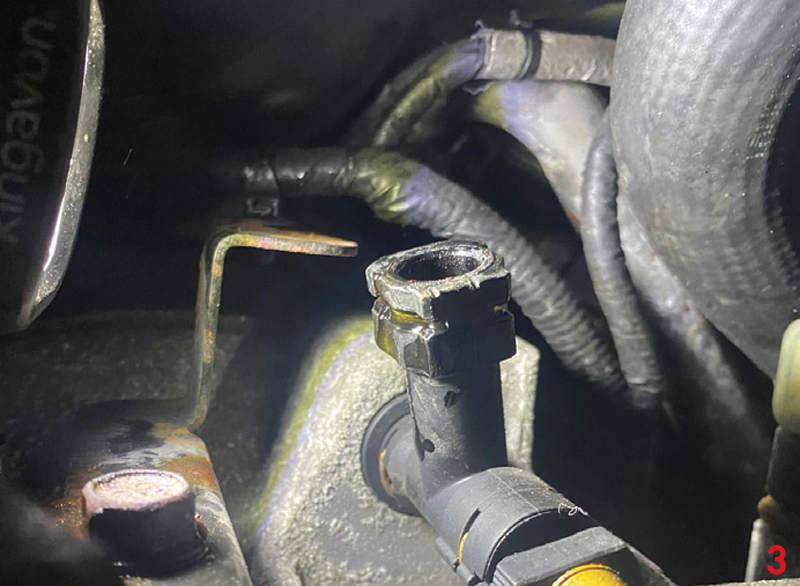 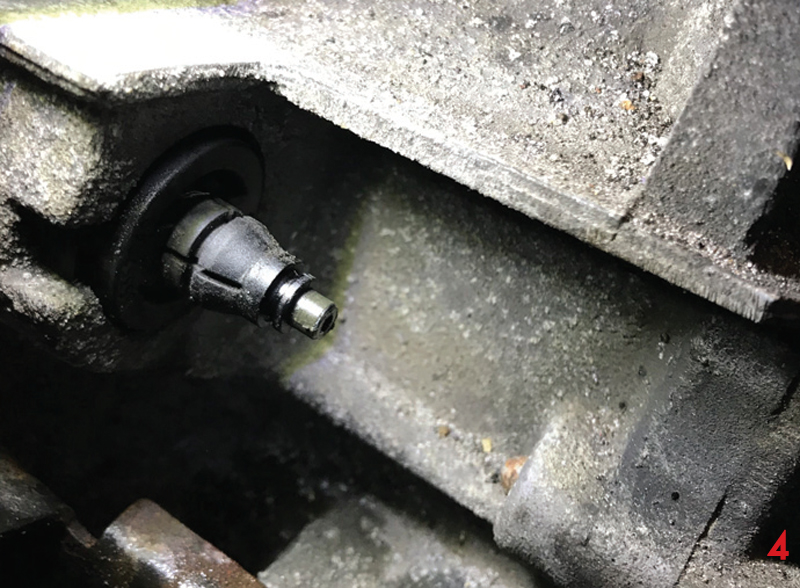 Next, look for a black rubber seal that should stay with the pipe (Fig 5). If it is not there, look for it within the three-way adaptor, because if it is not removed it will act like a one-way valve and is likely to cause the new CSC to burst on bleeding the clutch!

Then, ensuring it is mounted squarely, fit the new CSC and tighten the bolts correctly, without the use of power tools. Bolt down progressively and torque down carefully because if the mounting is misaligned, the back plate will not be secure and will leak.

Refit the black plastic location bush onto the pipe and position correctly in the bell housing. Apply a light smear of brake fluid on the new seal, and ease the connector into position until the spring clip locates correctly.

Now, fit the new clutch to the DMF, but first ensure the clutch plate is fitted the correct way with ‘Gearbox Side’ or ‘Getriebe Seite’ stamped on the centre of the clutch plate facing the gearbox.

Use the Special Tool (SAC tool) to install the clutch (Fig 6), as this does three things: gives perfect alignment, prevents the risk of de-adjustment and operates the clutch before the gearbox is reinstalled. This avoids the risk of a rejected warranty claim and the need to do the job again. 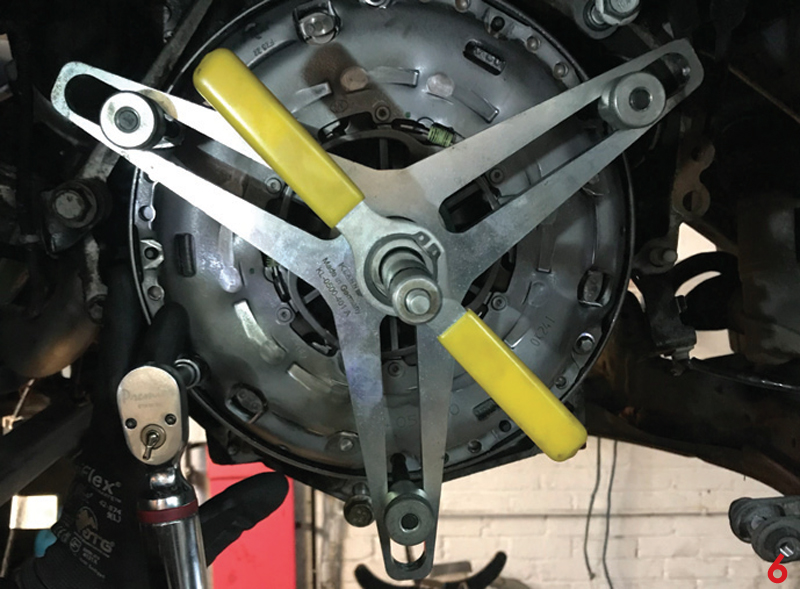 One final process before installing the gearbox is to flush out the old clutch fluid from the system by draining it into a waste container and replenishing it with new clean clutch fluid via the reservoir. When the new fluid is flowing through the system, clamp the hose, and the gearbox is now ready for installation. Finally, check that the gearbox alignment dowels are installed correctly in the engine block and that the spacer plate is aligned correctly.

Re-assembly is in reverse order of removal, but remember to refill the gearbox with the correct quantity and specification of oil and torque all bolts to the manufacturer’s specification. Bleeding the clutch is best done using a vacuum bleeding tool (Fig 7). This is recommended by vehicle manufacturers as it eliminates the risk of over pressurisation and makes it a straightforward one-man operation. 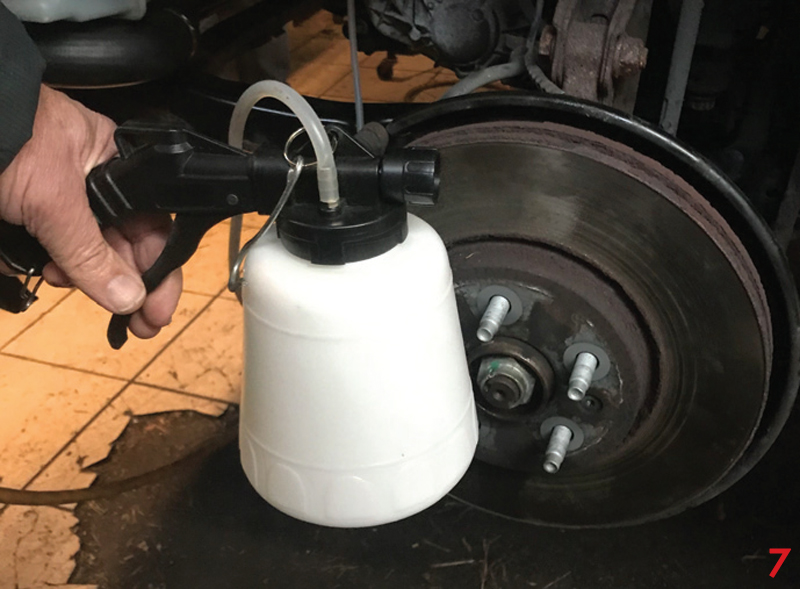 When the assembly is complete, as the battery has been disconnected, reset all electrical devices and carry out a full road test to ensure a complete and successful repair.