Pierburg manifolds, as used in modern diesel vehicles, often have swirl or tumble flaps in their inlet ports.

Swirl flaps
Swirl flaps produce a swirl alongside the cylinder axle. They are used in diesel vehicles to improve the mixing of the fuel-air mixture at low engine speeds. For this purpose, the air is fed to each cylinder through two separate channels in the intake manifold. One of the two channels can be closed with a swirl flap. 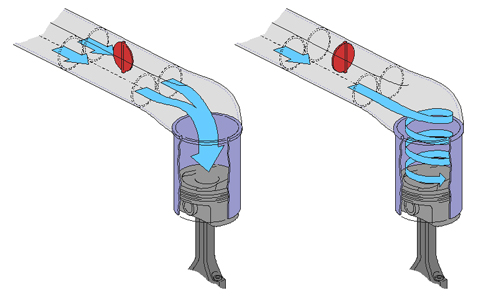 This creates a swirling of the fresh air and better mixing reduces fuel consumption and pollutant emission. At higher engine speeds and torques, the swirl flap (also known as an ‘inlet duct cut-off’) is opened to achieve a better filling level. The swirl flaps are also opened when starting the engine and in overrun conditions. In the Opel Twinport engine, their use reduces the throttle losses during part-load operation. 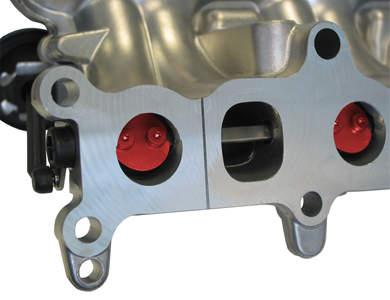 Two channels for each cylinder: Swirl flaps (highlighted in red) in the Pierburg intake manifold, e.g. in the Opel Astra J 1.7 CDTi

Tumble flaps
Tumble flaps produce a swirl alongside the cylinder axle which is achieved by either dividing the air intake channel into two separate channels (of which one channel can be closed by the tumble flap), or by turning one flap sideways into the air flow.

Tumble flaps are used in vehicles with petrol direct injection (e.g. in FSI engines) to realise a stratified charge. In the stratified charge operation, by means of this specifically produced air flow and a special geometry of the piston, the fuel-air mixture is agglomerated directly around the spark plug, and ignited. 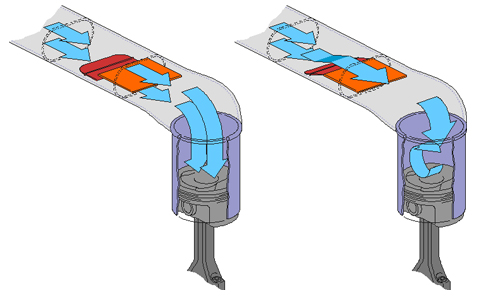 Therefore, there is clean air in the marginal areas of the combustion chamber which serves as insulation during combustion and reduces heat loss. Further reduction of consumption is achieved by de-throttling the engine.

At higher engine speeds and torques, the tumble flap is opened to achieve a better filling level. During this so-called homogenous operation, the engine functions like a conventional fuel injection engine, but with higher efficiency due to the higher compression.

This enables a reduction of fuel consumption in the low engine speed range, without sustaining losses of power or torque at higher engine speeds. Tumble flaps are also called ‘charge-motion flaps’.