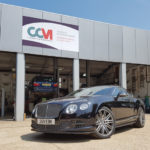 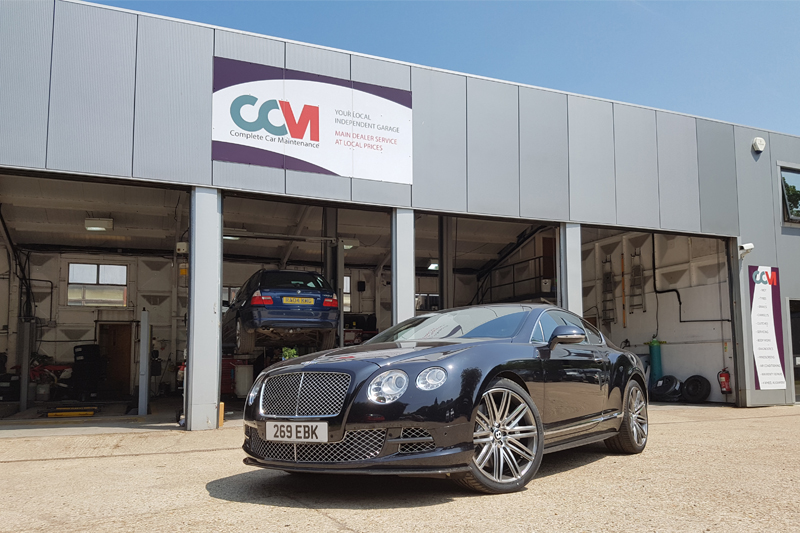 PMM heads to Ewhurst in Surrey to visit Complete Car Maintenance (CCM). In this interview, Operations Manager, Tina Drayson, and Director, Stuart White, explain how the business has grown over the last 25 years, and what the future holds for the motor trade.

PMM: How did you get into the motor trade, Stuart, and how did CCM come about?

Stuart White (SW): Well, I’d always worked with cars, so when I went to university to study business studies, I actually went with the aim of getting out of the motor trade and getting an office job! As it turned out, I came out of university in 1992 straight into the recession of the 90s, applied for loads of jobs but hardly got any replies, so ended up fixing some cars to earn some money. After about three years of this, I decided to turn what I was doing into a proper ‘business’.

I slowly built the business until I eventually partnered with Barry Babister, who at the time owned a demolition and groundwork company. This partnership enabled CCM to grow more substantially, and we quickly set about building some larger premises to house three ramps and an office. By the time this building was up and running, it was the mid to late 90s, and at this point I took on my first technician. Shortly after that, I took someone else on, then someone else, and so it continued until we had five ramps in that same building.

PMM: When did Tina join CCM?

SW: Tina came to work with us in 1999, once Barry had got out of the demolition and groundwork business, and we’d subsequently set up a bodyshop and a hire business as well. Initially, Tina came in part time to take care of the business’ finances, as we had a lot going on. 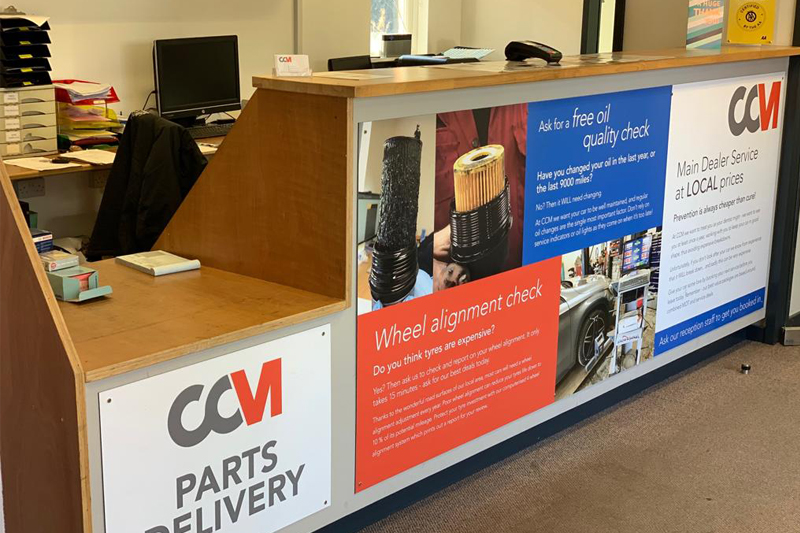 PMM: What did you do next?

SW: The next big decision was to take on a second site in Gatwick in 2002. We then spent the next six years or so focusing on building up the business at that site, particularly on the MOT side of things. This was successful, and we managed to get up to 5,000 MOTs a year.

PMM: When did you choose to expand the Surrey headquarters?

SW: In 2012, we did a huge refurb project at the Surrey site. We had closed the bodyshop down a few years prior to this, and by this point we were no longer running the hire business either, so we wanted to have a renewed focus on the workshop itself. We essentially gutted the building down to its steel frame, converted the layout, re-clad it all, put in a new roof, extended it, added new workshop bays, added the offices to the extension on one end and two MOT bays on the other. All in all, we probably spent nine months on that project – and we did everything ourselves.

PMM: It sounds like you’ve always had a business head on you. Would you say that’s the case?

SW: Actually, I was probably five or six years into doing this before I properly took stock and realised that what I was doing was running a business, and in order to do that successfully, you have to have some sort of direction. I can’t say it was a eureka moment, but more of a gradual awakening. To begin with, I worked with a local independent marketing company, which was the first time I began to focus on things like marketing strategy, and so the ‘business’ element evolved.

PMM: You’ve also had a visit from ‘The Garage Inspector’…

Tina Drayson (TD): Yes, Andy Savva came in for a couple of days in the summer of 2018 and did a day at each of our depots. He basically gave us an audit of our entire operation and made recommendations as to how we could improve. It was very useful, and as a result of Andy’s visit, we are now undertaking another refurb, as he helped us understand how we could be more efficient with the layout of our premises.

PMM: Stuart, how did Tina’s new role impact the business?

SW: Tina became Operations Manager 18 months ago, and that’s enabled us to have an even greater focus on business strategy and unifying the two sites under a common goal. All marketing and branding since then has been focused on both garages being one company. I would say that at this point in time, we are more focused than ever, and Tina’s new role has really helped us to improve our existing structure and future strategy.

PMM: Are you still ‘on the tools’?

SW: Rarely. If I am, it’s on a laptop doing diagnostics! These days I try not to ‘own’ jobs; I’ll help where I’m needed, and I’ll mentor our techs, but I won’t take jobs on for myself.

PMM: Do you miss it?

SW: No, not at the moment! My attention is needed elsewhere in the business. 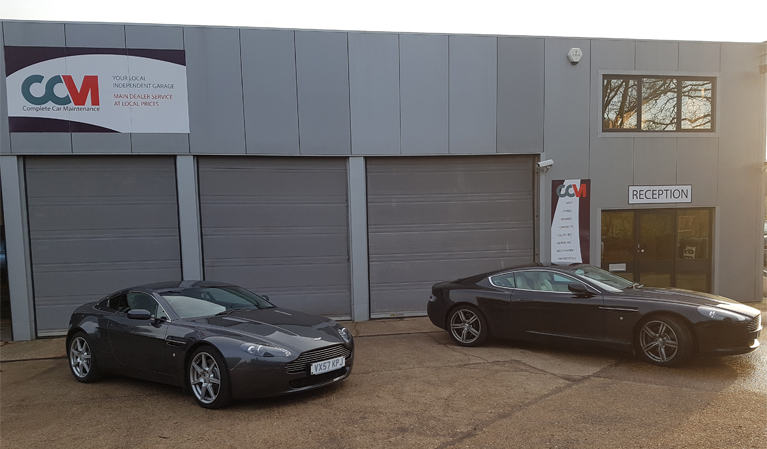 PMM: What exactly is your offering?

SW: We do cater for all makes and models, but at the moment we are building a new structure, which will give us a certain degree of specialisation. It’s very difficult and expensive to have dealer-level tools for every brand, as well as the training and knowledge required to offer the best level of service, so it make sense to specialise and offer true dealer- level service for a handful of key brands.

Under our new structure, we will have clearly defined ‘levels’ of service. For example, we will give dealer-level cover for certain vehicle brands, such as Jaguar Land Rover, VAG, Mercedes, Ford, and BMW. With other brands, we will offer a different ‘level’ of service, which might not extend to programming or accessing certain technical data, and we will be up front with the customer about this.

PMM: How do you approach training and development?

SW: We try to make use of all the training options that are on offer in today’s market. For example, there’s a lot of free training available through key suppliers. We also take advantage of online and video training – in fact, we’re currently in the throes of getting set up with an IMI online training package that we will use as CPD for our techs – and because of the numbers we have on-site, we can get technical trainers to deliver training here as well. We will also attend external training with experts in their fields, like Andy Savva, James Dillon and Frank Massey.

PMM: Hybrid and electric vehicles…flash in the pan, or the future of the industry?

SW: The way I see it, the change is happening and eventually there will be a tipping point. We’ve already had quite a few hybrids in, but a lot of what we’re doing at the moment is basic checks. We haven’t seen any substantial repair jobs yet because the cars are still so new. However, we can see that it’s coming, so we’re in the process of upskilling our techs and talking to customers who may be thinking of buying a hybrid or electric vehicle at some point in the future.

In terms of training, I actually attended the first course that Bosch ran on this subject in the UK, and I am trained to Level 2 – I think…it was a while ago! We’re also part of the ZF [pro]Tech scheme, and they do a fairly high level of hybrid training as part of the scheme. In addition, I plan to put one of our technicians on James Dillon’s course fairly soon.

SW: I think that those without the diagnostic expertise or those who can’t service hybrid and electric vehicles will be competing for a decreasing amount of ‘basic’ work, which is likely to drive prices down even further. This just isn’t sustainable, so something has to give.

PMM: Do you struggle with recruitment in today’s market?

TD: Finding the right people is a huge issue, from technicians to front of house staff. When it comes to the latter, trying to find someone with sufficient knowledge about the industry, as well as customer service and admin skills, is really tough.

SW: What it boils down to is that the industry is undervalued and under-priced. People know that they can earn more money working as a barista in Starbucks than they can in customer service at a garage, so how do we attract them?

Another problem is that the old stereotype of mechanics being the students who failed at school still exists. The reality is, though, that the job is changing and you need to be able to understand the latest technology. So the issue is two-fold: the money isn’t there to attract top talent, and the perception is still that the motor trade is for underperforming kids. Hopefully that will all change someday soon!