In opinion of Feather Diesel, many garages continue to fail when diagnosing faults because they’re not mechanically testing the systems they’re investigating.

Although electronic test equipment (especially a fault code scan tool) is often an essential part of the investigation and repair process, this needs to be used alongside mechanical devices when testing pressure pump functions and back leakage, for example, if the technician wants to get an accurate appraisal.

It’s easy to assume that this code being flagged is due to a faulty high pressure common rail pump control valve. In reality there are many other problems that can trigger this fault code, so without mechanically testing or checking the vehicle, a simple code read can then lead to a misdiagnosis.

To understand how these faults trigger P0089, the technician requires an understanding of the more complex fuel systems on modern diesel engines. Any unexpected issues in the closed loop system can cause fault codes to be generated. 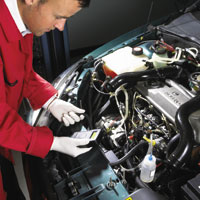 Working pressure
The ECU controls that process via a rail pressure sensor and a high speed diverter valve, to attain any working pressure between zero and maximum, simply by filling or emptying the rail.

So, ingress of air can cause pressure under or overshoots, a blocked fuel filter can delay the pressure rise, a leaking relief valve can limit pressure level, sticking control valves might alter pressures either way and injectors leaking internally under load could lead to pressure drops.

All of these can easily trigger our P0089 fault code.