Motorway.co.uk has revealed the UK’s electric car hotspots, where demand for electric vehicles (EVs) is growing the fastest.

Motorway.co.uk submitted a Freedom of Information (FOI) request to the DVLA in January 2020, to obtain registration data on electric cars – DVLA registrations are issued to new cars when they are sold for the first time.

Based on the number of new EVs registered by the DVLA in the first nine months of 2019 compared to the same period in 2018, Birmingham has reportedly seen the fastest growth in new electric car ownership of any town or city in the UK.

According to DVLA data, there were 2,192 new electric cars registered in Birmingham up to the end of September 2019, compared to 340 in the corresponding period in 2018 – an increase of 527%. Growth in electric car sales in Birmingham between 2018 and 2019 was said to be five times the UK average.

Only Doncaster, in South Yorkshire, has seen growth in electric car ownership anywhere near the levels recorded in Birmingham, over a similar time period, with almost 500% more plug-in electric cars registered in 2019 vs 2018.

The top 20 towns and cities, including Birmingham and Doncaster, have seen growth in new electric car registrations of at least 233% over the past year, which is twice the UK average of 118%.

Not surprisingly, London saw more new electric cars on the road of any UK town and city last year, with 3,308 DVLA registrations up to the end of September 2019 – an increase of 95% compared to the corresponding period in 2018. Motorway.co.uk attributes this to the introduction of the Ultra Low Emissions Zone (ULEZ) in April, which may have persuaded more people this was a good time to switch to electric.

The following table shows the 20 UK towns and cities that have seen the fastest percentage of growth in new electric car registrations in 2019 vs 2018: 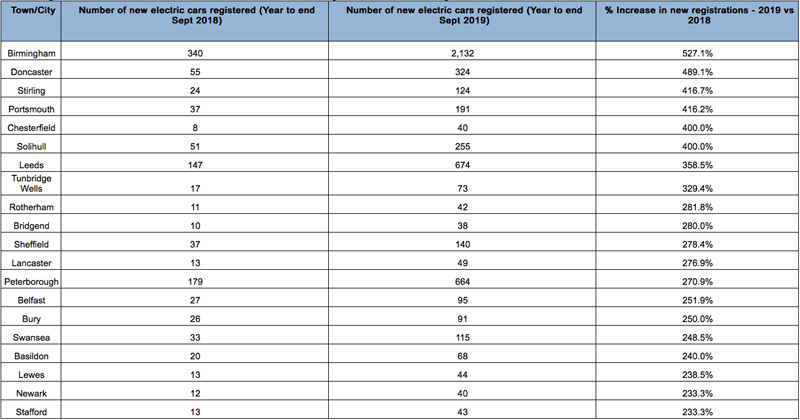 The following table shows the five UK towns and cities that have seen the biggest percentage drop in new electric car registrations in 2019 vs 2018:

Across the regions, the take up of electric cars has been particularly strong in Yorkshire and the Midlands. New electric car registrations soared by 420% in the West Midlands last year vs 2018, while EV registrations grew by 322% in South Yorkshire. In comparison, the number of new electric car owners in the North East increased by 92%.

Alex Buttle, Director of Motorway.co.uk, commented: “The government is under huge pressure to encourage switching to electric cars and these figures do suggest that car buying habits are changing, although not equally across the UK.

“Many car owners have expressed a reluctance to switch to electric until they are confident that there is a charging infrastructure in place that will be able to cope with demand.

“Although the green argument is a powerful one, and many of us would happily drive less polluting cars, too many people who rely on their vehicles every day are concerned about the number of available public and private electric charging points.

“When we polled UK drivers recently about switching to electric, an inadequate charging infrastructure was the most common reason cited by respondents as to why they wouldn’t consider switching to an electric car over the next five years.

“Now that Brexit has been resolved, and we’re expecting to leave the EU on 31st January, this should hopefully inject some much needed confidence into the new car market.

“Many consumers have been holding off buying big ticket items while the country has been in Brexit limbo. That bottleneck has been cleared and the industry will be hoping for a decent New Year-boost in sales.

“The challenge for the government over the next 12 months is not just to support a car industry that has been through tough times since 2016, but also to find a way to encourage and incentivise more car owners to buy new electric and hybrid cars now, to ensure momentum is not lost on its ambitious ‘Road to Zero’ strategy.”