From 1986 to today: how has starter motor and alternator technology evolved? Autoelectro UK Sales Manager, Nick Hood, gives a comprehensive and in-depth look at the changes and how the company has responded.

This year marks two milestones for Autoelectro: 35 years of trading and the remanufacture of its one millionth alternator. Today, the company is in a strong position, with an extensive range covering six decades, and an enviable reputation for quality, availability and being first-to-market with the latest vehicles and technology.

The firm’s commitment to starter motors and alternators is undeniable; however, to support these products over the last three-and-a-half decades, it has needed knowledge and considerable investment. Let’s take a look at what the past forty years have thrown us.

In the mid-1980s, when the company was founded, the technology crammed into a starter motor or alternator was comparatively basic to today, with limited part numbers needed to support the majority of vehicles on the road.

For example, alternators were low output, simple designs that produced less than 50 amps voltage, which could be easily measured and was consistently generating between 13.8v and 14.4v. It was also directly linked to the ignition light, with a 12v feed providing the exciter to the alternator and easy diagnosis as to whether the alternator functioned or not.

The same could be said for starter motors: they were similarly straightforward, with inertia types still prominent. Pre-engaged solenoid starter motors were the ‘new kids on the block’, but, again, the technology was elementary. As such, every town boasted a local business offering renovation, repair or remanufacture. 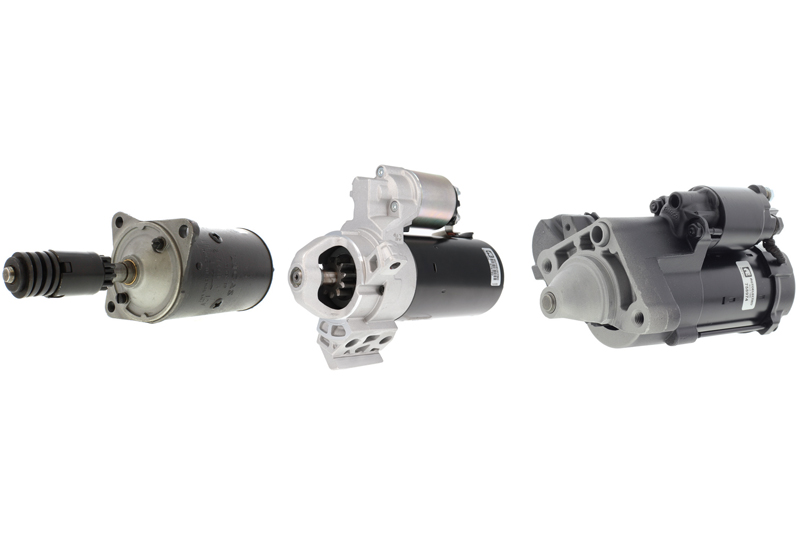 Move forward to the 1990s, technology within starter motors hadn’t developed, but the same couldn’t be said for alternators: these were starting to improve, as power demands increased with vehicles having power-consuming features, such as electric windows and air conditioning – amp ratings had surged to around 100 amps.

Unfortunately, poor design and quality, not confined to the starter motor or alternator, caused a lot of problems back in the nineties.

Fuel injection and basic engine management had started to surface and, consequently, that improved vehicle starting. The old inertia and first pre-engaged solenoid starter motor would ‘crank’ a vehicle over for a sustained period of time, without consequence, and were heavy and robust to allow for this. As reliability improved, the opportunity came to revise the design.

By the late nineties, engine management and fuel injection were commonplace, which allowed for better starting, and with the increasing demands for styling, comfort features and fuel economy, starter motors were redesigned to be more compact and lightweight. To achieve this, geared starter motors were introduced.

As the vehicle was more likely to start instantly, the design changed, with less reserve built-in for long periods of cranking. Alternator capacity was also increasing, with even more electrical systems to support the likes of ABS, power steering, sunroofs and seats.

Into the new millennium, the demands on the electrical systems were further increasing and to support this, whilst not being detrimental to engine performance, changes to the charging system were introduced, such as smart charging, where the vehicle ECU/engine management communications with the alternator to regulate the rate at which the alternator charges and at what time.

The alternator was also improved to support higher amps and voltage; for example, an ECU could demand a much shorter higher output up to 17v, which could be achieved on deceleration and not have negative effect on vehicle performance. Now, the ignition light on the dashboard had no real input in the process, as it was controlled by the ECU. With amps around the 200 mark, some units struggled with cooling, so vehicle manufacturers introduced watercooled alternators.

Towards the end of the decade and into a new one, the influence of emissions control started to make a strong impact, which has caused some of the biggest changes in design and performance of starter motors and alternators.

Stop-start technology resulted in starter motors that contain two solenoids, to assist with the re-engagement of the starter within the restart process. Another change came in the form of permanently engaged starter motors, where the pinion gear runs in mesh, with a clutch within the starter to engage drive on starting and restarting.

The most noticeable change has been the combination starter motor and alternator, which appears to be an alternator but also starts the vehicle using the auxiliary drive belt. In addition, with the influx of hybrid vehicles, some alternators have evolved further, with dual circuits controlling the vehicle’s 12v system and another higher output supporting the hybrid charging system.

The requirements for this type of product specialism and remanufacture that Autoelectro support is vital, as starter motors and alternators become more vehicle-specific and specialist – for example, a Lotus Evora – therefore, the only way to support some applications is through the remanufacture of the original. Increasing technology, coupled with low productions runs, means that the copy replacement product is less viable to manufacture.