Price, availability and OE quality were just a few of the issues debated at a recent Original Equipment Suppliers Aftermarket Association (OESAA) demonstration, hosted by Corteco.

To further illustrate the differences between genuine OE-standard products and those of a lesser quality, OESAA has used its presence at trade shows – such as MECHANEX – to give technicians the opportunity to see things with their own eyes.

On show from Corteco were two engine mounts. They both fitted the same vehicle, but from the inside they looked very different.

Early vehicles were launched with engine mounts that were little more complex than a block of rubber, with a bolt sticking out of either side. Technology has marched on. The engine mounts on today’s models are, therefore, far more complex.

“What you have now are very complex components that ensure that the vibrations from both the suspension and the engine are absorbed,” says Corteco’s Business Development Manager, Carey Owen. 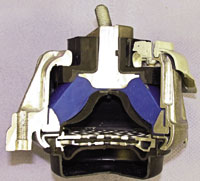 A cross section of the OE engine mount showed just how complex the technology inside has become. Inside is a series of chambers. An alcohol-based substance moves between these chambers according to the speed and movement of the suspension and the engine under load.

If the driver happens to be behind the wheel of a sport model, the mounting may also be equipped with an electronic switch. Press this and it changes the way the mounting performs in preparation for a change in handling conditions associated with the anticipated changes in speed and road surface conditions.

“While a lot of mechanics will appreciate the need for greater vibration control on the suspension, not all expect to find that there are additional controls that are also applied to the engine,” he adds.

In fact, every component that’s equipped with some form of vibration control – whether it’s the suspension, the engine or the gearbox – needs to be able to be tightened/stiffened if the driving conditions are set to become much more demanding.

That’s why Corteco – the distribution arm of the Freudenberg group, which is one of the world’s largest OE manufacturers – is advocating OE quality part replacement every time. That’s when the issues of price and availability are usually raised.

One workshop was surprised to learn that, rather than sourcing them from a dealer, these parts are also available through their local motor factor. Another pointed out that there were certain aftermarket brands that were always much cheaper: “You can get them for up to half the price,” he claimed.

“I’m not surprised,” said Carey, holding up the lower quality engine mount. “If on the inside they are anything like this, they have half the parts missing and cannot possibly do the job. In this case, you’re not paying for OE quality, you’re paying for 40-year-old quality.”

Registration is simple, visit http://www.mechanex.info or call 01923 237799. For all the latest news and info on upcoming shows, follow @MechanexShow.