Following on from the article in February, this month, HEVRA’s Pete Melville deconstructs current EV battery technology into its constituent parts.

A battery consists of two electrodes – these are connected to the positive and negative terminals on the outside of the battery, and some chemistry in between. The battery does not store electricity as such, but instead a chemical reaction occurs inside during charging, and the opposite reaction when discharging. The cell voltage depends on the chemistry – all lead-acid cells are 2V (open circuit voltage of 2.1V), Nickel-Metal Hydride (Ni-MH) are 1.2V, and lithium ion or lithium polymer are generally around 3.2-3.8V depending on the exact chemistry used. In order to increase the voltage, such as in our 12V car battery, we need to join cells together in series, i.e. 6 x 2V cells.

Using a higher voltage means we can use less current to make the same power, reducing the thickness of the required wiring and increasing efficiency. Hybrid cars normally use a high voltage battery between 150V and 300V, and plug-in vehicles are normally 300-400V.

Nickel-Metal Hydride, or Ni-MH, is a popular rechargeable battery technology often found in household rechargeable batteries. It is considered inexpensive and safe compared to other battery technologies, and was used in some electric vehicles of the 1990s, such as the GM EV1 and the Toyota RAV4 EV. The patent for the Ni-MH battery was purchased by oil giant Chevron-Texaco, who, in 2002, decided it would not licence the technology for electric vehicle use, in order to protect the sales of oil-based fuels. However, the company would allow the technology to be used for hybrids, and it is still used in some today.

The Chevron ruling could have been a stumbling block for electric vehicles, but a newer technology, lithium ion, came along. This not only avoided the oil company’s patent licensing, but it was also better. Firstly, it has a higher energy density, meaning for a given size and weight of battery, it can store more electrical power. Secondly, it had faster charging capability, making it more suitable for topping up on long journeys. Thirdly, the self-discharge is virtually non-existent, so you can park a car at the airport for a week (or a year) and it won’t have lost a noticeable amount of its battery charge. Lithium-based batteries are used for all modern electric vehicles, and some hybrid vehicles. 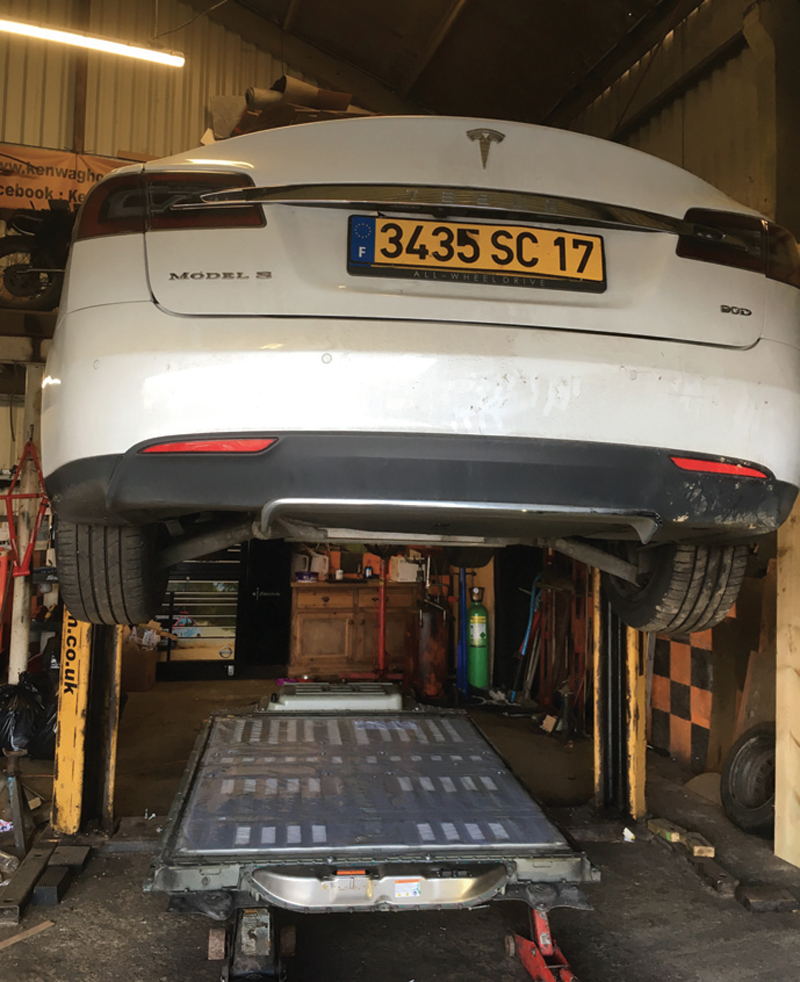 The exact mix of materials used for the electrodes and the electrolyte in the Li-Ion battery can make a difference to its energy density, charging and discharging rate, rate of degradation (wearing out) and cost. Each manufacturer has its own recipes with its own benefits, and it’s thanks to little tweaks that have allowed cars such as the Renault Zoe and BMW i3 to double their battery capacity without making the battery any bigger.

In order to get the required voltage, we need to string lots of batteries together in series. Typically, an EV battery has 80-100 cells in series. We can also put cells in parallel to increase the capacity without changing the voltage. For example, a battery may be described as having 92S4P configuration, which means it has 92 cells in series, and four in parallel (368 in total).

In order to build the battery pack, most manufacturers build a few cells together into a module. The module may also feature circuitry to measure the cell voltages and temperatures. The battery pack is then made from several of these modules.

Also within the battery pack is the heating and cooling system (if fitted), the contactors (relays) for switching the pack on and off, and an ECU that controls the battery functions, such as cell balancing.

Imagine an old car with two 6V batteries making a 12V system. If you connect a 12V battery charger, this will, in theory, charge both batteries equally. However, imagine if one battery is at 5V and the other at 7V. The charger will deem the total (12V) to be satisfactory, but charging will risk overcharging and damaging the battery that is already at 7V, whilst the other battery at 5V is not going to store much energy. For this reason, it is important to balance cells, in order to protect the battery and to squeeze in the full capacity. In this example, a resistor is connected across the 7V battery to reduce its voltage, therefore reducing the risk of overcharging, whilst also putting more energy into the other battery. In reality, the differences are generally a few millivolts, and the resistors have high values and therefore small current flows.