The skills shortage and lack of young talent coming into the industry are two very difficult problems to solve. Apprenticeships have been thought of as the solution for decades now, but are they the best option? Neil Pattemore puts his thoughts to paper.

It’s an enigma – no, not the World War II German encryption machine, but the paradox between attracting the current school leavers to fulfil the skills shortage that faces the UK aftermarket, and the needs of its business models of today and tomorrow. Although I am perhaps stretching this analogy to its limits, cracking enigma some 80 years ago required a ‘thinking outside the box’ approach, and I would argue that the same mindset is required to solve the problem we are currently facing.

Classically, apprenticeships offered the combined college ‘day-release’ and ‘on-the-job’ training to provide the foundation for the workshop technicians. However, this is based on the premise that the person involved has already decided that the job they want is to repair vehicles, but this type of job may not be on the radar of the type of person now needed for the future, and even if it is, is it a sufficiently attractive proposition?

The ability to understand the mechanical aspects of a vehicle remains vitally important, but the need to understand the software that controls almost all functions of the vehicle has become the basis for identifying what is wrong and how to fix it. This has moved beyond simply ‘mechatronics’, which demanded a good understanding of electrical circuits and electronic control, into the world of software and IT. So, what are the wider challenges that this will bring and are apprenticeships still the right way forward?

This whole process often starts with guidance from the school and the opinion of the youngster’s parents, so if the employer (i.e. you as an independent workshop) wants to attract the type of person you now need to employ, then there is a significant challenge in changing the perception that a vehicle repair requires only a mechanical repair.

The automotive industry has increasingly moved into the IT world, where the vehicle has become a sophisticated ‘smartphone on wheels’, and the diagnostics and repair increasingly include IT-centric processes.

Training colleges offer a wide range of courses and it is frequently stated that these are based on ‘employer-led’ requirements, but if the type of individual is not attracted to the industry, and especially the independent sector, then the colleges cannot train them for the employers.

The UK Government’s ‘Skills for Life’ initiative offers ‘Digital’ training courses, but these are not focused on the automotive sector and do not mean that whoever achieves a qualification would consider the automotive aftermarket as their next workplace. This is one of the fundamental aspects of the enigma as most IT training is based on computer sciences and not on the needs of the automotive industry, which is now competing against the IT sector to attract the skills it needs. 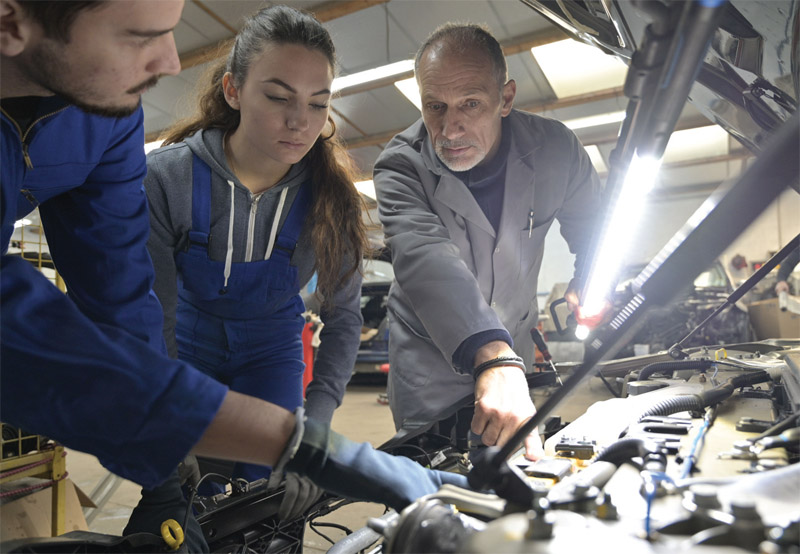 Where will the talent come from?

Following the Queen’s Speech on 11th May, Steve Nash, CEO of the Institute of the Motor Industry (IMI), wrote an open letter that highlighted some of the key issues:

“Currently, just 5% of the automotive sector is qualified to work on electric vehicles – and the fact that the current apprenticeships across the UK do not comprehensively include skills in diagnosing and repairing ADAS or electric vehicles makes upskilling the sector a mammoth task. The IMI is working closely with the Employer Panels for automotive apprenticeships to address this issue, but unlike the pace of change expected by government, it is not as fast-moving as the sector needs it to be.

“Putting aside the need for the automotive apprenticeships to catch up with technology, right now the focus has to be on simply attracting and supporting new talent to the sector. The latest data from the Department for Education shows that automotive apprenticeship starts for August 2020 to January 2021 have been more adversely affected than most other sectors at 53% lower year on year. And there has been a significant decline in the number of apprenticeships supported by ASA levy funding – 64% lower year on year.”

However, even if you are successful in identifying a potential ‘IT-centric’ candidate, another aspect is how to identify if your investment in them will be rewarded. This remains a perennial problem of analysing not only their technical potential, but importantly their aptitude, as the human brain does not fully mature until the mid-twenties, so even psychometric testing has limitations in identifying the best apprentices.

Unfortunately, you will not be alone in trying to find (and keep) good new talent!

A question of appeal

Equally, for a young person, the attraction of working for a main dealer is probably more appealing than an independent workshop, so you are going to have to be active in promoting yourselves as a good place to work and develop a future career. Consider working with local schools, hold ‘open evenings’ for parents and their (talented) children, and write job descriptions that highlight the ‘techy’ and IT-centric nature of the job, and only then ‘expose’ that the reader may be surprised to learn that this is working in a vehicle workshop on vehicles with sophisticated software and systems – perhaps asking: ‘are they up to the challenge?’.

The next hurdle to vault is how to integrate the apprentice into the existing team of technicians. The candidate (as an apprentice) needs to see that working on vehicles is an attractive alternative to working in a more conventional IT environment, with corresponding status and benefits, but this may be a difficult balancing act with the existing team in the workshop.

The national skills shortage and the need to attract young talent will lead to a change in your business models. It will become inevitable that you will need to offer similar salaries and benefits to those offered by main dealers, together with the tools, equipment and the training needed, which in turn will raise your costs and hourly rates. In simple terms, you will need to emulate the competence and environment of a main dealer. If you don’t, then you will not have the talent needed and will become increasingly uncompetitive.

The good ol’ days of using an apprentice to do the most menial of jobs is changing, but the biggest challenge will be promoting the automotive aftermarket and especially the independent workshop as the place for young, ambitious and ‘techy’ apprentices to develop their skills and value. The future of your business is becoming dependent on finding the right apprentice!

For more information on the topic of automotive apprenticeships, click here.
Tags:ApprenticeBusinessNeil PattemoreTraining

0 0
Previous : NGK Spark Plugs targets carbon neutrality
Next : How garages can prepare for the MOT wave