The experts at MAHLE explain why a pro-active approach to maintenance and replacement can breathe new life into HVAC systems. 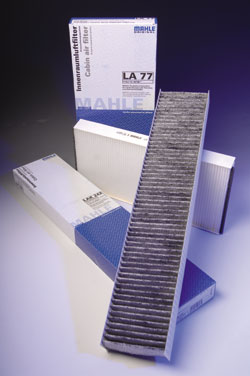 Almost all passenger cars, vans and most heavy commercial vehicles are now fitted as original equipment with cabin filters that feature a layer of special active carbon sandwiched between two fleece layers. Without this protection, drivers would be subjected to concentrations of pollen and traffic pollution six times greater than at the roadside. This is mainly due to the so-called ‘tunnel effect’, whereby the exhaust fumes of vehicles in front are directly drawn into the passenger compartment, along with other irritant gases (ozone), toxic gases (fertilisers) and diesel particulates. Unpleasant gaseous smells are deposited in the carbon pores, which are interconnected like a sponge.
Because they work hard for their living, cabin filters need replacing at least every 9,000 miles, as stipulated by VMs. When replacement is due, it is also possible for workshops to upgrade older vehicles – still fitted with more basic pollen filters – to carbon-activated cabin filters, as they’re made to exactly the same dimensions as the original parts.

What causes bad smells and bacteria?
The cabin filter is now an essential component in the air conditioning or HVAC system. Refrigerant circulates through the HVAC system in liquid form under high pressure. When the system is switched on, the refrigerant enters the evaporator.
Because it has a lower pressure level, the highly pressurised refrigerant expands and evaporates from a liquid into a gaseous state. This draws heat from the surrounding air. As a side effect, the air flowing into the interior of the car, which flows around the evaporator, cools down and flows through the cabin filter into the cabin as fresh air.

When warm air is cooled down, some of the water contained in it condenses; we all know this effect from bottled drinks. When they’re taken out of the refrigerator in summer, the warm air around the bottle cools down. The water contained in the air then condenses on the bottle in the form of droplets. Water condenses on the AC evaporator in the same way. It flows off and therefore forms a little puddle under the vehicle in summer, but some residue remains.

If the HVAC system is switched on regularly, this is not a problem. New condensation water forms and washes away the old. If the HVAC system goes unused for a long period of time, a small moist biotope gradually develops in which foul-smelling bacteria can breed. When it is finally switched on again, this air is initially blown into the interior of the car. This is not only unpleasant to the nose but also a hazard to health – precisely because of these bacteria. 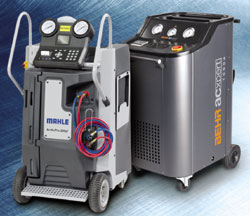 What can be done about it?
The simple answer is to carry out an HVAC check. Workshops should interrogate the HVAC system for leak tightness, replace the refrigerant (if needed) or top it up, and change the cabin air filter. HVAC servicing disinfects the air channels and the evaporator, which is good for both the wallet and your customer’s health. After all, a properly functioning HVAC system saves fuel.

Remember, preventative maintenance costs less than a repair of the entire system so this is an important message to impress upon your customers.