In the quest for improved fuel economy, manufacturers are developing engines that run on ever thinner grades of oil. As such, modern engines are manufactured with tighter tolerances to run with these oils.

Why thinner oils?
The reason for thinner oil is to reduce viscous drag and thereby increase fuel economy. At a microscopic level, the oil in contact with a crankshaft journal rotates with the crank while the oil adjacent to the main bearing shell remains stationary. This sets up a shearing action across the oil film and the more viscous (thicker) the oil, the greater the drag. A similar effect occurs in the oil galleries as lubricant is pumped around the engine. The oil, in contact with the stationary wall of the oilway, remains at rest while the bulk of the oil flows through the system, creating a shearing action within the oil. 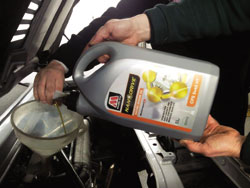 But isn’t the effect too small to be significant?
Well, industry research points to a directimprovement of two percent in fuel consumption by simply replacing a 5w30 multigrade oil with a 0w20 grade, so there is a strong incentive to use thinner oils. There is also a hidden danger because a thinner oil, though releasing more power, risks increased wear.

Is there a limit?
Under operating loads, as an oil gets thinner, the metal surfaces that it is keeping apart move closer together. Eventually the oil film is no thicker than the roughness of the surfaces and metal-to-metal contact occurs. This is called ‘boundary lubrication’ and typically leads to a big jump in friction and an increased risk of wear. These conditions exist between piston rings and cylinder bores and at various points in the valve gear. They also exist in the crankshaft bearings as they begin to rotate during engine start-up, so modern engines with stop-start technology see these conditions much more frequently. 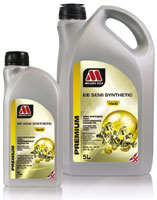 The EE range derives its performance from the use of nanoparticles within the formulations. The particles used have some very special properties that make them uniquely useful as lubricants for extreme conditions. A nanoparticle is so small that its size in relation to a football is the same as the football is in relation to the earth. As a particle becomes smaller, the ratio of its surface to its volume increases. This allows the nanoparticles to be much more reactive than larger particles, able to react with and adhere to microscopic irregularities on the metal surfaces of loaded engine components. The particles used in Nanodrive oils are nested around each other, like the layers of an onion, and able to peel off under pressure, shedding a slippery, protective film over the metal surfaces to reduce friction and wear.
As the contact load between adjacent engine parts increases, the frictional properties of the nanoparticles actually improve, behaving like billions of minute ball bearings and protecting the surfaces under both static and dynamic conditions. The nanoparticle formulations developed by Millers Oils are claimed to reduce both running temperatures and wear rates and are fully compatible with existing Extreme Pressure and Anti-Wear additives used in current lubricating oils.