Vehicle manufacturers rely on a host of electronic components to achieve cleaner combustion, but as these components have to operate in some of the most hostile environments of the vehicle, they are highly prone to failure. Elta discusses the exhaust-related components that generally fail most often and why they do so.

DPF regeneration requires extremely high temperatures for soot to be removed from the DPF by combustion. When normal driving conditions do not allow for this temperature to be reached in the exhaust system, additional processes must be introduced to raise the heat. Traditionally, post-injection of unburned diesel fuel into the combustion chamber provides the catalyst and raises temperatures. However, this has been found to cause oil dilution, leading to premature engine wear or more frequent servicing.

Fuel vaporisers go some way to solving this problem, lowering emissions whilst prolonging engine life. Rather than being injected directly into the combustion chamber, fuel is directed to the fuel vaporiser. The vaporiser then uses an integrated, electrically heated glow plug to evaporate the fuel before injecting it into the exhaust gas stream ahead of the catalytic converter/diesel oxidation catalyst. Following this, vaporised hydrocarbons are burnt on the catalytic converter, releasing energy from exothermal chemical reactions and raising the temperature before the DPF, allowing for regeneration to occur without oil dilution or the need for additional cooling. Lambda sensors were first fitted to cars in 1977 to improve the efficiency of combustion engines and help
to reduce harmful exhaust emissions, such as carbon monoxide.

Lambda sensors operate by measuring the amount of oxygen in the exhaust. An efficient engine requires a specific amount of air and fuel in its cylinders at combustion, with the perfect ratio being 14.7:1 (14.7 parts air to 1 part fuel). The levels calculated by the lambda are sent as data to the ECU, which then determines how best to achieve the ideal mixture of air and fuel at combustion.

Many will simply fail due to age. The lifespan tends to be 45,000 miles for an unheated sensor. However, a heated sensor can typically last closer to 100,000 miles.

The exhaust gas temperature sensor is a thermistor element fixed in cement to protect it from vibration. Changes in temperature affect the resistance, and this is communicated to the ECU as a voltage. Exhaust gas temperature sensors protect vital exhaust components from overheating and help to control emissions. They are also used in several combustion control processes in both diesel and petrol engines, including selective catalytic reduction, turbo boost, exhaust gas recirculation and DPF Regeneration. 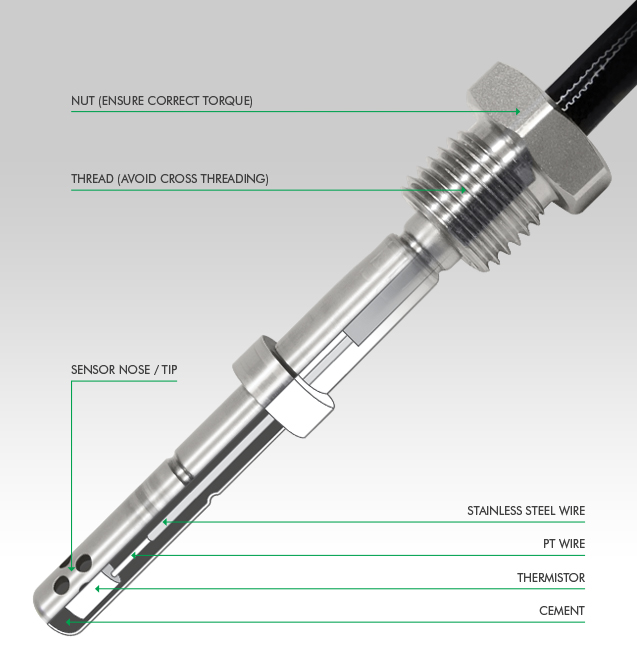