Scantec Automotive’s Ross Kemp presents a recent case where knowing the details of a specific brand’s various electrical systems is the only way to prevent unnecessary costs and delays.

As a diagnostic technician, it is clear to me that when it comes to the art of diagnostics, you cannot place enough importance on brand and brand-specific knowledge and data. The clear rate of acceleration in technology and software found in today’s vehicles only confirms to me that to achieve and maintain the level of knowledge required to be a competent and efficient diagnostic technician, you need to limit the brands that you work on.

A recent vehicle that we were asked to look at highlights this for me.

The vehicle in question was a BMW M3 and had been delivered to our workshop with the reported symptoms of non-start with no engine cranking possible. Previous attempts to repair this fault elsewhere included a new steering column (with inbuilt steering lock) and a new remote key. It also had the accompanying comments: “the steering lock is being switched and we think it may need a new CAS Module”.

On initial visual inspection, we noted that both the new and original keys were accepted and recognised when placed into the ignition slot – this was confirmed by the keys latching into place, as this would not happen if the key had not been recognised for any reason.

Therefore, we had confirmed in less than five minutes (and with no diagnostic tools) that the fault on this vehicle was not key related and the vehicle did not require the new key.

We noted no action or noise from the new steering lock, and we were unable to activate terminal 15 (ignition). At this stage, an initial diagnostic fault code assessment is reasonably limited due to the lack of ignition activation. This is because many control modules would not be receiving either a hardwired T15 or a network transmitted T15 wake-up command. Therefore, understanding which modules should be responding is important, because we had a long list of modules that were not responding, some of which may be required to enable ignition and/or starting.

The initial fault scan had to be filtered. Many of the faults were from modules that were online but were logging faults because of missing data from modules that were not online. In our case, all the modules required for initial activation were present and correct, and the only fault considered relevant was found in the CAS module (00A103 – CAS: Immobilizer bus fault).

The Car Access System module (CAS), as the name suggests, is predominantly responsible for vehicle access type functions like remote lock and unlock signals, immobilisation, and terminal control, and is also responsible for the steering lock management.

In basic form, when placing a remote key in the key slot, the CAS will detect the insertion of the key and power up the loop aerial, read the key’s embedded transponder data, check the key data to confirm it matches one of the 10 factory pre-programmed key data slots, and if it does, the key will lock into the key slot as mentioned above.

For us (as first noted on visual inspection), we could see that the keys were recognised and locked into place, however, we heard nothing from the new steering lock. So, we gained access to the lock’s wiring and carried out an initial scope test of the circuit (Fig 1).

Again, it is important to understand what to expect and when to expect it. By design, the steering lock assembly has a permanent ground (used for internal control module circuit), a communication line (Bus Signal), and two motor current carrying wires.

Due to the safety implications of having an electrically operated steering lock, BMW has designed the system so that the motor (when not being operated) has neither power nor ground supply. This means the CAS module is required to switch power and ground to the lock motor assembly when it wishes to operate it.

It can be seen from the test that the CAS module does indeed supply power and ground to the new lock assembly with three attempts before giving up. But, note! There appears to be an issue relating to no activity on the Bus communication line, and it also appears to be stuck at approximately 5V.

Initial checks against the wiring diagrams (Fig 2) and specifications of the vehicle suggested that on this model, the communication line was only involving the CAS module and the steering lock module assembly. However, disconnecting either one of these two modules did not show any change to the signal line voltage. Therefore, it was pretty safe to assume that we had a wiring fault. 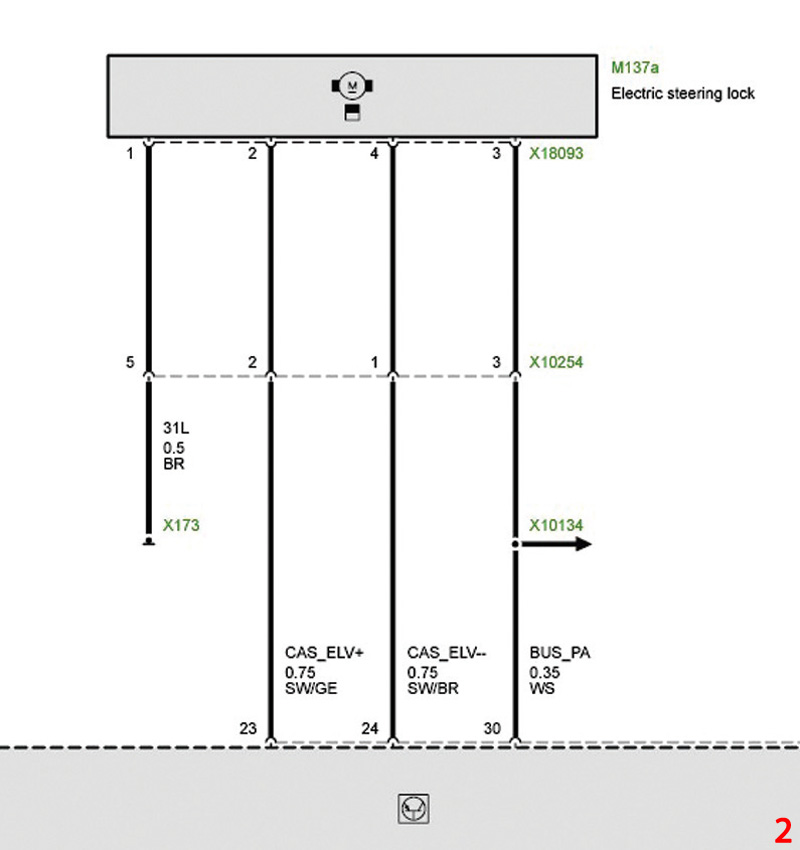 A fault in the wiring

Further checks against the wiring diagrams (when not filtering out specific vehicle specification) confirmed that on vehicles fitted with the Comfort Access Module (which this vehicle did not have), the Bus communication line in question would also be wired to this module.

A quick look at the empty space where the comfort access module should be showed a redundant connector with green corroded connectors. A closer inspection confirmed that a battery voltage supply terminal was being partially shorted across the Bus communication line, causing sufficient voltage on the line to prevent the CAS module from communicating with the steering lock.

A quick clean-up of the electrical plug, and the retest showed that the CAS module was still switching both power and ground to the steering lock module but could also be seen actively communicating. As a result, we could now see and hear the steering lock operate. With the CAS module receiving its required feedback, it was able and willing to activate terminal 15 ignition (Fig 3).

Understanding the system and the way it operates is normally the key to comprehending why it is not operating correctly. In this case, the first thing to take onboard is that if it had been realised that the key would not be locked into place if any part of the key reading and pre-checks had failed, then it would have saved the cost and delay associated with an unnecessary new key.

We also factored in that a steering lock supplied with a switched power and ground is insufficient when the communication is not present, as the switched supplies do not actually activate the lock motor directly without the accompanying command signal.

Therefore, if it had been realised before the vehicle arrived here that the CAS module requires a successful unlock confirmation from the steering lock in order to activate the ignition, then the owner may have saved additional costs involved in replacing the complete steering column.

0 0
Previous : The process of glow plug replacement
Next : How CPD fits into MOT training