Engine combustion is a fascinating topic to gain an understanding of, particularly when comparing compression and spark ignition. It’s not hard to see the convergence and similarity between gasoline (Direct Injection) and diesel (Common rail) engine fuelling systems and combustion. For the purposes of this article, however, we’re going to take a detailed look at spark ignition engines.

For spark ignition combustion, the mixture is generally prepared completely prior to combustion (outside of the combustion chamber, except for gasoline direct injected engines) – the fuel is introduced to the air – fully atomised – and in theory, this mixture should be uniform in its distribution (so called ‘homogeneous’). The amount of fuel in proportion to air should be chemically correct. What this means is that there is enough air, containing oxygen, to fully oxidise or ‘burn’ all of the fuel’s volatile content. This sounds quite straightforward but, in practice, it is not that easy considering all the operating conditions that a vehicle engine has to encounter.

This mixture is compressed in the cylinder and as the cylinder volume decreases due to the piston rising towards top dead centre (TDC), the pressure and temperature increases – roughly according to simple gas laws – but it is critical that the temperature does not exceed the ignition temperature of the fuel/air mixture, or uncontrolled self-ignition will occur! 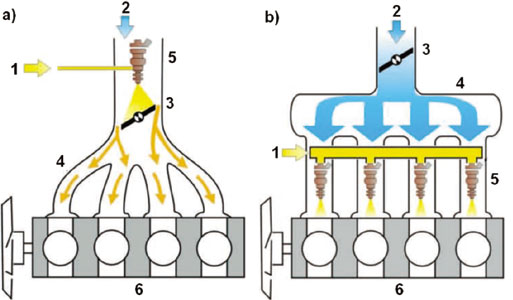 Single a) and Multi-point b) injection system layout

So far then, we have mixed fuel and air that has been compressed. But, in order to get the best possible performance and efficiency out of an engine, the individual cylinder contributions must be as even as possible, with as little variation between individual cylinders.

Even small variations have a dramatic effect on the overall engine performance, so even mixture distribution is key to this, and impossible to achieve fully with a centralised mixture preparation system (like a single carburettor shared between cylinders).

The distance that the mixture travels in order to get to the cylinder has an effect, that is the possibility that the fuel and air may separate during transit – the fuel literally drops out of the moving air, becoming liquid droplets again (instead of a finely atomised spray). This is known as ‘wetting’, and causes flat spots due to instantaneous weak mixtures being introduced to the cylinder.

This effect is much worse at low temperature – hence the need for the choke when using a carburettor, to enrich the mixture when cold – during transient operation where the air accelerates faster than the fuel – an accelerator pump is used to richen the mixture during acceleration. These were some of the arguments for the move to port fuel injection to each cylinder, contributing to improving efficiency and reducing emissions.

Moving back to combustion, once the fuel and air is mixed and compressed, we are now ready to produce some work. In a gasoline engine an electrical spark or arc is used to start combustion. We mentioned before that the mixture temperature is raised, but not beyond its ignition point. The intense electrical arc produced by the spark plug at its electrodes creates a localised heating of the mixture, sufficient for the fuel elements to begin oxidising, and combustion of the mixture starts with a concentric flame front growing outwards from the initial ignition kernel.

Once this process is initiated, it perpetuates itself, so there is more or less no control over it. We just have to hope that the mixture is prepared correctly to sustain this flame so that it consumes all of the mixture, burning it cleanly and completely. The technical term for this type of combustion is ‘pre-mixed’; the engine is ‘throttled’ to control the mass of mixture in the cylinder, and hence its power output. The ‘throttle’ is a general technical feature of the gasoline engine. 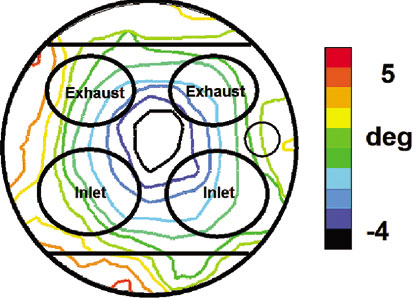 An important point to note is that the speed that this flame travels across the combustion chamber is crucial. For example, the speed of a flame, travelling through a typical, hydrocarbon air/fuel mixture, would be far too slow inside a combustion engine (approximately 0.5 metres per second). So, we have to speed things up!

The way this is achieved is via cylinder charge motion, or turbulence. The turbulence is generated via induction and compression processes, in conjunction with the combustion chamber design, and has the effect of breaking

up the flame front, increasing its surface area available for the oxidation process. Assuming a normal combustion event, the flame front grows out to the periphery of the cylinder, where it then decays once all the mixture is consumed. 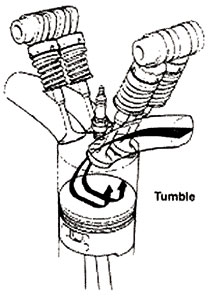 Get the timing right

Of course, the timing of this ignition event is essential. Ideally, we want the cylinder pressure, forcing down on the piston, to occur at the correct time relative to the crank angle. This seems obvious but if this occurs: a) too soon, then we may be trying to push against the rising piston; or b) too late, and the piston is already moving down the bore, hence the expansion of the gas won’t do any work and the energy will be wasted as excessive heat in the exhaust.

A simple analogy would be to imagine pushing someone on a swing – too soon and the effect is collision, but too late and the effect is no force transmitted – it’s the same in the engine cylinder. What engine engineers do know, is that half of the total fuel energy should be released at around 8˚ after TDC. This can be measured by cylinder pressure analysis during an engine test. Hence, with a new engine design, the appropriate ignition timing can be mapped via monitoring the cylinder pressure for energy release, as well as watching out for the knock limit.

* The fuel/air mixture is prepared externally, and ignited via a timed spark.
* The engine power is controlled via throttling, which reduces efficiency, particularly at part-load.
* The compression ratio is limited by self-ignition of the fuel/air mixture.
* In operation, engine maximum torque is limited by abnormal combustion (knocking).
* Cylinder to cylinder variation (due to fuel distribution problems, and other factors) reduces the efficiency of the engine and is significant in a spark ignition engine.