This month, REPXPERT Alistair Mason replaced the timing belt on a 2015 Peugeot 2008 fitted with a 1.2 VVT 3-cylinder petrol engine.

The oil pressure warning light was activated at the relatively low mileage of 52,000 miles. Upon further inspection, the reference fault code P15A8 was traced to a blocked oil strainer, which was found to contain small fibrous particles that had come from the timing belt.

This engine is fitted with a timing belt that runs totally immersed in oil, called a ‘belt in oil’ or ‘wet belt’. A quick visual inspection of its condition can be carried out through the oil filler cap, in order to confirm it is the likely cause of the blocked oil strainer and subsequent fault code.

The following workshop equipment is required for the replacement: Remove the engine cover and turbo inlet pipe (Fig 2), first disconnecting the engine breather and vacuum pipe, followed by the engine breather pipe and turbo to intercooler pipe, being careful to unclip the solenoid attached. Disconnect the sensor and take off the intercooler to inlet manifold pipe, the air intake to air filter assembly, the top section of air filter unit, the multi plugs from the coils and injectors, the coils, high pressure fuel pump and metal fuel pipe. Also disconnect the turbo vacuum solenoid and bracket at the rear of the cam cover, and then the multi plugs from the two cam position sensors. Remove the vacuum pump on the side of the cam cover and the two-engine cover/air filter fixings (Fig 3), followed by the top cam cover assembly (Fig 4). 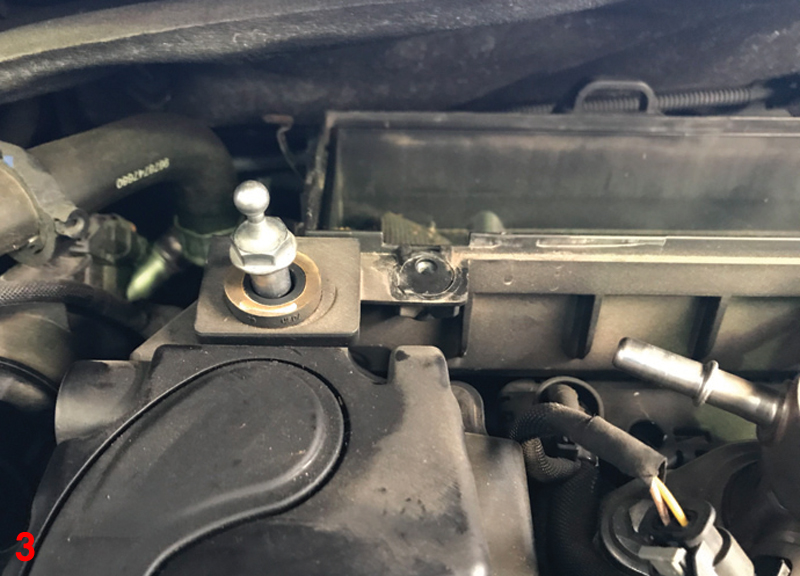 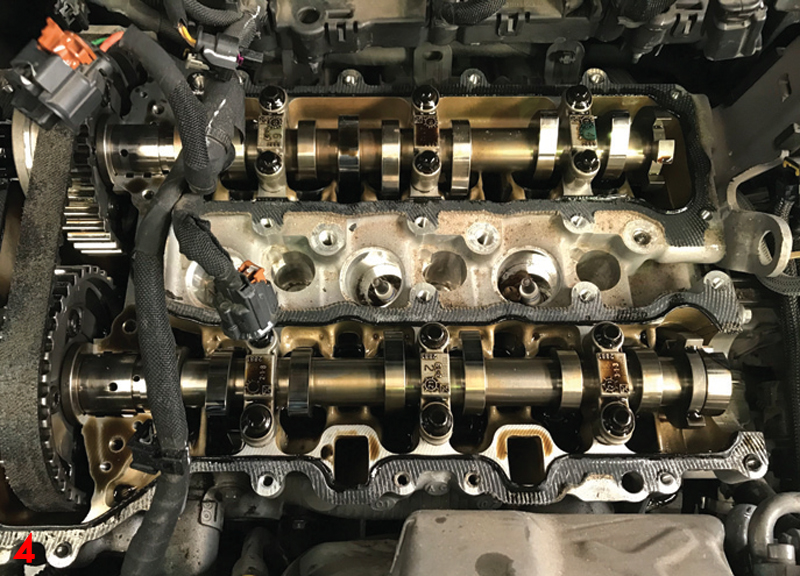 Raise the vehicle lift to gain access to the bottom pulley, remove the auxiliary drive belt by turning the tensioner in a clockwise direction, and inspect the belt for any wear, replacing it if required. Remove the six bottom pulley bolts and then the pulley, which will allow the stretch belt to the water pump to be inspected and replaced if necessary.

Lock the engine with the engine timing locking tools. Using the crankshaft pulley bolt, rotate the engine in a clockwise direction until the flat surfaces of the camshafts are at the 12 o’clock position (Fig 5). Slide the crankshaft locking tool through the lower bell housing and into the location point in the back of the flywheel (Fig 6), then lower the vehicle lift and fit the camshaft locking plate to the camshafts (Fig 7). 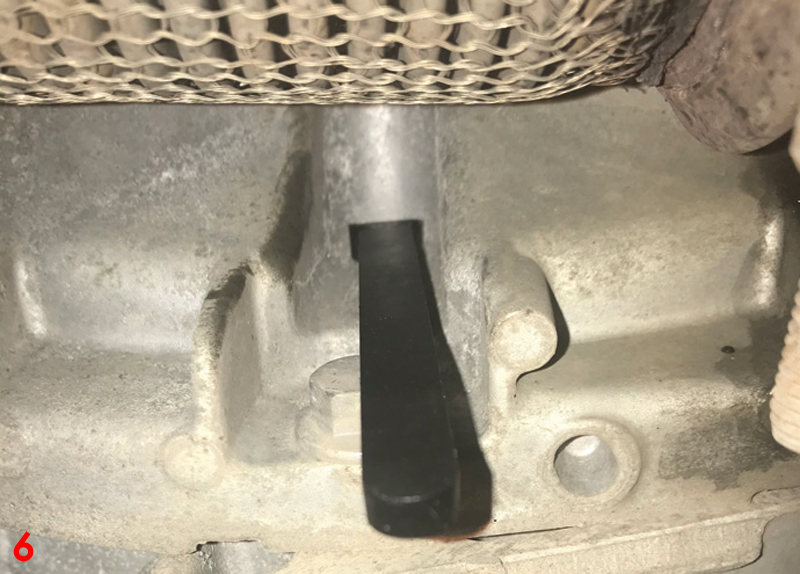 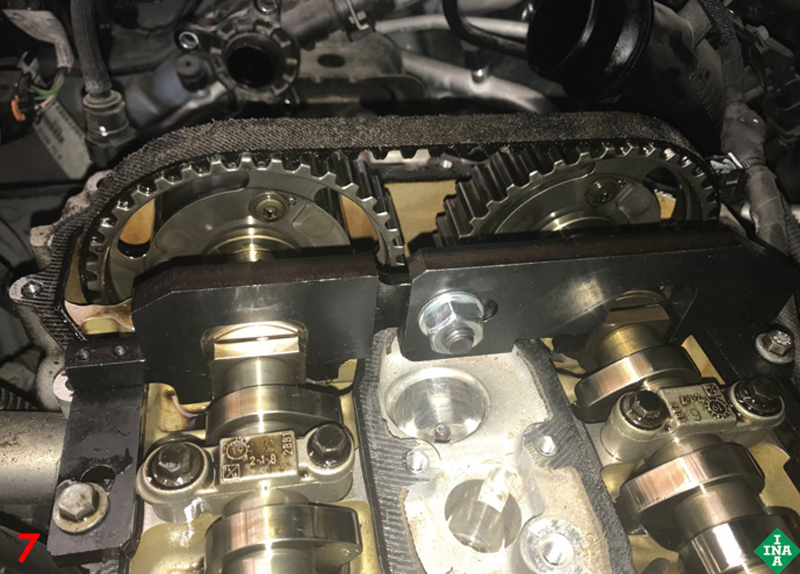 Whilst this repair was carried out, the sump was removed and the oil strainer checked (Fig 9) and cleaned, along with the vacuum pump and variable valve timing units. Finally, the engine oil and filter were replaced. Note: The timing belt replacement interval for this engine has now been lowered to reduce the risk of this problem. 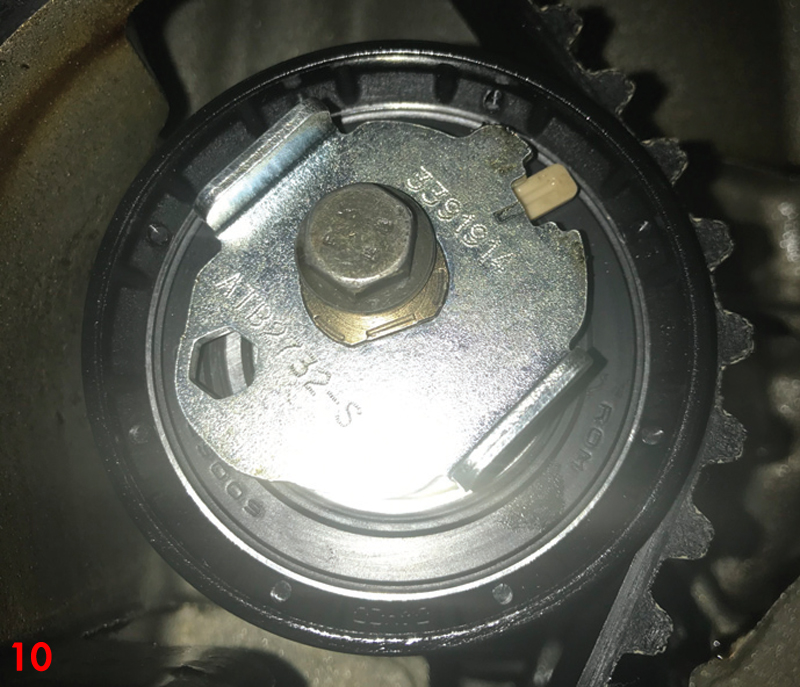 Refit all items in reverse order of removal, but when fitting the bottom pulley, locate the water pump belt on both pulleys. Using a longer bottom pulley bolt, start to bolt the pulley into position. When close, twist the pulley into the final position and secure with a second bolt. Once secured correctly, replace the longer bolt with the original.

Information on Schaeffler products, fitting instructions, repair times and much more can be found on the REPXPERT garage portal or the new REPXPERT APP.
Tags:Belt ClinicRepxpertSchaeffler