Either way, this scenario is a lot more common than you might imagine – every year, at least 150,000 drivers put the wrong fuel in their car (according to statistics from the AA, 2012). That’s about one every 3 ½ minutes, every hour, every day!

If you get the opportunity to do so (before it’s too late), you should advise the customer NOT to turn on the ignition or start the engine, as this will circulate the contaminated fuel and increase the risk of expensive damage to the engine. Many cars have a low-pressure pump located in the fuel pump, which is activated as soon as the ignition is switched on. The general ‘rule of thumb’ therefore is that if any more than 5ltrs of the wrong fuel has been administered then you should stop and drain the tank! 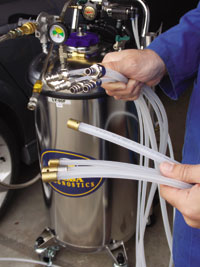 Misfuelling is more commonly associated with putting petrol into diesel vehicles by mistake. This is mainly due to the growing popularity of diesels as well as the fact that petrol pump nozzles are smaller than their diesel counterpart, allowing for an easy mistake to be made by the unwary car driver or if someone’s attention is distracted.

Diesel fuel pumps have very fine tolerances and are lubricated by the fuel itself. Petrol in diesel acts as a solvent, which reduces the lubrication and can subsequently cause serious damage due to the metal-to-metal contact within the pump. If allowed to continue, tiny metal particles can find their way into the fuel which can then cause further damage to the rest of the fuel system, including the injectors.

Common rail and HDi engines are particularly vulnerable to damage and if fuel containing pump debris gets as far as the common rail system, it may end up being necessary to replace virtually the complete fuel system, and could actually be cheaper to replace the entire engine in the long run!

Help is at hand
Alba Diagnostics has been at the forefront of developing solutions for the independent garage to deal with misfuelling incidents, both effectively and safely, thus minimising the risk of expensive engine damage. The company has two models of fuel drainer available (at 40ltrs and 90ltrs capacity) and both are Sira certficated as being ‘explosion proof’ for use with fuels and vapours. To support this, the certificate is prominently fitted to the units – an essential requirement for insurance purposes!

2. For safety, attach the earth wires to minimise risk of sparks. The fuel drainer itself is operated by an air venturi system.

3. Select the appropriate fuel extraction hose and connect to the fuel drainer.

4. Insert the fuel suction hose into the fuel tank.

5. Before operation, make sure you check all safety valves.

6. Open the valve and begin fuel draining. When the tank is empty, close the valves and remove the suction hose.

7. If it is also necessary (or desirable) to remove fuel via the fuel lines or fuel rail, a range of specialist fuel system adaptors are provided to enable this to be accomplished. 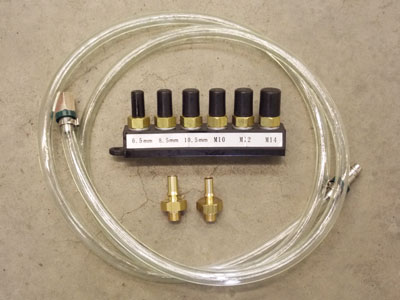