In this month’s Clutch Clinic, Charles Figgins, Technical Marketing Manager at Blue Print, presents a step-by-step guide to replacing the clutch on a 2008 Audi A4 Avant B7 2.0 TDi.

Traditionally, vehicle manufacturers have configured their engine and transmissions within the chassis by mounting them transversely for front-wheel drive and longitudinally for rear-wheel drive cars.

However, for many years and for many of its models, Audi has opted to fit its engines and transmissions longitudinally using a front-wheel-drive transaxle. This arrangement is also used in the four-wheel drive ‘Quattro’ variants, which feature in most model ranges.

The model featured in this article is a 2008 A4 Avant B7 2.0 TDi fitted with a 01X front-wheel drive six-speed transmission. It was reported that the vehicle had clutch judder – when cold – and a rattling noise coming from the transmission area. This required the transmission to be removed and the clutch and flywheel to be inspected in order to fully diagnose the fault and rectify it.

Once the vehicle was brought into the workshop, the bonnet was opened, and the engine cover was removed. After checking that the ignition was switched off, the battery was then disconnected.

Pro tip: Whilst working in the plenum chamber, where the battery and fuse box are located, it is advisable to check the water drain outlet. On this model, it is very common for the outlet to be blocked up with tree debris. If blocked, the battery area fills up with water which can lead to many electrical issues!

The vehicle was then raised up to a working height in order to gain access to all other items that required removal from under the vehicle. Then, the engine and transmission under trays were removed, along with the under tray retaining bracket (note: this saves it from being damaged when the transmission is removed).

All but two of the bell housing bolts (including the two that retain the starter motor) were located, undone and secured as necessary. At this point, it was important to make a note of where each bolt came from because the bolts vary in size and length.

Pro tip: Be advised that the engine and transmission used in this application are used in many other configurations within the VAG range. This means many spare mounting holes are not used.

The heatshield (above the right-hand driveshaft) was then removed. Following this, the original position of each driveshaft was marked before all of the bolts that retain them to the drive flanges were undone. After marking, they were positioned to one side (Fig 1a and 1b). 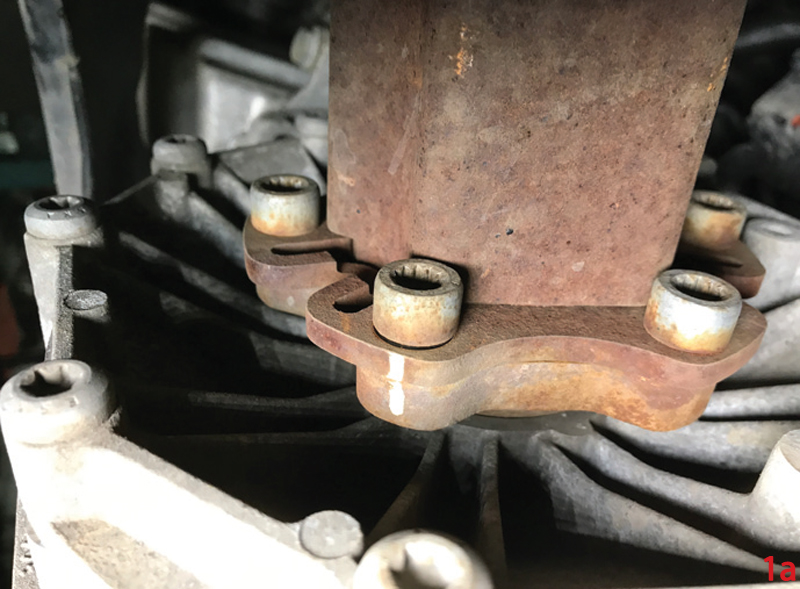 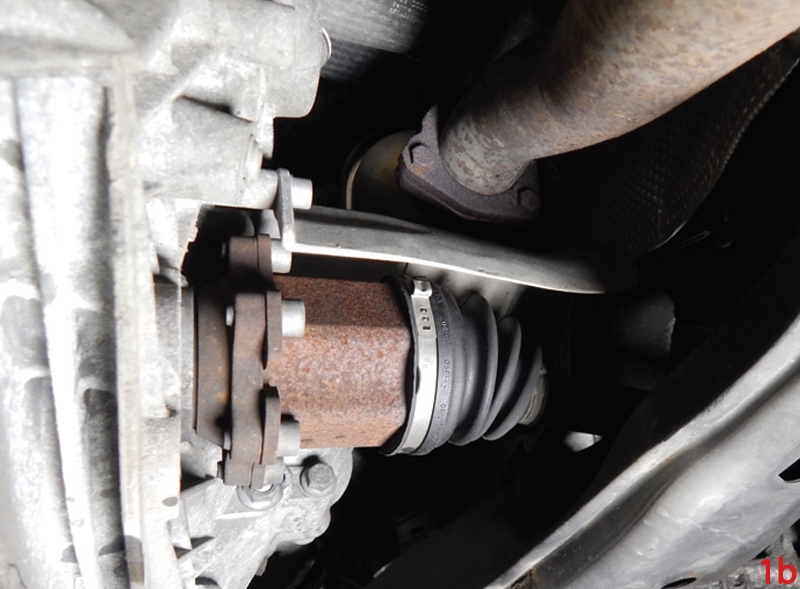 On the right-hand side of the transmission the reverse lamp switch was located. The wiring loom was unclipped and then secured. Above this switch was one end of the gear selector rod. The retaining bolt was removed and put to one side (Fig 2). 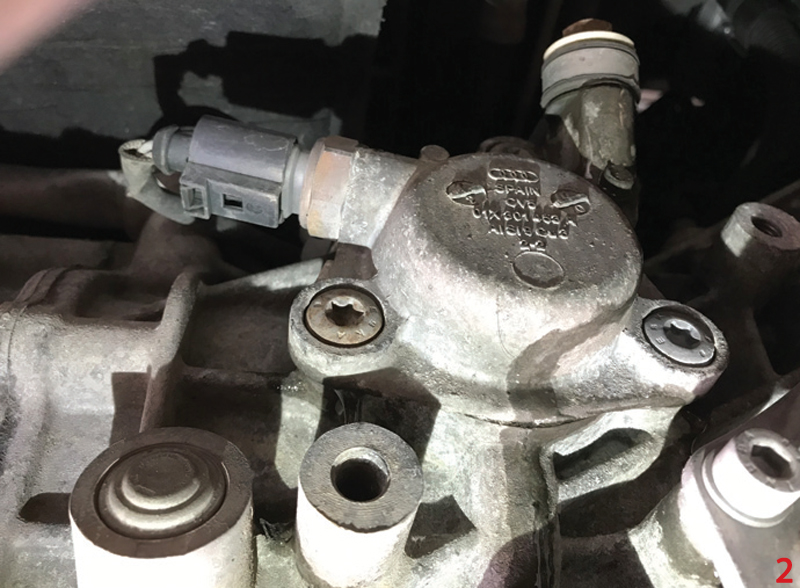 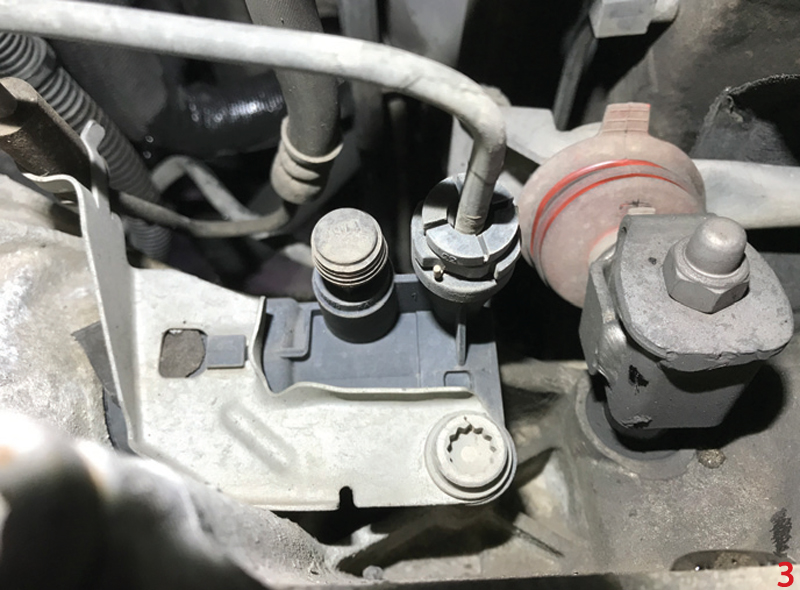 Pro tip: This can be achieved by lowering the exhaust – either by unbolting it from the manifold or by removing the exhaust hanger (located in the middle of the exhaust), in order to give enough room between the exhaust and the floor of the car (Fig 4). 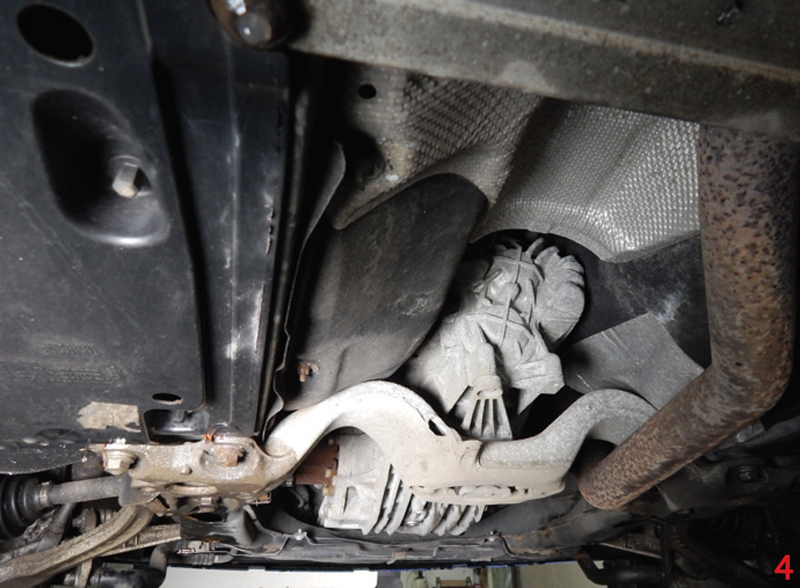 With the transmission slightly lowered, the gear selector steady bar was unfastened. Then, before attempting the removal of the transmission, it was important to check that all retaining bolts were removed and that all electrical cables and pipes were free. With everything checked and clear, the transmission was removed away from the vehicle.

With the transmission removed, the flywheel was locked in place to stop the engine from turning. The original self-adjusting clutch and dual-mass flywheel were unbolted and removed for inspection after 225,000 km (140,000 miles) of use. First, the flywheel was checked, where some bluing on the friction surface was discovered. This was due to the excess heat created by the worn clutch. As a result, a rock test was also carried out on the flywheel, however it subsequently failed the 2.9mm limit.

Turning our attention to the release mechanism, the release bearing was removed from the clutch release lever; this had become dry and noisy with usage and age.

After inspecting all of the parts of the clutch mechanism, the conclusion was that the clutch kit and flywheel were in need of replacement. Blue Print’s SMARTFIT Solution Clutch Kit, ADV1830146, was selected to replace the original self-adjusting clutch.

The advantage with this kit is that it has no sensitive adjustment mechanism, which means it doesn’t require any initial set-up with a special tool. The SMARTFIT solution kit also replaces both possible clutch kits that could have been originally fitted to this vehicle, making it easier for the workshop.

Before fitting any new components, all mating surfaces at the rear of the engine and the transmission bell housing were cleaned in order to be free of all grease, dirt and old friction fibres from the previous clutch. The new dual-mass flywheel, ADV183508, and retaining bolts, ADV183315, were fitted to the engine along with the new clutch. All of the bolts were then tightened to the manufacturer’s recommended tightening figures, evenly and in sequence, before all components were secured and correctly aligned (Fig 5). 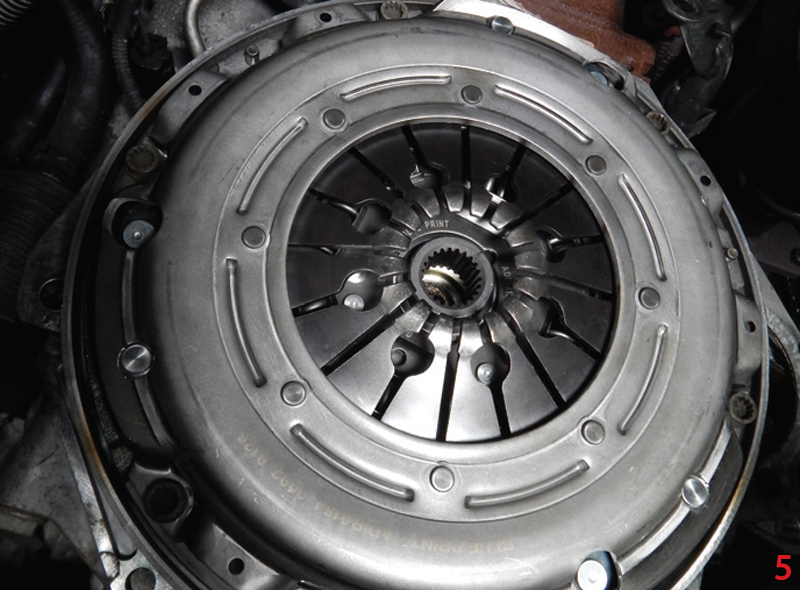 Before refitting the transmission to the engine, the new release bearing was assembled with the release lever and then fitted with pre-greased pivot points to ease operation (Fig 6).

All of the other parts that were removed in the process (during removal of the transmission) were refitted, and all of the bolts and fixings were tightened accordingly. The vehicle was then carefully lowered, and the battery reconnected. Following this, the brake/clutch fluid reservoir was topped-up with fresh fluid, the slave cylinder was bled of any excess air, and the clock and one-touch window operation were reset. Finally, a road test was carried out to check the clutch operation, which proved that the clutch fault had been fixed.

To find out more about the Blue Print range, click here.
Tags:Blue PrintClutches