The Dayco technical team runs through the procedure for installing the Dayco kit KTB819 on a Škoda Octavia.

On its launch in 2013, the 1.4L TSI (CHPA) that powered the mark III Octavia was the largest petrol engine in the Octavia range. The powerplant is used across several VAG models, so is likely to be familiar to workshops throughout the country.

As replacing the timing belt requires the removal of the auxiliary belt, Dayco recommends that in addition to replacing all the primary system components, technicians should check, and if necessary, change the auxiliary components at the same time.

This step-by-step technical guide will help technicians through the process, avoiding complications and ensuring a first-rate outcome. As with all primary drive system jobs, always check the timing marks beforeremoving the timing belt and ensure the work is undertaken when the engine is cold – ideally, the vehicle will not have been run for at least four hours.

Start by removing the plastic guard from underneath the engine and then, after taking off the front offside wheel, the lower part of the plastic cowling from inside the wheel arch. This will reveal the auxiliary belt system and by relaxing the tension on the belt with a spanner on the tensioner, the belt can be removed. Before disconnecting the tensioner, lock it by inserting a pin as shown (Fig 1). 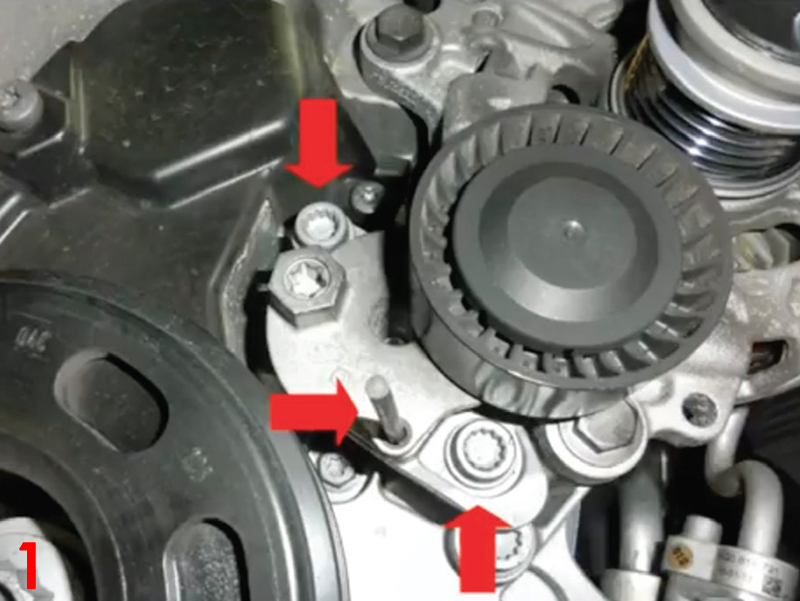 Now, remove the water pump belt cover and the cover on the gearbox side of the intake camshaft, drain the cooling system and take off the upper cover of the water pump and the expansion tank, as the pump and belt should be changed at the same time.

Detach the upper timing belt cover, which will expose the variable exhaust valve timing unit on the left and intake on the right, and then rotate the central crankshaft pulley screw clockwise and position the intake camshaft as viewed from the gearbox side (Fig 2). 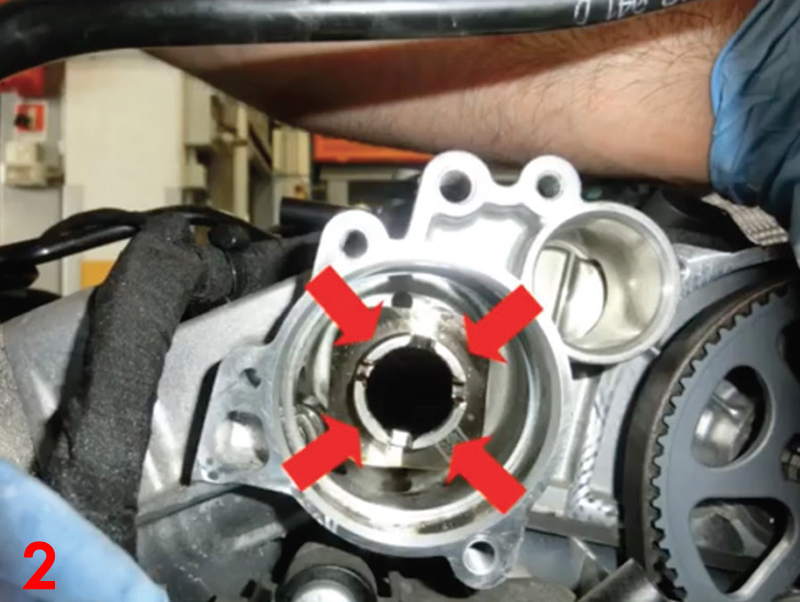 After disconnecting the ignition coil and removing the spark plugs, insert a screwdriver, which is long enough to touch the top of the number one piston at BDC, and rotate the crankshaft to its TDC (the screwdriver will rise by 35mm).

Insert, and fully screw the crankshaft timing tool (T10340) into place and rotate the crankshaft until the shaft rests on the tool. Then fit the camshaft tool (T10494) and after making sure it is in the correct position, lock it with a screw. 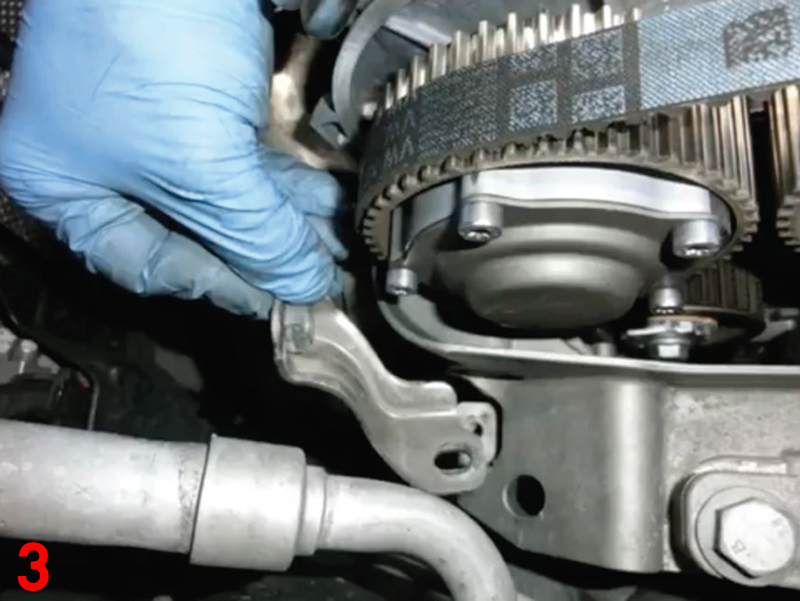 Attach the new idler, Dayco ATB2637, and torque to 45Nm, and tensioner, Dayco ATB2636, ensuring it is fitted as shown (Fig 4), and then fit the valve timing units on the corresponding camshafts, but do not fully tighten their screws. 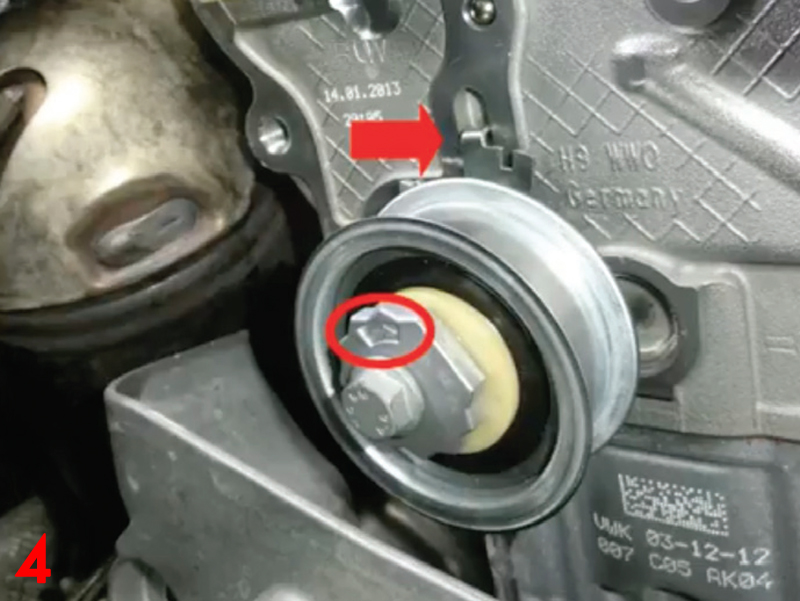 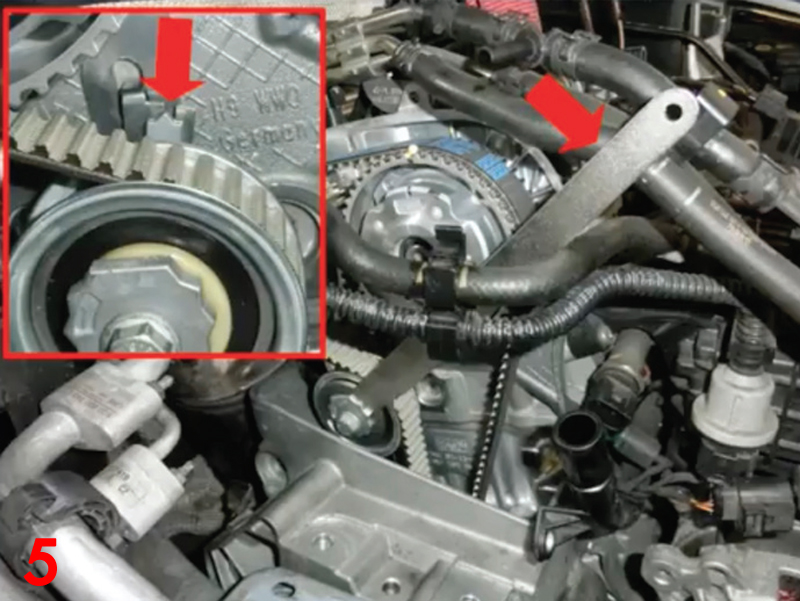 It is extremely important to follow the correct tightening procedure when reattaching the water pump cover, so first tighten the screws to 10Nm in the sequence shown (Fig 6) and then loosen by one turn. Put a hex screw in ‘A’, torque to 30Nm and hold the torque wrench in position while retightening screws 2, 1 and 5 to 10Nm and then 3, 4, 5, 1 and 2 to 12Nm. 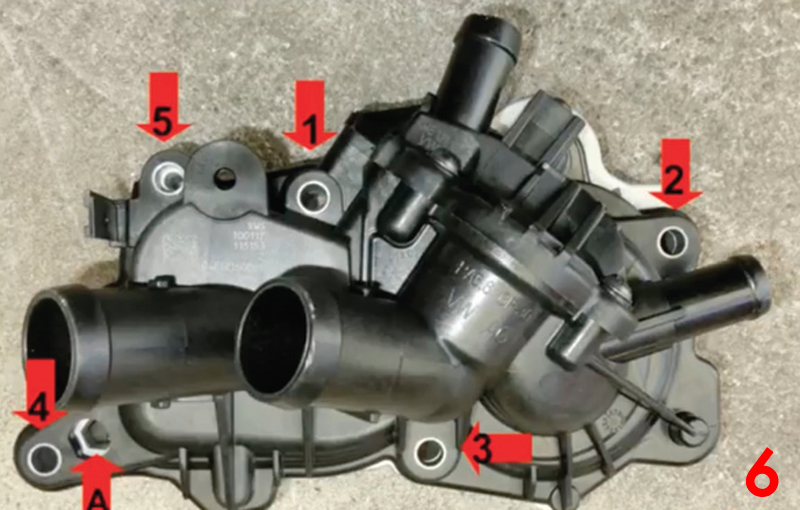 Refit the components in reverse order of their removal, tension the crankshaft pulley screw to 150Nm + 180° and the crankshaft timing tool cap to 30Nm. The replacement of the auxiliary tensioner (APV3270) and belt (6PKI000) is also recommended.

Finally, refill the cooling system, start the engine and check for leaks and ensure the radiator fan is operating correctly. Once the engine is cold, check the level of the fluid.

To find out more about the Dayco range, click here.
Tags:Belt ClinicDaycoStep-by-Step

0 0 0
Previous : ABS Sensor Kit
Next : Autodata looks at an engine fault on a Toyota Verso