The last few years have seen the introduction of Stop-Start systems by many manufacturers across various vehicle models to improve fuel consumption and reduce exhaust emissions.
One of the main problems the introduction of Stop-Start systems has caused is that when the starter is operated the voltage in the vehicle’s electrical system can drop. In normal circumstances this is not a problem, the vehicle is not usually in “driving mode” and it doesn’t matter if some of the vehicle electrical systems do not function during starter motor operation (exterior lights, heating & air conditioning and audio systems, for example). However, during driving this is not acceptable for reasons of safety and driver convenience.
To counter this problem most systems use an additional power supply to ensure that voltage-critical equipment will not stop operating during starter motor operation. For some models this consists of a large capacitor that is charged by the alternator using engine power, or kinetic energy generated during deceleration and braking.

Considerable thought has been given to the safety mechanisms; most, if not all, Stop-Start systems will not operate if any of the doors or the bonnet is open and will only operate if sufficient vacuum is available to ensure the normal operation of the braking system.
As the use of Stop-Start technology is increasingly adopted, there are now as many systems as there are manufacturers, but they can be categorised as follows:

Although some models use a conventional starter motor for cold start and Stop-Start operation, it is usually modified to ensure it can withstand the extra use it will encounter. However, the time taken to start the engine with this system is thought by some to be too long so other models are using a different approach.
Battery technology is also changing, with the extra starting cycles requiring a more robust battery construction. Absorbent glass matt (AGM) batteries, Gel batteries or the slightly cheaper enhanced flooded batteries (EFB) variants can be found in most vehicles with Stop-Start systems. Replacement of these batteries may necessitate programming of the vehicle’s computer system to allow the battery degradation process to be monitored. On many models the Stop-Start system will be disabled for up to 24 hours following battery disconnection or replacement to allow the battery condition to be evaluated.

WHICH STOP-START APPLICATION DO THEY USE?
Toyota Yaris
The Stop-Start system of the Toyota Yaris has its starter motor in constant engagement with the flywheel ring gear and then the ring gear is connected to the engine flywheel with a one way clutch. This, together with recognition of the engine’s static crankshaft position, allows instantaneous ignition of the correct cylinder, thereby reducing starting time.
It is interesting to note that the number of starter motor operations is recorded and the calculated “end of starter lifespan” is indicated by a flashing warning lamp on the instrument panel. After replacement of the starter motor the counter has to be reset.
PSA group
Using a conventional type of starter motor for cold start, the Peugeot/Citroen group employs a combined starter motor and alternator assembly (so called reversible alternator) for the Stop-Start system. Connected to the engine crankshaft with the auxiliary drive belt, it provides silent operation and short starting time.
Unlike conventional alternators, diodes are not used; instead voltage rectification and motor operation use metal–oxide–semiconductor field-effect transistors (MOSFETs). Presently, it would appear that it is only the “e-HDi” models that use the aforementioned capacitor.

The system is designed to work in 5 phases:
1. The vehicle is switched on and the ECU will crank/start the engine. This is achieved by the battery providing electrical energy and the reversible alternator then acts as a starter motor to help crank the engine.

2. During normal driving (when the vehicle is not being slowed down) the reversible alternator then acts as a conventional alternator by converting the mechanical energy into electrical energy and charging the battery.

3. Once the vehicle speed has been reduced below 5mph by braking the StARS ECU gives a command to stop the engine. 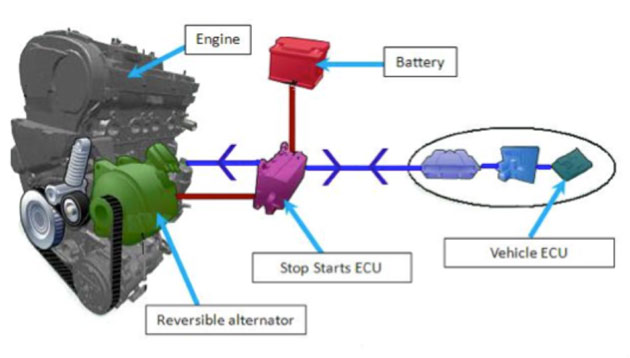 4. Once the brake pedal has been released the StARS ECU then gives a command to start the engine again. The battery provides electrical energy and the reversible alternator plays the part of the starter motor and cranks the engine. 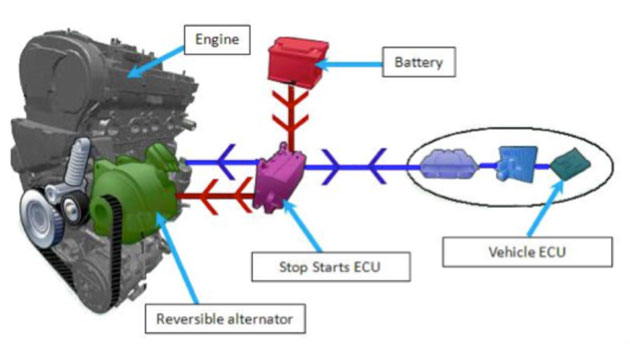 5. The vehicle is switched off and the ECU will stop the engine 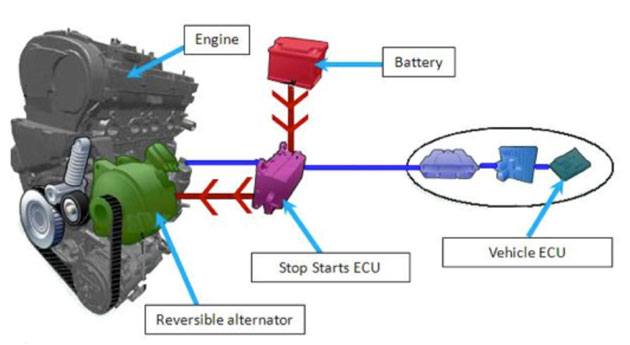 SERVICING DATA
AUTODATA has enhanced its online product offering to include technical information on vehicles with Stop-Start technology.
The technical information provided by Autodata on its online system enables technicians to identify the specific location of key elements such as the main battery, additional battery and the Stop-Start capacitor.
Procedures for disconnecting and reconnecting each element are clearly explained along with additional information for servicing the system. 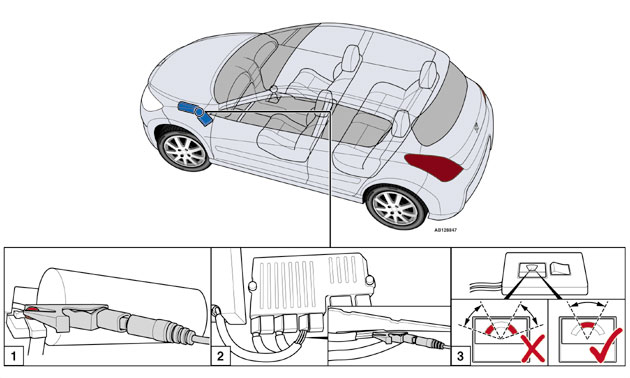 REPLACEMENT BATTERIES
EXIDE has expanded its coverage of the UK car parc with new AGM and ECM batteries. The new products cover vehicles from VW, Audi, Toyota, Ford and a slew of other brands. 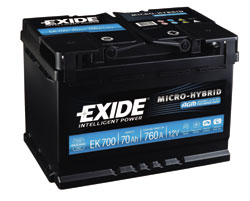 Exide’s AGM batteries are claimed to have around three times the lifecycle durability of standard batteries. Parts of “matching quality”, they are designed for cars with Start-Stop and regenerative braking systems. They are also used in standard vehicles to increase endurance and performance.