With claims that it’s new Premium battery will recharge up to 1.5 times faster, Exide looks at how the use of Carbon Boost technology offers the key to such gains. 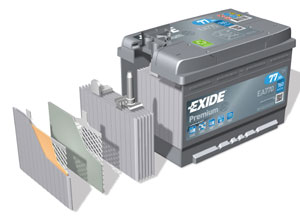 Carbon Boost was first developed for Exide’s Start-Stop AGM and EFB batteries, based on years of intense research and experimentation. The unique carbon additives lead to improved charge acceptance and a significant reduction in charging times.

Since then the battery giant has continued to make ambitious investments in the technology, leading to its application in conventional batteries for the very first time.

The Carbon Boost effect
Standard batteries can generally suffer from a build-up of sulphate particles on their negative plates during discharge. This nonconductive layer inhibits recharging, since much of the energy goes into dissolving the sulphate on the plates.
Exide discovered that including certain carbon additives vastly improves the surface area and thus the conductivity. This effect causes the sulphate particles to dissolve more quickly, leading to significantly better charging performance.

Premium Carbon Boost batteries are designed for top-of-the-line vehicles with powerful conventional engines and demanding electrical equipment. They are also ideal for the frequent stops and short journeys typical of urban driving, and for use in extreme temperatures.

The new product is claimed to provide 30% more starting power and will provide comprehensive model coverage of the European car parc. The product benefits from Exide’s OE experience, and meets the strict requirements of carmakers.

BATTERY FAILURE IS THE #1 CAUSE OF CAR BREAKDOWNS
This is often the result of the battery being insufficiently charged. Carbon Boost allows the battery to reach a healthy state of charge much faster, leading to significant improvements in performance and reliability. 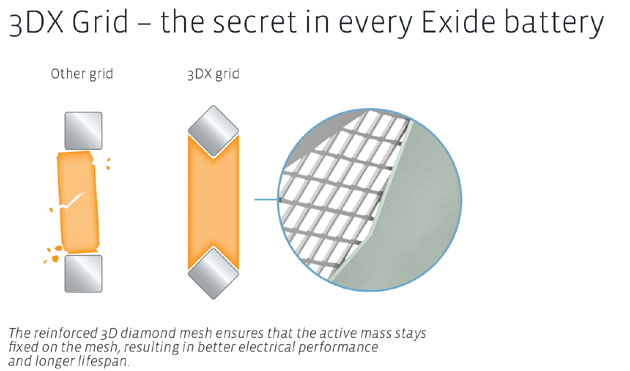 WHAT CAN DRAIN A BATTERY?
Cold weather significantly impairs battery performance. But it is during the cold season that more energy is needed for light and heating.
Hot weather accelerates self-discharge, grid corrosion and active material shedding. It could lead to shorter service life if batteries are not reinforced for extreme climates.
In urban environments the engine is often turned off/idle, and the electrical system may consume more power than the alternator can supply. This puts extra pressure on the battery.
Power-hungry electrical equipment, such as media players or navigation units, put additional extra pressure on the battery.