In this case study, Pico technician Steve Smith describes the diagnostic techniques involved when faced with a misfire symptom during cold starts in engines that utilise TwinAir technology.

The customer reported a severe vibration from the engine when starting from cold. The vibration was accompanied by a fuel smell from the exhaust and the engine MIL illuminated in the instrument panel.

Free revving the engine would allow the engine to run smoothly and on return to idle the misfire had improved. At this stage, it is worth mentioning that the vehicle in question was a two-cylinder design, and so losing one cylinder had a detrimental effect on engine vibration and performance levels.

With the customer’s complaint verified, we confirmed the vehicle’s ID and specification. Confirmation of vehicle specification is of the utmost importance when it comes to diagnosis, as there is often a temptation for customers to modify their car with fashionable accessories that lack the fundamental quality control and engineering that was intended for the vehicle. The customer confirmed that no such accessories had been installed.

To establish facts from fiction, the customer interview follows the four ‘targeted’ open question principle below:

Further quizzing of the customer revealed that the previous oil change was carried out three years ago given they only drive around 3,000 miles per year.

Based on the answers, I was already thinking that this was a mechanical fault, but I did not want to assume anything!

A vehicle scan of all on-board control units revealed several fault codes, as listed below:

To summarise the vehicle scan, cylinder 1 misfire codes appear to be the order of the day.

Before we dive in, it is important to take a step back and check for technical bulletins (recalls, campaigns, etc.). There are numerous ‘known faults’ listed for the operation of the variable valve lift control system (the TwinAir actuator), which predominately focus on the hydraulic functionality.

It’s not often you obtain fault codes, symptoms and ‘known faults’ that all point to a single component. Of course, it would be tempting to replace the TwinAir actuator along with the engine oil/filter and hope for the best, but why do that when we have the means to prove all of the above before we start replacing parts? Replacing a TwinAir actuator assembly means committing to an expensive component (at least £750) that may or may not be faulty. Remember, we have a misfire from cold; this could also be an ignition coil or spark plug failure.

Note: After the initial 10 seconds of the engine running from cold, the fault would clear and the vehicle had to fully cool again. This is where eight channels can speed up the diagnostic process, given the nature of such a symptom.

In Fig 1, we have the initial cold start of our Fiat 500 as we monitor the following signals: 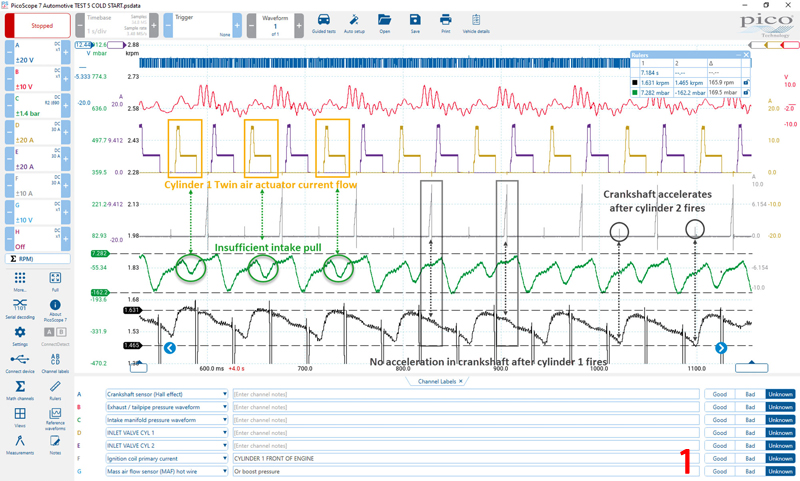 We could immediately see a number of areas of concern and eliminate several other variables.

Fig 2 illustrates how this engine would eventually run normally on both cylinders once it was warm. Note: Channel G has been changed to measure the primary current on the ignition coil on cylinder 2. 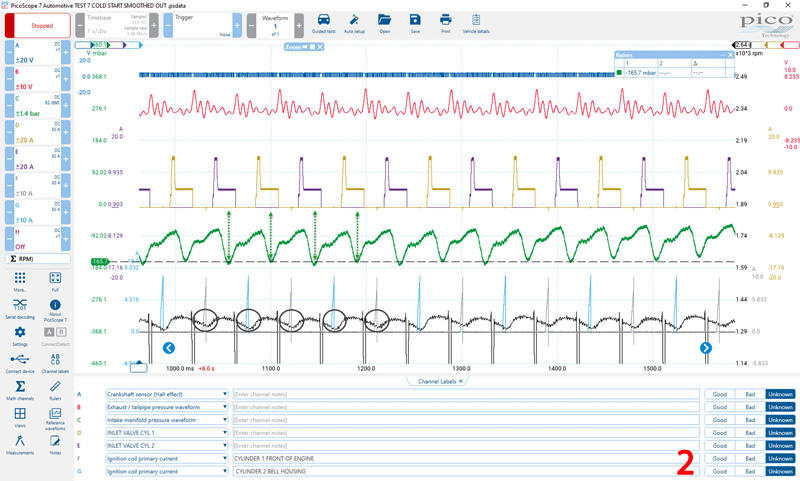 So, let’s evaluate what we had confirmed and how we were to proceed:

Based on the evaluation above, I made an assumption that measuring the secondary ignition would not reveal anything about the reduced intake pull for cylinder 1 (our prime suspect), so adding a pressure transducer to cylinder 1 during cold start seemed to be the best course of action.

The results (Fig 3) were exactly what I was hoping to capture: 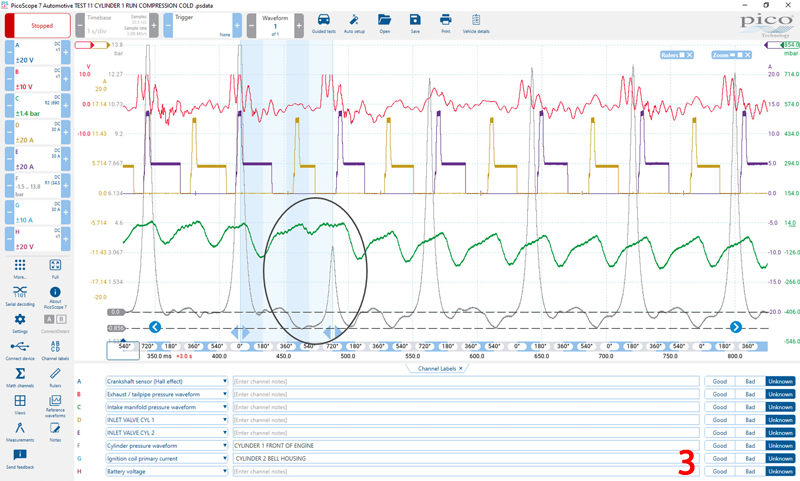 The momentary failure of the inlet valve to fully open resulted in a low compression, a reduced intake pull (within the intake manifold), and of course, low compression/misfire.

A closer examination of the four-stroke cycle during the fault condition, revealed the dramatic effect the reduced air intake (intake pull) during the short inlet valve duration had on the peak compression (Fig 4). Note the increased depth and prolonged intake pocket associated with a restricted intake. 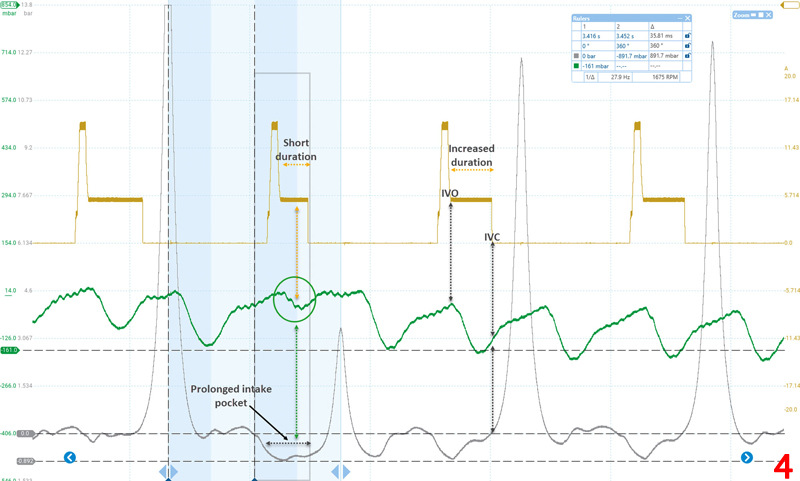 The inlet valve duration (Fig 5) was immediately increased on the following intake stroke in an attempt to stabilise the compression. The effect on the intake pocket qualifies that the inlet valve has truly opened during the subsequent intake stroke. 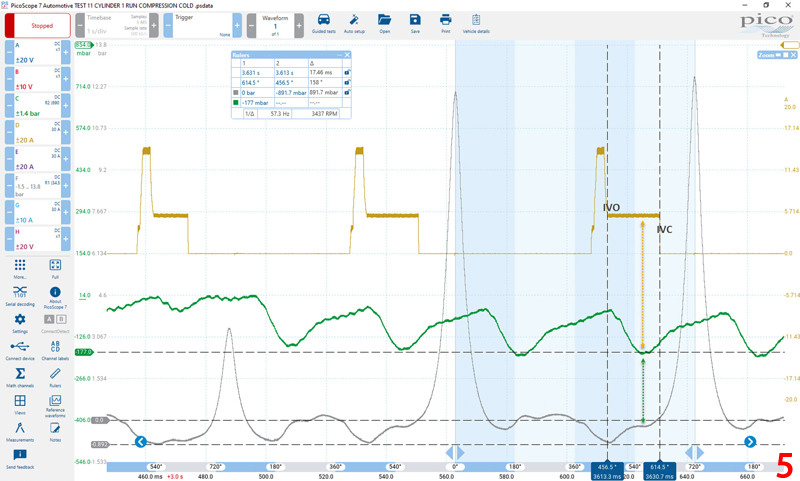 Looking at the waveforms above, it does amaze me how Fiat has been able to infinitely manipulate the four-stroke cycle to achieve superior economy and emissions across the entire engine speed and load range.

Let’s look closer at the IVO event. Traditionally, this valve is opened around 355° ATDC compression to promote internal scavenging and EGR (temperature permitting). However, the IVO event on the Fiat occurred at 456° ATDC compression (midway through the intake stroke 360°-540°) and closes at 614° ATDC compression, which is 74° into the following compression stroke. This reduces the pumping losses while still achieving a peak pressure of 12.6bar in just 106° of crankshaft rotation.

So, based on all the measurements above, had we done enough to prove that our intake valve was not fully opening under certain operating conditions? I think we had established the cause of the misfire but not why. We knew that the inlet valve actuator consumed current when the fault occurred, so we had to assume the ‘work done’ status via the actuator and the PCM/driver. The question, therefore, is what else could cause the inlet valve not to open when commanded by the PCM?

Given this summary of possible causes, and our customer’s comment surrounding a low oil level warning (which may have been an oil pressure warning), the only logical step was to measure the oil pressure with the WPS500X using our Sykes Pickavant adapters.

Once we knew that our oil pressure was correct, we would be left with a faulty inlet valve actuator assembly or a sticking inlet valve.

Fig 6 shows the oil pressure values during an initial cold start followed by a static warm-up cycle from 13 to 63°C (cylinder head temperature). Note the instantaneous rise of the oil pressure in response to WOT applications. 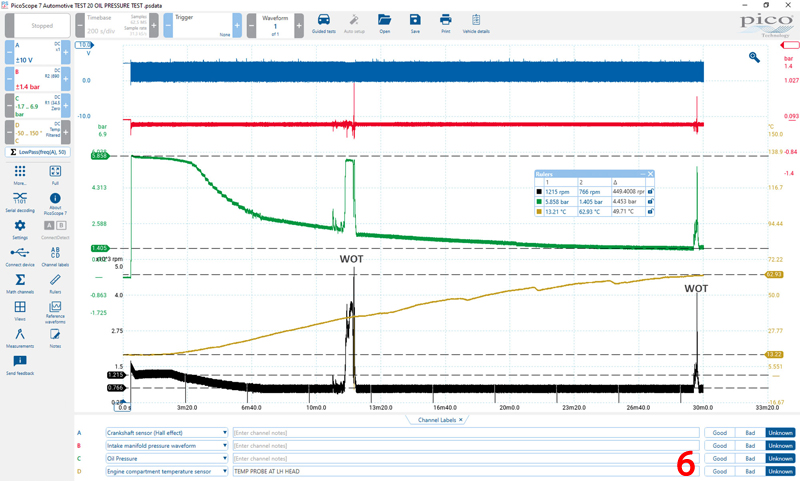 The values obtained and the rapid rise time all serve to qualify the oil pressure ‘off load’. But, what about during prolonged road-testing?

Fig 7 shows the measured oil pressure from Harlow Essex to Pico UK in St Neots. This journey had numerous load conditions, from high-speed motorway driving to stop/start traffic and everything in-between. The lowest recorded oil pressure was 1.112 bar other than during engine halt conditions in traffic. This data was enough to convince me we did not have an oil pressure issue as alluded to by the customer. 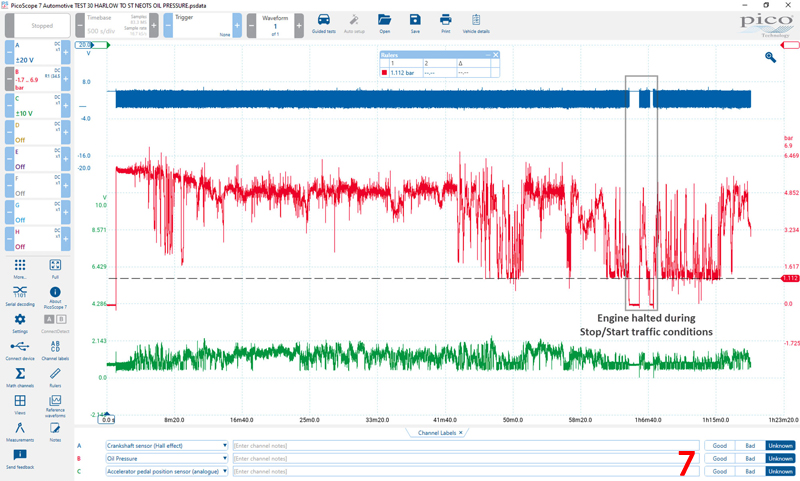 We removed the inlet valve actuator (TwinAir actuator) and inspected the inlet valves for ‘mechanical’ sticking/operation. As you can see in Fig 8, there were no carbon deposits on the valves or any debris that could intrude between the valve stem and the valve guide. Physically pressing the inlet valves down (to open) confirmed adequate, smooth closure with no interference or restriction of movement. Further examination of the cylinder head and valve train qualified adequate oil bathing and no damage to the valve springs. 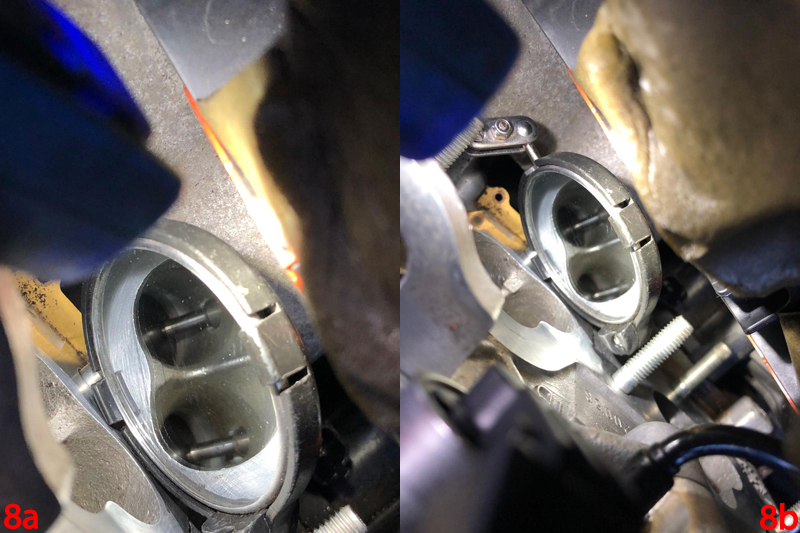 We replaced the inlet valve actuator (TwinAir actuator) and reassembled the engine ready for post-fix measurements at cold start. You can see the results of the initial cold start after replacing the TwinAir actuator in Fig 9. After the initial start-up, we could see stability return to the intake manifold pressure waveform where we had even intake pulsations.

I wanted to focus on the engine speed signal at 2,705 ms, as I noticed during the initial start-up that the engine momentarily misfired! This is one of those heart-in-mouth moments when you think: “Have I misdiagnosed?”. Closer analysis of the intake manifold pressure waveform confirmed that the intake pull during the momentary misfire was stable and equal to the neighboring pulsations. The most likely explanation here is purging of the fuel lines post start-up or indeed a one-off combustion anomaly as the engine ‘settles’ post repair. The beauty of the post-fix analysis is that you not only qualify the repair, but also put your mind at ease when such momentary events occur (this momentary event was not due to low compression).

The following test (Fig 10) captured free revving of the engine shortly after start-up as misfires may well be more pronounced when cold and under load. 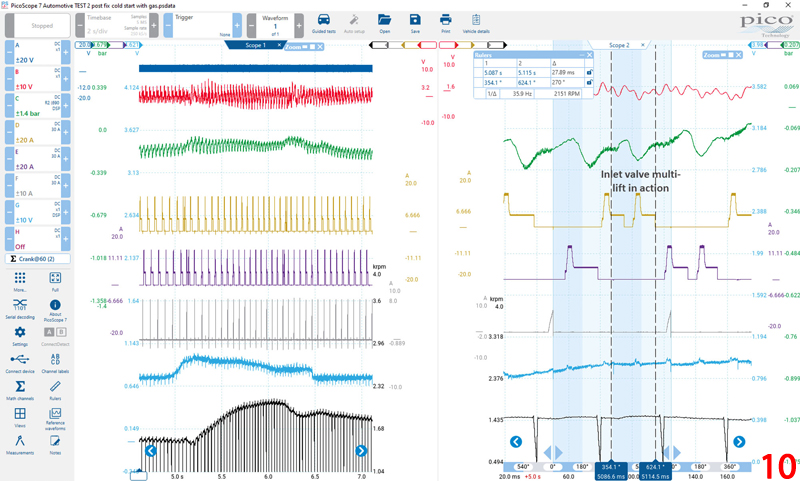 The engine performed flawlessly, but also threw another curveball at me that I had not seen before.

The scope view on the right highlighted a managed inlet valve condition called ‘multi-lift’ at low load, which allows for optimisation of combustion in these driving conditions. Note how the inlet valve initially opens around the more conventional crank angle of 354° ATDC compression but closes midway through the inlet stroke (360°–540°) only to open a second time at approximately 540° ATDC compression! How cool is that! You should also note the effect this had on the intake manifold pulsations. 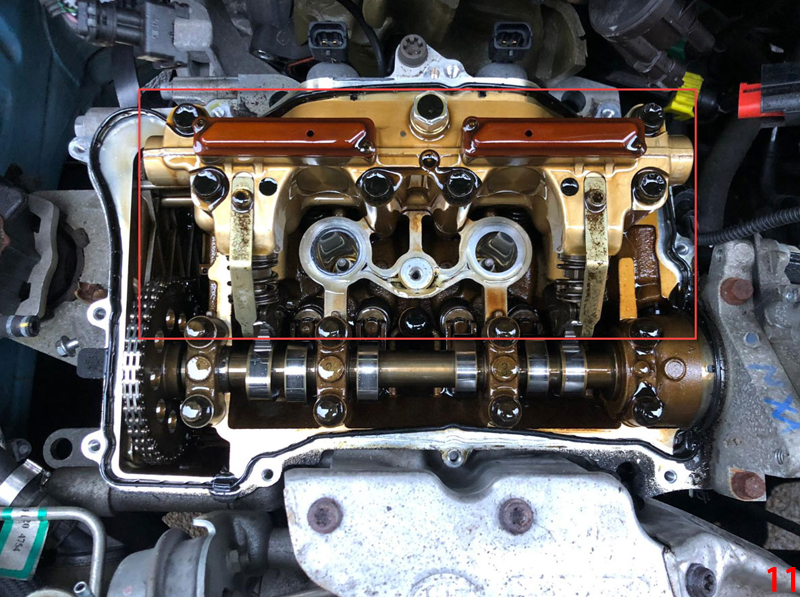 Reading through this case study, the combination of customer concerns and fault code descriptions had me thinking of all kinds of doom and gloom for this vehicle.

When taking all the above into consideration, sequenced diagnosis of each customer/fault code description allows you to eliminate fact from fiction and present the repaired vehicle with complete and total confidence.