Example 1: Vibration due to old or damaged exhaust rubber supports. 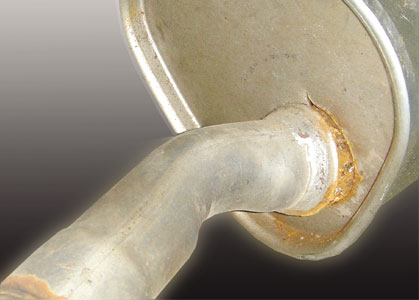 A broken exhaust as a result of vibrations from worn out exhaust rubber supports.

This is the most common of all the vibration-related exhaust problems and also the most easily avoided.

The exhaust supports are mainly made of rubber, which has a life span that depends on the external environmental conditions, and the factor that affects most rubber supports is the working temperature.

When rubber is exposed to high temperatures for long periods of time, the chemical composition of the material gradually changes to become harder and less elastic. These chemical alterations cause the exhaust’s rubber supports to transmit any impacts to the exhaust system instead of absorbing them, resulting in severe damage to the system.

The easiest way to see if the problem is down to the rubber supports is to check the area where the pipes are welded to the silencers. If the problem is caused by the rubber supports becoming hardened or brittle, the pipe work will be loose at the silencer cover, and you will see a perfect formed circle or semi-circle, as if the joint had been purposely cut. This is caused by the enormous amount of vibrations produced in this connection area.

Tenneco’s advice to avoid this type of problem is to always replace the old rubber supports of the exhaust system with new ones when you change a broken silencer or complete system. 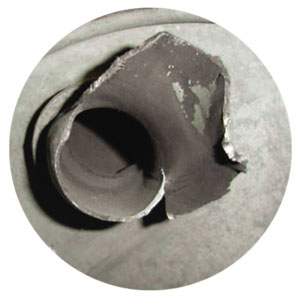 Worn out rubber engine mountings can cause exhaust damage.

The main function of rubber engine mountings is to absorb the vibrations (lateral movements) generated by the engine while it is running. These elements are also submitted to a faster chemical deterioration process due to the high temperatures and pressures existing in those areas.

In some rear-wheel drive cars, vibration problems become even worse because the universal coupling joints, joining the transmission and prop shaft, can become damaged or worn. This situation will generate more side movements from the exhaust that will dramatically increase the lateral tensions of the exhaust system parts located closer to the engine.

Failure of these components generates an irregular sheared effect, due to the constant transverse torsion forces. The best way of avoiding this problem is to replace these components at specific service intervals as stated by the VM – generally between 25,000 and 50,000 miles.