In this article we are returning to a familiar theme – how polyurethane suspension bushes can be used to address some of the shortcomings of original equipment rubber bushes in modern suspension design – specifically in front control arms. 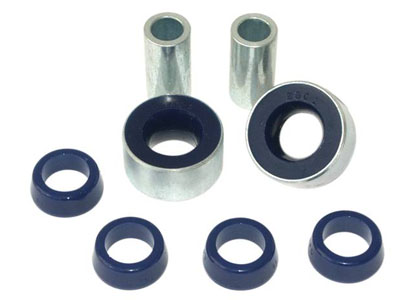 The movement by car manufacturers to subframe assemblies where the undercarriage and engine/transmission module are fitted to the car from underneath has led to a change in the design of front control arm bushes, with interesting consequences for the arm’s rubber bushes performance and longevity.

The traditional mounting of control arms was achieved with both location points using a bolt or pin aligned in the horizontal plane. 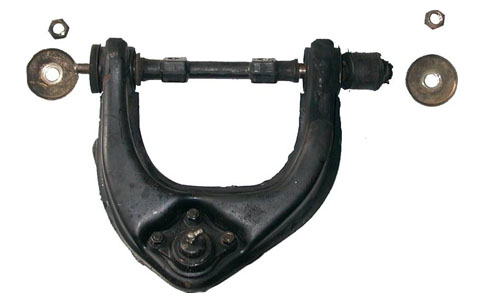 More recent control arms have been designed to reduce assembly times on the production line and have adopted the vertical pivoting bushing or VPB. The VPB allows for the locating pin or bolt to align in the vertical position (see position B, below) while often retaining the traditional mounting in horizontal plane for the other location point (see position A, below).

This concept has led to significant design changes for the rubber suspension bushings due to the way they work and the control arm shape in which they are located. The VPB also saw the introduction by many manufacturers of segmented or directional shapes and designs to these bushings. This was to take advantage of opportunities for passive four wheel steer, to help cope with increased engine power and to work within more sophisticated suspension designs. 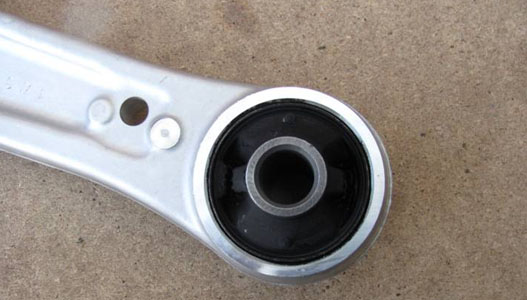 However, these original rubber VPB mounts, whilst providing a cost-effective mounting solution, are asking a lot of the material. All of the articulation of the suspension arm is delivered through the rubber flexing. This movement, often combined with voids to facilitate articulation or minimize NVH, can lead to distortion under high lateral loads and accelerated wear rates as the bush tries to tear itself apart. The result? The bush allows the road surface and cornering forces to move the front wheels independently of steering inputs with consequent loss of steering geometry, potentially giving the driver a sense of vagueness in the steering feedback, increased torque steer and uneven tyre wear.

SuperPro has been developing innovative polyurethane suspension bushing designs for over 25 years and saw a need to develop a VPB that would not distort under high lateral loads. The company began the development of a unique VPB replacement bushing in 1994 with the first range of vehicles developed being the European Ford Escort Mk 5 onwards. 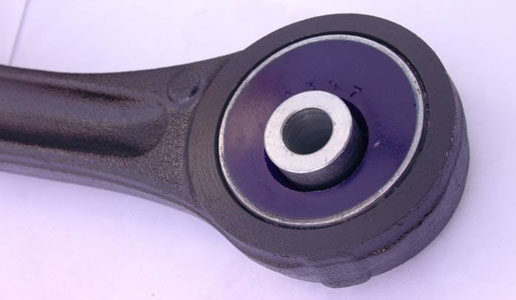 This was not a simple process of copying the original rubber bush in polyurethane – to do so would effectively replicate the problems of the original rubber bushes. Something more innovative would be needed if the control arm were to be able to articulate freely without an increase in noise, vibration or harshness. Without compromising safety, the new bush would have to last longer, yet still takes advantage of the materials’ known capabilities for improving the suspensions performance.

The result is a sophisticated yet simple solution that allows free pivoting while positively locating the bush.

Each bush is an assembly of four components – first a steel encased outer bush which presses into the control arm. This bush features a convex inner bore, which at its narrowest point is a tight fit around the second component, a steel tube. This tube is inserted in the outer bush – note the gap between the tube and the bush.

Finally we have two polyurethane cones which neatly fit over the ends of the tube to complete the assembly.

This unique bushing allows the control arm to pivot in the vertical plane with minimal resistance, however remain positively located in the horizontal plane.

The SuperPro polyurethane VPB ensures that all steering loads and suspension movements will be directed to the steering road wheels. The result? Positive location means consistent steering geometry, in turn offering high levels of feedback through the steering, reduced torque steer and consistent tyre wear. The free pivoting movement of the arm without requiring the material to flex, coupled with SuperPro’s long lasting properties, will ensure that this performance is sustained for many miles to come.