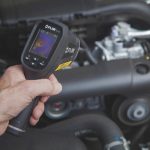 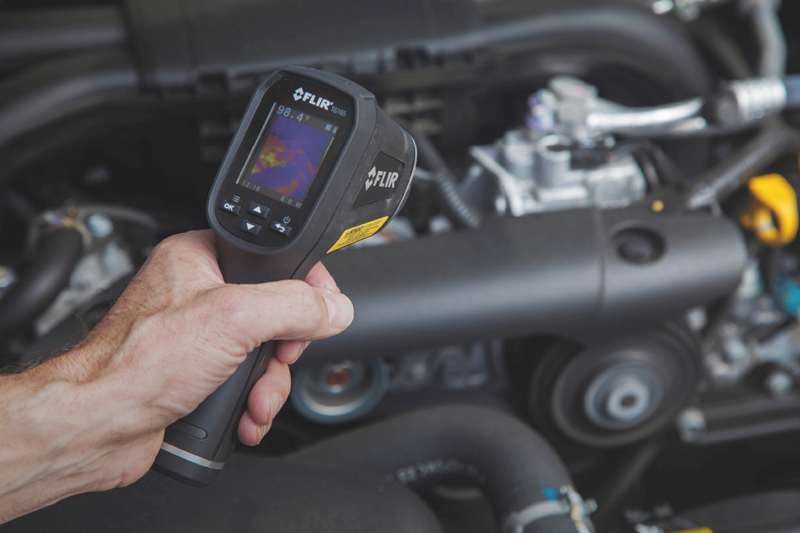 I have long been interested in the use of these thermal imaging tools for automotive applications, so when i was given the chance to test one, I jumped at it. The device in question is a spot thermal camera, which is a great deal more than just a thermometer and some way towards being a full blown thermal imaging camera.

The product has the facility to view the component you’re looking at on a clear and easy to see 2” colour screen and has a 25 ̊ field of view, allowing more accurate detail from a greater distance. It is ideal for most garage and automotive applications as it is not only durable – it can be dropped from a 2m height – but is also very easy to use.

When you want to capture what you are looking at, you simply press the trigger and the image is saved to the memory card. The capacity of the card will allow up to 75000 images and these images can then be downloaded via the card or using a USB lead (both of which are supplied) for proof of the diagnosis for the customer. The device is powered by an internal battery capable of some 30 days’ use and is fully recharged within six hours.

In the short time I have used the TG167, I have had a few great jobs for it to be fully harnessed on, and I’m sure it’s the type of tool that you will find all sorts of uses for once you get to grips with it.

The first job I used it for was on a VW Golf R32 with a short circuit on the HVAC supply fuse. I quickly studied the wiring diagram, which showed the circuit was feeding various hard-to-reach components. In this instance, using the conventional method of isolating each circuit could have taken some time. I installed a light load across the fuse and followed the circuits using the camera and quickly found a heat source at the bottom of the condenser, which was hard to see, let alone reach. With the confidence to now start stripping panels to gain access, I soon discovered that the fault was a short to earth within the refrigerant pressure sensor.

The second job was more of a mechanical issue with an older BMW E36 heater system that was not performing too well. The customer had checked the cooling system and located a possible fault in the heater matrix, but the cost of replacement was close to being uneconomical when compared to the value of the car. We filled the matrix with hot water from a boiling kettle and scanned the matrix to confirm poor circulation – bingo! We then flushed the matrix with a chemical cleaner several times and re-checked it to confirm flow was significantly better. After refitting, the customer was happy heat was restored and the cost was a fraction of replacement.

I can see several uses from confirming heating elements (HRW, seats etc.) to detecting mechanical issue like misfires and even sourcing electrical short circuits and with the cost of these devices now within reach of even the garage technician, let alone the garage owner, I think it is soon going to become a must-have tool.