The groundswell of technological advancement in passenger cars requires new thinking about powering and charging vehicle electrics. AutoMate Training delves into smart battery charging technology to investigate why we need it and how it works.

In the modern age, software, advanced sensors and sheer processing power have replaced – to a large extent – hard, mechanical ingenuity at the forefront of technological progress. This is especially the case in the automotive world, where key symbolic pursuits – autonomy, electrification and connectivity – are driving an astonishing pace of development, limited only by the bounds of computing power and the confines of human imagination.

For automakers, change is now approached differently, whereby a new, highly-demanding and tech-savvy customer base is turning the market into an innovative frenzy, where the latest in mobile, navigation, safety and entertainment technologies are coordinated.

In the modern market, there are downsized, highly-efficient turbo engines that are increasingly augmented by mild-hybrid drive, with cylinder shut-down on demand and startstop technology for maximum efficiency. Advanced, computer-controlled automatic transmissions, with nine and even 10 speeds, occupy 90% of the market, and Bluetooth connectivity is regarded as a basic right. Then, there’s the on-board safety net. Today’s vehicles consist of active safety systems to such a degree that even modest vehicles are now verging on the realm of semi-autonomy.

Clearly, then, this profound richening of technological content across the car parc is beneficial for consumers. However, for automakers, the task of filtering these systems into their line-ups presents a major challenge. For example, in an industry where weight-saving is paramount due to strict emissions standards, the burden of equipment can wreak havoc on the scales. It also requires intense durability testing to ensure the longevity of fragile electronics in even the harshest terrain.

And then there’s the sheer load placed on the vehicle’s electrical system. While many vehicles continue to run 12V systems with lead-flooded batteries, going forward, lithium batteries will undoubtedly be popularised as manufacturers look to support ever greater loads with smaller, lighter cells. We’re also seeing a dramatic rise in the number of vehicles fitted with secondary 48V electrical systems, designed to support a power-hungry gamut of technologies like mild-hybrid drive, e-turbocharging, active suspension and so on.

Already, cars as commonplace as the Hyundai Tuscon and Mercedes-Benz C200 feature these 48V sub-systems as standard, and we can expect a glut of followers to hit the market in the next 12 to 24 months. From a service and maintenance perspective, this rapid development presents a number of vital challenges, particularly in the area of charging.

Indeed, in the same way the term ‘smart phone’ has come to replace ‘mobile phone’, the phrase ‘smart charger’ is increasingly prevalent in the automotive aftermarket. Compared to an old-style, linear charger, ‘smart chargers’ offer a new level of control, monitoring and functionality for technicians, better-equipping them to deal with complex vehicle electrical systems and technology.

As we know, in its most basic form in a lead-flooded battery, charging is intended to regenerate the active materials from lead sulphate formed during the discharging process, known as ‘sulphating’. In the process of a battery discharge, sulphate ions from the electrolyte react with the lead electrodes to form lead sulphate. Upon recharging, these compounds dissolve with the sulphate ions returning to the electrolyte.

Older-style, constant-current charging maintains a pre-selected current until a specific voltage has been obtained at the battery. Without careful monitoring and control of the charger, however, overcharging and overheating in the battery can occur, causing long term damage or immediate battery failure. In short, this traditional technology is now outdated, so it’s not recommended for use on today’s batteries. 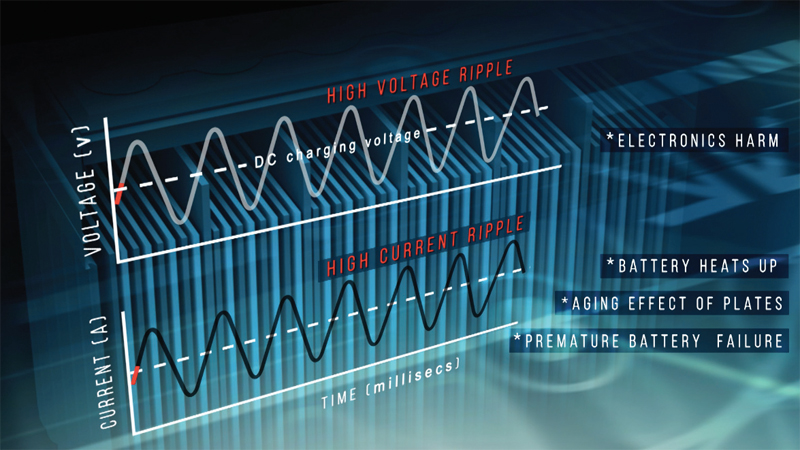 On the other hand, ‘smart chargers’ have the ability to communicate with the battery during the charging process, allowing them to regulate the pace and strength of the charge in accordance with the prevailing battery level, temperature and so on. They achieve this most commonly by operating in a series of stages, so while each type of battery chemistry needs to be dealt with in a slightly different way, they can all be charged, maintained and rejuvenated by a smart battery charger. To understand how, it’s crucial to explore the different phases of the smart charging process.

To start the charge, a high frequency voltage pulse assists in the regeneration of a deeply discharged battery. This method of pulse charging can also help reduce the excessive sulphate crystals that may have formed on the battery plates during its discharged state. 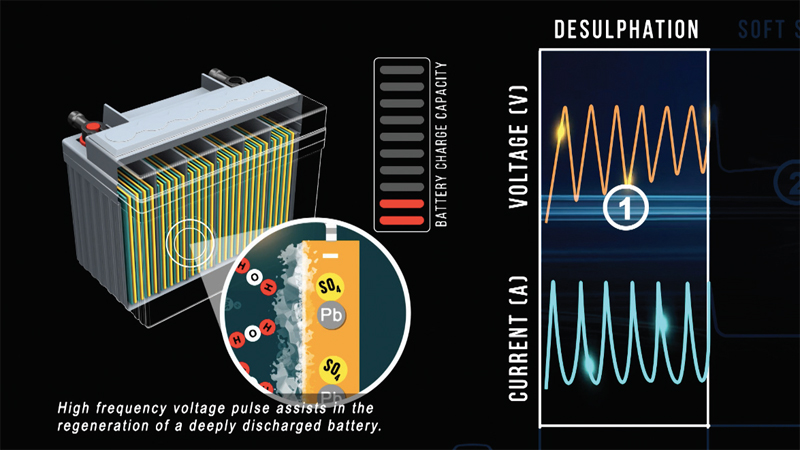 Next, the soft start phase tests if the battery can actually accept a charge. This step prevents charging proceeding when the battery has an internal fault, something that wouldn’t happen with a regular, linear-style charger.

Once it’s confirmed the battery can accept a charge, the main charging stage commences. It’s during this phase that the charger operates at its maximum output, current and voltage – until the battery reaches 80% of its capacity.

After this bulk charging stage, smart chargers will automatically begin to reduce their current output as the battery approaches maximum capacity, whilst still maintaining the required voltage. Only when a predetermined current level is reached will the next stage commence.

The next step is for the charger to test if the battery can hold a sustainable charge. It’s at this point that the charger will determine whether the battery is in good condition, and those that cannot hold pre-determined charge may need to be replaced.

Most chargers also allow you to select an extra program known as ‘Recondition’. During this phase, the voltage increases to create a controlled gassing in the battery. Gassing mixes the battery acid and gives back energy to the battery, making this a critical step for batteries that require rejuvenation.

Finally, a ‘pulse maintenance mode’ allows batteries to naturally self-discharge to a certain level, before being fully charged again. Not only does this avoid the risk of overcharging, but as the battery is being cycled as it would in a vehicle, the lifespan of the battery is extended considerably. Understanding these phases is a crucial part of any exploration of smart charging technology, and speaks to the increasing complexity of once-simple maintenance and repair processes.