PMM meets FlexFuel Energy Development (FFED), to find out why its HY-Carbon technology stands out from the crowd.

This approach has received multiple industry certifications and recognition from:

It is currently in use in over 200 ships and at large national train operators, including SNCF. Today, FFED is working on a new generation of its technology in collaboration with the French Defence Procurement Agency (DGA) to develop and optimise a mobile carbon cleaning and maintenance unit for high powered civil and military ship engines. 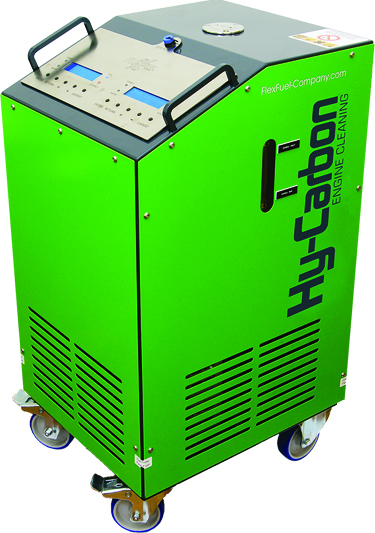 In 2014, FFED developed a hydrogen injection system specifically for the automotive sector, and HY-Carbon was launched. In 2015, the company was granted a worldwide patent for its HY-Carbon EGR pilot – which can electronically control the opening and closing of the EGR valve to allow a more thorough engine clean.

In 2018, FFED introduced its HY-Carbon technology to the UK market. Today, its distribution network includes more than 800 centres in France, Belgium and the United Kingdom.

How does HY-Carbon technology work?

By injecting hydrogen into the intake manifold, carbon deposits are eliminated from key engine components responsible for performance and emissions – the admission valves, the EGR valve, the turbo and the particle filter. Independent engine tests post- cleansing show up to 50% lower emissions, the return of engine power and reduced fuel consumption. Independent tests also show that an engine treated with HY-Carbon technology reduces emissions by up to 50%, improved fuel economy by 15% and a near 8% increase in engine performance.

What makes HY-Carbon different to other solutions?

There are a plethora of chemical cleaning products available to consumers and garage owners, but they are not without their own environmental impact. They come with health and safety warnings due to the toxic and hazardous ingredients used.

HY-Carbon is entirely environmentally friendly and non-hazardous. It is also fully automated, meaning that a technician is not required to manually operate the solution.

Whilst there are other hydrogen-orientated cleaning solutions available, HY-Carbon is designed, engineered and configured in France to strict industrial and regulatory standards, thus ensuring quality, safety and longevity.

Another differentiator is HY-Carbon’s patented EGR pilot valve. The pilot valve electronically controls the opening and closing of the EGR valve, without needing a technician’s input. HY-Carbon only requires distilled water and a standard power point, and produces around 500l/h of hydrogen. There is zero maintenance and near zero labour time.

No consumables, no maintenance, and no labour makes HY-Carbon one of the most profitable machines in the workshop.

Purchasing options and return on investment

FFED is offering a long-term lease for HY- Carbon. Leasing is priced at approximately £300 per month. When parts become clogged up, they prevent the engine from working properly. If carbon deposits are not removed regularly, the car will break down and the bills will soon mount up. The cost of an EGR valve can be up to £300, excluding labour; turbos and DPF filters can cost over £2,000, again excluding labour charges.

Garage owners only need to treat three vehicles per month to cover their costs. When you consider the percentage of engine failures or MOT failures that are due to dirty engines – 75% – then that is a real business opportunity for garage owners.