The events of 2020 had a tremendous impact on the year’s new car sales figures. Does this mean then, that there is an opportunity for the aftermarket to cash in on added value services? FlexFuel explores the possibilities.

To take just one month as an example, new car sales fell by 4.4% in September 2020 compared with 2019 – a whopping 16% lower than September’s 10-year average. This provides a real revenue opportunity for the aftermarket sector with fewer people buying new and deciding to keep their existing vehicle(s) on the road. Many observers predict the downward trend in new car sales will continue, whilst the motor vehicle repair industry is set to continue to increase.

So, how can the aftermarket look to generate incremental revenue whilst not exposing themselves to increased risk? Hydrogen engine treatment is not a new phenomenon in the UK, yet the early days of its introduction were blighted by poorly designed and configured machines from the Far East, or repurposed technology that was never designed for engine treatment in the first place – repurposed welding machines for example.

Hydrogen gas acts as a natural solvent on carbon. By introducing it in higher density into the engine results in a better clean. FlexFuel’s Hy-Carbon solution is one of the leading offerings on the market today. The Hy-Carbon 1000s produces in excess of 1,000L of hydrogen gas per hour, far exceeding competitive offerings. It is entirely chemical free and requires only a power point and deionised water; above all else it requires near zero manual intervention.

David Johnson, owner at DNA Automotive Solutions, a recent FlexFuel Energy Development partner commented: “We have been using FlexFuel’s Hy-Carbon for only a short period so it is early days, but we’re finding that it is a fantastic tool to have in the workshop, and it definitely pays its costs each month with some new custom being generated off the back of it. 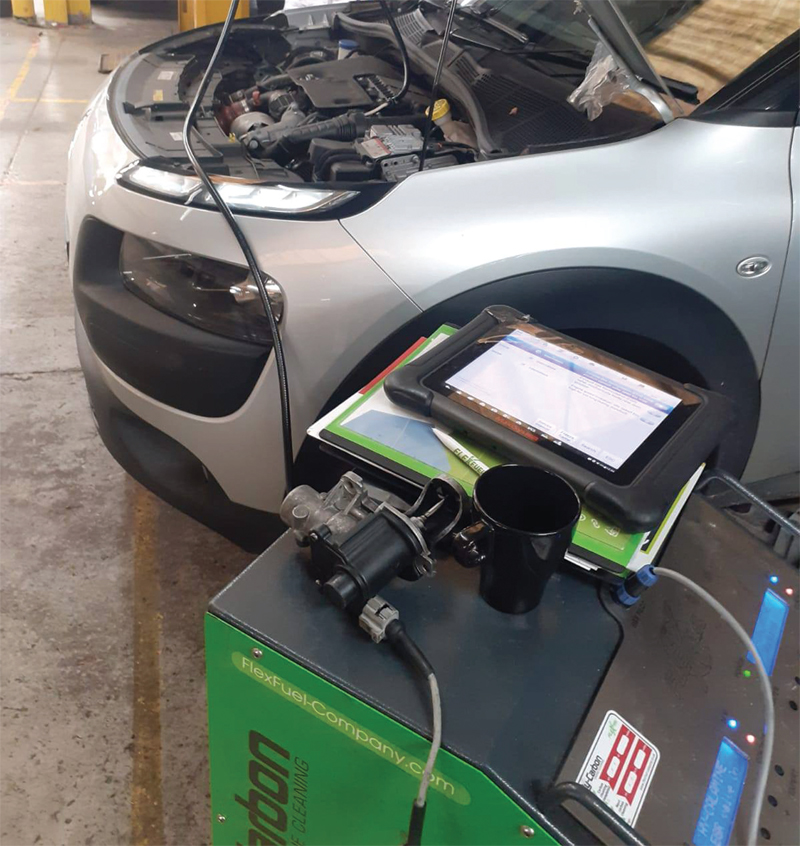 “We have had loads of amazing feedback from our customers who have had a 60-minute engine clean. One customer, who brought in a 2019 VW Transporter on 18,000 miles, rang us on his way home to say he couldn’t believe the difference in drive and that the DSG was even shifting better. A second customer with a 2005 Citroen Berlingo van recorded a 100-mile-per-tank of fuel increase after the treatment! We also had a 2008 Audi A3 2.0 tdi that was going into limp mode with an overboost issue, so we delivered a 90-minute clean and the owner reported that there were not only no more limp issues, but also a smoother power delivery and better boost.

“Overall, we’re extremely pleased with the tool and more importantly the level of customer service FlexFuel has provided to us at DNA Automotive. We definitely haven’t looked back from our journey into Hydrogen cleaning.”

Neil Chapman, one of the earliest adopters of FlexFuel’s Hy-Carbon machine in the UK, commented: “I have been a FlexFuel customer for nearly two years. In only a few months, I purchased the machine outright; I could see that this would be the most profitable machine in my workshop. It is near autonomous, it does not take a mechanic away from other jobs, and can run in the corner and do its job. Importantly, there are no consumables or chemicals, which reduces running costs and stops toxic emissions associated with traditional chemical engine cleaning. The feedback from customers has been fantastic to date.

“I have a strong service customer base and many are now having an engine clean as part of their annual service plan. They are all reporting improved mpg, better engine performance and generally smoother running. At a curative level, it is being used on sticky EGRs, turbos and blocked DPFs. For vehicles failing emissions on their annual MOT test, it is also proving to be highly effective in reducing emissions and ensuring a successful pass.”

The trading conditions for the automotive sector will continue to remain challenging. But, rather than focusing on more of the same, the aftermarket sector has an opportunity to do something different and look towards new technologies which are proven to provide value to customers and revenue return for garages.