Perhaps less publicised, but of no less importance to a vehicle’s braking system, is the humble brake hose. These perform a simple yet deeply important function: the transfer of brake fluid to the brake caliper or wheel cylinder, forcing a brake pad onto disc. In other words, the behind-the-scenes work between the depression of the brake pedal and the vehicle stopping.

Why the requirement for a hose change?
Car owners generally expect to replace brake discs and pads during a vehicle’s lifetime, in general, due simply to wear. Thankfully the deterioration of brake discs and pads is usually associated with very clear, tangible signals, such as noise on application, reduced performance and visible disc and pad abrasion.

However, the majority of vehicle owners are simply unaware that ‘wear’ also applies to brake hoses, with numerous reports stating that many owners will never change, or even think to replace the component. Perhaps this is not solely the fault of the end user; it would appear that very few garages and mechanics regularly recommend hose replacement before its absolutely necessary, or prior to some degree of failure. As a general rule brake hoses have a life cycle of around five years, and while this can change dependent upon use and climatic conditions, at some stage all will require replacement. 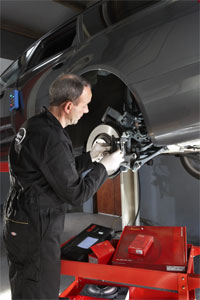 There are a number of reasons why brake hoses deteriorate, which includes a multitude of factors such as the temperature of the caliper and brake drum, the aggressive nature of braking fluid, the consistent movement of the hoses during driving, a hose’s susceptibility to varying weather conditions and changes in temperature and the corrosion associated with road salt. The fact is brake hoses lead a hard life, and as such, must be viewed as wear and tear items in the same vein as the other major components of the braking system.

fluid. As the water ratio increases within the brake fluid, the boiling point of that fluid lowers dramatically; in fact just 4% of water content within the brake fluid could cause the fluid to boil, which in turn switches to a gas state. As gas is less dense and more compressible than liquid, so drivers will feel their brake pedal start to travel further while braking performance is reduced or eliminated entirely. This could happen progressively or (if a crack or tear appears) instantaneously – the effects of which does not bear thinking about.

This condition, known as ‘Vapour Lock’, can prove to be extremely dangerous and the signs that lead to it are visible only through a detailed visual and physical inspection.

Signs of impending failure include wet or pasty areas (usually around the back of the fitting ends), bubbles or blistering across the surface of the hose, small cracks on the outer layer as well as chafe marks. Less obvious signals also include soft or easy to bend as well as hard or brittle hoses, and, from the driver’s seat, a spongy or less resistant brake pedal feel.

Aftermarket challenges
In recent times both the VAG group (Volkswagen, Audi Seat and Skoda) and Vauxhall have adopted increasingly elaborate brake line systems that run in parallel along each side of the vehicle’s axle and these use a veritable jigsaw of pre-bent steel metal piping within their construction.

In essence this is in order to deter aftermarket brake specialists from replicating the design, and while Apec is one of the few who has been able to integrate this more detailed specification and production into its manufacturing process and product range, supplying brake lines that match this new OE specification precisely, there are some companies that are unable to do so, instead supplying flexible tubing (or even metal tubing) that requires alteration and bending on site. 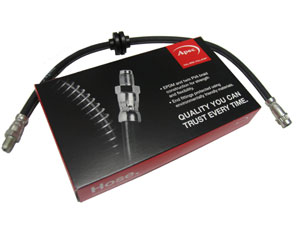 Apec’s alternative
Manufactured on advanced, automated production lines to exacting tolerances, all Apec hoses feature a multi-layered construction to offer exceptional resistance to heat, the ozone and weather conditions. Additionally, rigorous testing procedures include assessment of corrosion within the brake hose itself, as well as analysis of leakage, whip and burst pressure trials up to 200 bar, volumetric expansion and brake fluid compatibility testing.