What goes around comes around. For timing chains, this is true in more ways than one. FAI Auto guides readers through some of the things they need to be aware of when encountering this resurgent technology in the workshop.

Since the late 60s, timing belts have dominated the market. Quieter and easier to fit than timing chains, their development by GM was a revolution in engine technology. Most manufacturers followed suit and just a few manufacturers, including BMW and Mercedes, were left using timing chains.

Many of the older generation of mechanics will still remember the days when all popular engines were timed using chains and, ironically, some of the younger technicians may have some experience with them too. This is because for the past 10-15 years the market has been witnessing a renaissance of the timing chain, with the technology being used on many popular high-volume engines.

These new generation chains are a far cry from the chains used half a century ago: they are far longer; much lighter, being made from modern alloy steels; and quieter. In addition, they can withstand greater forces and operate with less friction than a timing belt as they are contained within the engine’s oil-filled atmosphere. It is for these reasons that many OEs have reverted to using timing chains as a “fit for life” product instead of belts that need replacing at set times/mileages.

Despite the OEMs’ optimistic “fit for life” claim, most garages now replace TCKs on a weekly basis. Which brings in good business as a TCK requires more labour to fit than a comparable timing belt replacement. Most replacements are due to chain wear, which can usually be attributed to the following: a failure to adhere to service schedules; a hostile engine environment such as low oil levels, particle, or fuel contamination; extensive idling periods; or a mixture of the aforementioned. When a chain kit is being replaced it is vital that the cause of the original failure is identified and rectified – failure to do so could see the new TCK fail relatively shortly after installation. 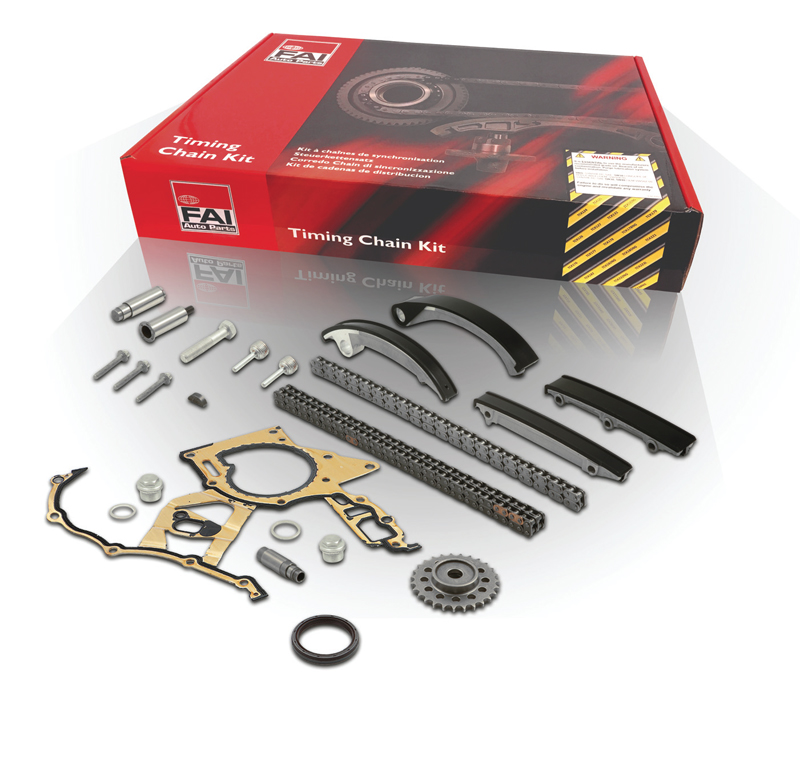 It is important to follow any removal and installation procedure using the correct professional timing and component locking equipment, in accordance with professional instruction.

Lab tests on oil from failed engines have shown the wrong grade/specification or poor maintenance creating contaminants (carbon, metal particles, fuel, water etc.) being suspended within the oil. These foreign bodies are carried around the engine and in the case of the TCK cause premature wear of the chain and sprockets. Plus, the debris blocks the feed holes into the tensioner(s) and VVT hubs, eventually starving the tensioner and VVT of oil and rendering it ineffective. This means that it is imperative that when any TCK is installed, utmost care must be taken to ensure the sump, oil galleries and oil pump are clean and undamaged and new oil and filter is fitted.

For any engine to operate correctly, it must use the correct grade of oil as modern oils are very complex structures which are critical to an engine’s performance and long life. This is particularly important when the valve timing is chain driven.

Replacing the old oil with an incorrect grade will most certainly cause failure. A timing chain relies on two things to keep working: firstly, lubrication, so that the metal parts do not make contact (at a molecular level) preventing seizure; secondly, tension, which in a modern engine is produced 99% of the time by a hydraulic tensioner applying pressure to one or more contact points on the chain. If this pressure is lost or reduced in any way, the chain will start to oscillate, fatiguing the metal link and pin of the chain. This will eventually cause the chain to break in one or more places. Before this stage, it is likely that you will get the customer back complaining of a rattling chain.

All hydraulic tensioners receive their oil feed via an inlet port or valve, the diameters of which range from 1.5mm to 0.50mm. If there is contamination in the oil (carbon, metal swarf etc.), the feed holes can become blocked very easily, starving the tensioner, which in turn will fail to apply the correct load to the timing chain. It is also important to change the oil filter so that any contamination is not carried over into the new, clean oil. 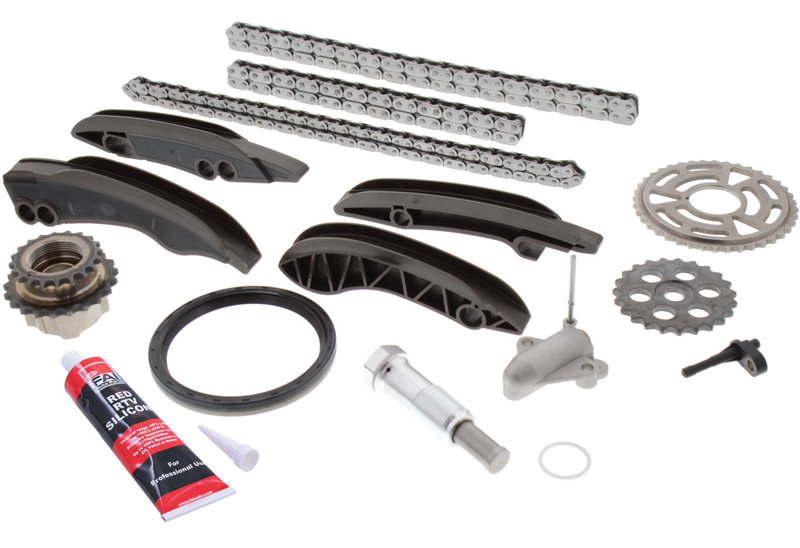 To enable today’s chain kit to survive it must be fitted to a clean and uncontaminated environment. FAI also recommends that the engine lubrication system is flushed just before work is started to remove the old timing chain kit. This will remove the majority of contaminants that will have built up over the life of the engine. During installation, the sump should be removed and inspected/cleaned along with the oil pump and pick up pipe. Spending a little more time cleaning in conjunction with using the correct oil and new oil filter will ensure that the timing chain kit will perform optimally, as long as recommended servicing and oil changes are adhered to.

On the occasions we have received timing chain kits back from customers under a warranty claim, we have requested that an oil sample of 120ml from the engine is submitted for analysis. To date, most samples have shown excessive levels of contamination. Primarily made up of Silicon (Si) otherwise known as dirt, Iron (Fe), fuel (petrol/diesel), water (HÇO), Copper (Cu), Lead (Pb), Chrome (Cr) and other trace elements. The report gives a very good indication of the condition of the engine at the time of failure, most reports depict a hostile environment promoting wear and reduced hydraulic function.

To sum up, TCK installation should be carried out not just as a remove and replace, but as an investigation into the cause or causes of failure. These problems must be rectified in order to ensure your customer has trouble-free motoring for many more years to come.