MS Motorservice explains everything you need to know about electropneumatic valves.

Electropneumatic valves are small, unobtrusive and frequently fitted within areas of the engine compartment which are difficult to see or access. The function of the valves within the pneumatic system of the vehicle is equivalent to the function of switches and dimmers in electric circuits.

In connection with a pneumatic actuator it is thus possible to operate valves or to control turbochargers, for example.

They offer the following advantages:

In newer vehicles often several electropneumatic valves have been built in. 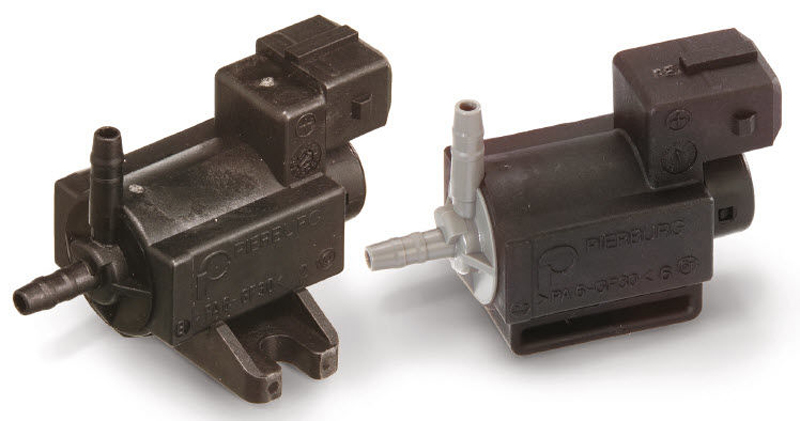 Operation of a switch over valve is comparable to a switch in an electric circuit: Pressure/low pressure is “switched over” between two connections.

Newer switchover valves may also be driven by means of pulse width modulation.

In order to drive the newer types of electropneumatic valves by the engine controller, a control current is necessary. However, this control current is not DC but is instead a current which is clocked at a constant frequency (“pulse width modulation”).

The switch on duration of a pulse is here termed “duty cycle”. Depending on whether the current or the duty cycle is used as the command variable, such an electropneumatic valve is designated as being “current controlled” or “duty cycle controlled” (respectively “clock controlled”). Pressure transducers are used in large numbers in exhaust gas return systems and VTG chargers. Their operation resembles that of a “dimmer” in an electric circuit. From the low pressure and the atmospheric pressure, a mixed pressure (control pressure) is generated within the pressure transducer through which the pneumatic actuators can be adjusted in a continuously variable manner.

Since electropneumatic valves are used in many systems of a vehicle, the symptoms which indicate a malfunctioning or failed valve can be highly varied and include: insufficient power; turbo lag (in the case of turbochargers); black smoke; jerkiness; and emergency operation (in case of a malfunctioning valve in the EGR system).

Electropneumatic valves are monitored by the ODB (on board diagnosis system) not as to their operation but instead as to continuity, short-circuit and short-circuit to ground. For this reason failures are not reliably detected and malfunctions are frequently attributed to other components.

Causes for a valve malfunctioning or failing include: water and dirt which have entered into the system of the controlling low-pressure; high ambient temperatures can cause intermittent malfunctions; in rare cases malfunctions are caused by confused connection hoses; or a defective vacuum pump may be delivering an insufficient low pressure for properly driving the valves.