ANALYSIS
■ Communication with all control units (except the ECU) is effected via the CAN ‘gateway’.
■ The ECU is connected to the CAN gateway, but also directly connected to the on-board diagnostic link connector.
■ The immobiliser control unit is located in the instrument cluster. In the event of no communication with the instrument cluster (as proved by the fault codes stored in the ECU) it should be impossible to start the car. The vehicle is running, however.

Communication is a critical aspect relating to the construction of modern cars. It has a dual function:

2. The exchange of data between on-board control units and the diagnostic tester.

Vehicle details
In this article we’ll cover both communication examples and show their mutual correlation, using the 2008 Volkswagen Caddy as an example.

The on-board control units aren’t provided with autonomous diagnosis, which means that they communicate with the diagnostic tester using a dedicated control unit, called a CAN ‘gateway’. 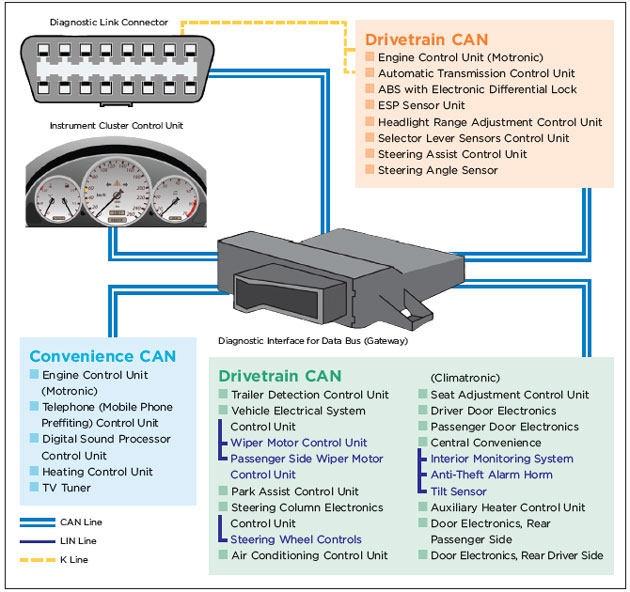 Fault description
The vehicle in for repair was suffering with an electrical fault. Traces of previous activity (likely undertaken by other car mechanics) was clearly recognisable as the control units installed had marker pen inscriptions on them and the ECU itself showed traces of being opened.

Once the tester was connected, it turned out that the only control unit able to communicate was the ECU. The fault codes stored in the ECU indicated a lack of communication with other control units including, among others, the instrument cluster.

After reviewing all of the information and symptoms we had available it was then a case of trying to analyse the data and determine the next step.

Course of action
1. We connected the CDIF/3 tester from AXES and selected VW Caddy (2K) from the list.

3. We then checked the fuses installed in the vehicle. All fuses proved to be OK.

5. We then checked the power supply on pins 1, 2 and 14 against the ground – there was no power supply on any of those three pins. Since the feed lines run to the fuse box near the battery in the engine compartment, we inspected the fuse box and found a burnt path inside.

6. In order to confirm that the fault we had found was having an immediate impact on the malfunction of our car, we decided to conduct an instant repair by soldering a wire in the missing path area.

8. We ordered a new fuse box and, after its replacement, the vehicle was once again fully operational.

Conclusion
This wasn’t an obvious case as the vehicle was starting thanks to the deactivated immobiliser. Additional symptoms, such as no illumination of the instrument cluster and the defective tachometer, made the entire picture seem less logical than it should have done at first.