Diesel systems utilised in many of today’s modern cars typically feature more than 120 components on the vehicle, all ‘talking’ to one another. As diesel technologies become more advanced, the precision needed to repair these components is almost surgical in nature. Making sure you are working with a reputable repairer, therefore, could mean the difference between a happy or unhappy customer.

This is particularly true of common rail injectors, which require very small manufacturing tolerances of just a few microns in the operating play between the various moving parts. However, machining variations during manufacturing, load losses between moving parts, and magnetic variances causes each injector to be slightly different. Because of this, fuelling variations can reach up to 5mg/st. With this level of variation, it is not possible to control the engine accurately and efficiently.

To rectify these differences, a C2i/C3i correction code is produced for each individual injector in order to ensure the correct amount of diesel is injected for every injector, enabling the engine to run smoothly and efficiently. This code must then be programed to the ECU so that the vehicle knows the various differences in each injector and can then make the relevant adjustments.

During operation, the profile of the injector changes due to wear, so the ECU performs Minimum Drive Pulse (MDP) updates to keep the injector within tolerances. If the injector varies too far from the coded operating profile, the ECU will send a trouble-code and activate the check engine light. When an injector is repaired, it requires a new code. A non-authorised repairer cannot produce a new code, and must instead re-use the old injector code. The problem with this is that the old code is no longer accurate because the profile of the repaired injector has changed.

If the repairer has input the old injector code, the ECU will be reset to the parameters of the old code, which does not represent the current profile of the injector. This means the ECU may not be able to provide a MDP of a magnitude to sufficiently correct the injector activity. A common misconception is that the ECU can adjust to the profile of the repaired injector. This is incorrect. The ECU can only continue to adjust the MDP based on the old injector code.

Education on how to repair these technologically advanced systems is critical. In fact, it is because of this rapid change in technology, that it is important for garages to ensure they are sourcing from an authorised repair network, like Delphi Diesel Centres. With more than 4,500 locations globally, they have the knowledge and experience to repair the injector correctly first time

Our Delphi Diesel Centre network consists of highly-equipped specialists offering diagnostics, testing and repair of today’s most advanced diesel fuel injection technologies. All work performed is to OE-approved standards and only authorised Centres have the equipment and skills required to generate a new code for an injector after it is repaired. Delphi Diesel Centre technicians are required to attend factory training schools conducted by qualified Delphi instructors and they’ll cover all aspects of diagnosis and product repair.

The technician then checked all of the injector’s backleakage using the Delphi Sealed Rail Kit (YDT278) in order to identify which injectors were not performing to specification, and to confirm correct levels of rail pressure. In this case, it was a fault with one of the injectors, but if low rail pressure was an issue, the technician would have used Delphi’s False Actuator Kit (YDT410) to determine whether or not the pressure was generated mechanically by the pump, or if there was a possible fault with the pump’s Inlet Metering Valve (IMV) or Pressure Control Valve. 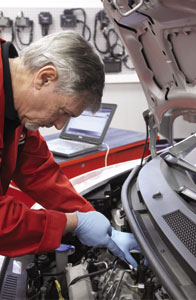 To ensure the damage was not as a result of contaminated fuel, the technician’s next step was to test the fuel within the system with Delphi’s Fuel Analyser. After testing the fuel from the vehicle’s tank, and/or the fuel filter assembly, it was found that the fuel wasn’t contaminated. If the fuel analyser’s report was to show fuel contamination, the technician could use this report to explain the damage, as well as to refute any possible warranty claims.

The Delphi Diesel Centre tested the injectors on a Delphi authorised test bench to confirm which injector was at fault. This included electrically testing the injectors for resistance and insulation failures.

After the injectors had been tested, any that did not pass the authorised test were dismantled, repaired and reassembled in a filtered clean environment. In this case, the one repaired injector was once again put through a complete test procedure on an authorised test bench to produce a new C2i/C3i code, which was printed onto a label and attached to the injector body. 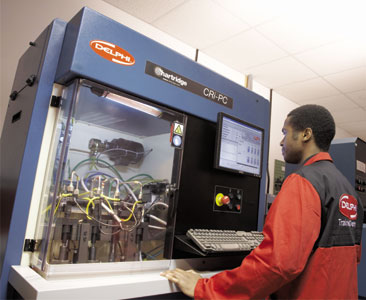 Once the technician received the tested and repaired injectors, he was able to re-fit them to the engine, again ensuring he maintained a high standard of cleanliness at all times. After the injectors were fitted to the engine, the technician utilised the DS diagnostic tool to calibrate the vehicle with the new C2i/C3i code for the repaired injector and to re-check the other three. The final step for the technician was to re-interrogate with the DS diagnostic tool and clear all fault codes to confirm that the fault had been eliminated.