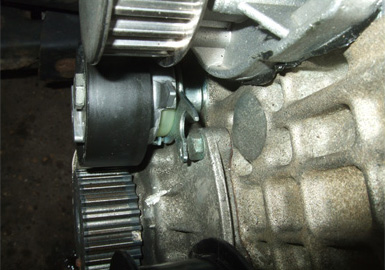 Here we see overlap of the backplate prong

When a motor factor’s report from Manchester suggested that a tensioner bolt had ‘sheared’ and caused major engine damage, the Gates Inspector was invited to assess the situation. The engine in this case features one main belt drive and one secondary smaller belt drive.

Bolt design
A tensioner bolt is designed to clamp the drive belt tensioner in position. The torque setting has to be precise because it is not designed to bear a lateral load. The following are common causes of ‘shearing’:

In the event that any of these things occur, at some time in the future the bolt will fail. The only question is when?

Statistically speaking, the most common problems with tensioner bolts arise as a result of incorrect torque. If the setting is too low, or too high, the clamping force is compromised. In each case, some – or all – of the lateral load will be transferred from the tensioner to the bolt. However, the mechanic at the scene provided assurance that the correct torque had been applied.

At the scene
The Gates Inspector confirmed that the tensioner bolt had sheared. It was also clear that the engine had suffered a catastrophic failure. Two questions subsequently had to be answered:

1. Did the bolt failure instigate the sequence of events that caused the engine failure?
2. Was the failure of the bolt a symptom of the problem or its cause?

A thorough inspection of the drive belt system is always the initial starting point. 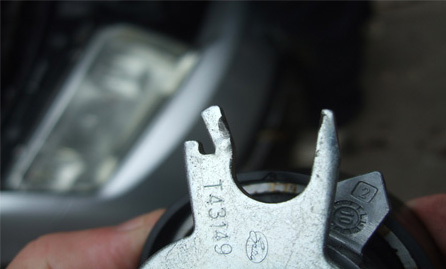 Here we can see unusual wear on the prong

Reconstruction
The backplate on this model resembles a twopronged fork. These sit on either side of the 10mm bolt. Close examination of the backplate showed that it was bent forward and had suffered from some kind of abrasive action. The marks – apparently caused by wear – were unusual. The sheared bolt was removed and a replacement was sourced in order to make a comparison. The damaged tensioner was also offered up to the engine. A reconstruction of the installation procedure indicated that it was possible to mount the backplate of the tensioner incorrectly, even though the pointer was in the correct position. Moreover, the marks on the backplate could be reproduced if one of the prongs was seated on top of the bolt.

In such a position, under load, the tensioner would malfunction and cause the cursor to come into contact with the end stop. As a consequence, the backplate would rotate and this movement would drop the incorrectly-seated prong into the correct position, to the side of the bolt. However, by this stage, the damage had already been done.

Countdown to destruction
The sequence of events had become clear. Because the prong had sat on top of the bolt, the tensioner had been forced forwards. Contact between the cursor and the end stop caused the backplate to rotate and this had repositioned the prong into the correct position. As a consequence the tensioner moved backwards, releasing the clamping load. The load from the belt was redirected on to the bolt, causing it to shear. Once this occurred, the tensioner would have dropped out of the drive system and the drive belt would have gone slack. With no tension in the belt, the valve timing would have been compromised, piston to valve contact would have taken place and by that time, destruction of the engine was inevitable.

Conclusion
Failures like those listed usually take place at some time after a scheduled belt replacement procedure. As in this case, they are more likely to be the result of installation error. The correct torque must always be applied, however, no amount of torque can compensate for an incorrectly located backplate. That’s why it’s imperative that you always check the position of the backplate after installation.