ECOBAT charts the complex process behind the modern car battery and seeks to clear up any remaining confusion.

In terms of the aftermarket, batteries have historically been a relatively simple component to replace within a generally uncomplicated electrical system. Although things began to change slightly when a 12-volt power supply had to be provided during battery removal and installation, initially in order to save radio codes and then the information contained in the vehicle’s electronic control units (ECU), the real game changer has been the introduction of start/stop technology.

In order to support a start/stop system, which, as its name suggests, requires the battery to make multiple engine starts in the course of a single journey, there had to be a fundamental shift in battery technology. Hence the development of first, AGM (absorbent glass mat) and later, EFB (enhanced flooded battery) designs.

Although these developments are now commonplace within the industry, what is clear from research conducted by ECOBAT Battery Technologies is that there is still confusion in the marketplace as to the process and tools that might be required to change the battery in a start/stop equipped vehicle, as well as a failure to recognise that it requires a specific battery.

Another factor is the need for technicians to use a battery validation tool to ensure the new AGM/EFB battery is correctly assimilated into the vehicle’s battery management system (BMS). This vital element is an important step that is often overlooked and means that even if the battery is of the appropriate technology and correct specification, incorrect validation will result in the wrong charge algorithms being applied to the new battery via the BMS, which will considerably reduce its service life.

A significant additional benefit to workshops fitting start/stop replacements is that with each installation they are selling a battery with a greater profit margin. On top of this, because they are fitting a battery of the correct specification for the application, rather than a familiar, but ultimately inappropriate SLI version, customer satisfaction increases and warranty claims are reduced accordingly. 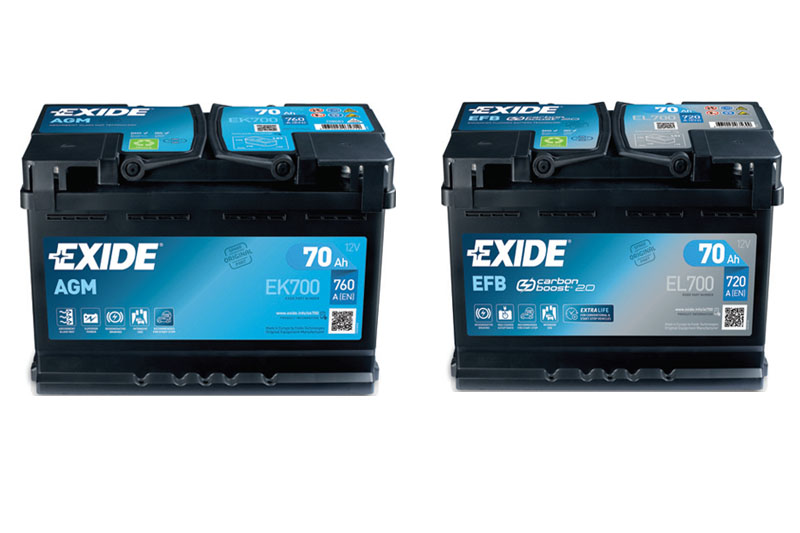 Solutions for the aftermarket Exide’s next generation light-vehicle batteries, which are under continuous development for its OE business with vehicle manufacturers globally, are specifically optimised for the most advanced powertrain technologies currently in the market and for those coming in the future.

Initially developed for its start/stop OE batteries, Carbon Boost is Exide’s smart electrochemical solution for longer battery life and uses carbon additives on the surface of the negative plates to increase the speed at which the sulphate particles dissolve. It is the only battery manufacturer to adopt this approach, which leads to faster recharging, protection from sulphation, and less stratification.

Continuous investments in R&D, tighter emissions regulations and the increasing demands from the VMs in regard to charge acceptance and energy availability, all led to the development of Carbon Boost 2.0, which uses improved carbon additives, combining an optimised surface structure with significantly better conductivity. This enables a superior current flow within the battery, resulting in unmatched charge acceptance. It also helps to dissolve the lead sulphate deposits that usually consolidate on a battery’s discharged negative plates, reducing its ability to charge back efficiently.

Exide’s OE AGM batteries were first to market in 2004 and feature LifeGrid technology, which is perfect for advanced start/stop systems where the battery needs to be quickly recharged through the energy provided by the regenerative braking system.

First invented by Exide in 2008, EFB batteries have come to play an increasingly crucial role for VMs in order to reduce fuel consumption and emissions.

0 0
Previous : Rise in second-hand car prices
Next : How the connected world impacts the aftermarket