Modern day antifreeze and coolant solutions can be identified in various ways, with the main distinguishable differences being that of colour or by coolant associated manufacturer-linked approvals.
In the case of monoethylene glycol-based liquids – such as MPM antifreeze and coolant – the difference between the products can be identified by the products’ performance, and by the additive technology contained within it.

The use of additives
MPM antifreeze (dilutable) contains < 95% glycol, with the remaining 5% made up of additives. This additives percentage basically defines the performance of the antifreeze. The additives may consist of mineral or “OAT” (Organic Additive Technology) additions or, in some cases, combinations of mineral and OAT additives are also available.

Mineral technology
Mineral additives are phosphates, silicates, nitrites and nitrates. The benefit of these is that they coat and form a protective layer to the surfaces of the cooling system. Some minerals are no longer permitted in the manufacturing of modern coolant/antifreeze products, as it was identified that they not only had an impact on human health, but also the environment.

Organic technology
The use of this technology has been heightened as the likes of Ford, GM and VW have moved away from mineral products.
Some of the reasons behind this are based on the identified longevity of component life (e.g. water pumps) and also with the extended maintenance/replacement life of the product reducing the impact on the environment. Unlike a mineral product, the OAT-based product does not form a thick coating layer on the cooling system, which allows the dissipation of heat more efficiently.
However, with the use of sensitive alloys in component manufacturing, there has been a technical challenge identified in using OAT coolants. Due to the high and increased energy density and smaller wall thicknesses of components, manufacturers have had to deal with issues such as micro-cracks forming in cylinder heads. 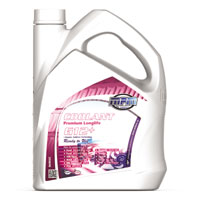 MPM’s coolant and antifreeze range meets the individual application needs with manufacturers’ endorsement. G12 + with the official Volkswagen approval is one example.

Hybrid and lobrid antifreeze and coolant
By re-introducing certain mineral additives to the OAT coolant, manufacturers have identified that they can negate the risk of un-uniformed component expansion that may result in component failures. Therefore individual manufacturer’s coolants and antifreeze specifications vary and products have been developed to best suit the requirements of the individual cooling system of the engine.

One should not forget that technology has greatly improved over the last 5-10 years, and the latest engines can have up to three different independently working cooling systems, all operating within different parameters.

To ensure the efficient operation of these modern engines, the manufacturer has increased the volumes of the coolant/antifreeze quite considerably. For example, the cooling system of a 2005 manufactured engine had a volume of 7 litres, but for modern systems the volume can be 10-15 litres.

One issue that came to light with the introduction of minerals in a silicate-freebased product was the ability for the additives to stabilise and circulate uniformly. MPM supplies lobrid silicate coolants with the use of special additives that help to eradicate this issue.

MPM, along with engine manufacturers, has identified that the coolant/antifreeze used in modern systems has to be produced with the correct additive formulations to ensure the operating efficiency of the engine. As such, many formulations are bespoke to each individual application – much in the same way as modern engine oils.