Spark plugs perform a pivotal role in petrol engine response and represent an increasingly complex electrical set-up. Technicians should take time to remind themselves of some of the visual signals of spark plug problems, as well as their wider symptoms and causes.

A spark plug’s life can be affected by many factors. Dirt, fouled plugs (caused by carbon build-up), breakage and wear can all play a part and the portions of the spark plug that wear over time are the centre and side electrodes. The two main types of wear are:

Oxidised wear – oxidised scale build-up that drops off in places, only to be replaced by further irregular build-up.

You should also remember that failure to correctly install, inspect, clean and re-gap spark plugs can also result in problems, especially as 70% of a plug’s wear is on the firing electrode. A bigger gap will stress the coil pack, causing premature failure and resulting in potentially costly faults. Modified engines also need to be considered to ensure that the correct application is used.

OTHER CAUSES OF SPARK PLUG FAILURE 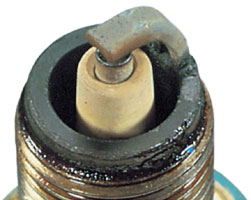 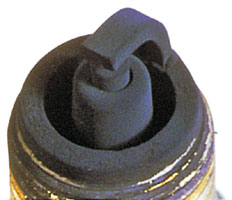 Appearance: Dry, soft black carbon on the insulator and electrodes. 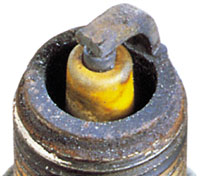 Appearance: Yellow or tan cinder-like deposits or a shiny glaze coating on the spark plug insulator.

Possible causes: Use of petrol with high-lead contents. 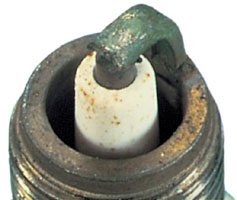 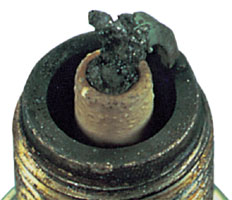 Appearance: A melted or burned centre and/or ground electrode, blistered insulator and aluminium or other metallic deposits on the insulator.

Results: Loss of power then causing damage to the engine.