In the first part of this feature, PICO Technician Steve Smith investigates a 2005 Vauxhall Vectra, the engine of which is (mostly) refusing to start.

The customer reported a clicking noise from under the bonnet when attempting to start the engine (the engine failed to crank).

Verifying the customer complaint is an essential step in the diagnostic process but is also quite often a time-consuming task with no success. On this occasion, the customer’s complaint was verified. The engine failed to crank and there was a clicking noise from the starter motor when we held the ignition key in the crank position. The warning lights in the instrument panel would also flicker in unison with the clicking from the starter motor. When we applied a boost pack to the vehicle battery, the engine would occasionally crank and start as normal, accompanied by a screeching noise from the starter motor.

In contradiction to the above, there were several occasions where the engine would crank and start as normal without support from a battery boost pack (i.e. there was no apparent fault).

With the customer’s complaint verified, we confirmed the Vehicle’s ID and Specification.

Confirmation of specification is of the utmost importance when it comes to diagnosis. Owners often get tempted to modify their vehicle with fashionable accessories that lack the fundamental quality control and engineering that was intended for the vehicle. The customer confirmed that no such accessories had been installed.

How long has the problem been evident?
No previous experience of a non-crank/start event or any engine running problems

When did you first notice the problem?
The symptom occurred when attempting to start the vehicle after it had been standing for over six months (MOT was due).

When do you experience the problem?
When attempting to start the vehicle, once started the engine would continue to run.

Quite often, the customer interview leads to a “probable” diagnosis. My initial thoughts turned to low battery voltage (parasitic drain) or 12 V battery failure since the vehicle has been stationary for several months and applying a booster improves the non-cranking issue.

A basic inspection confirmed no fluid leakages, no visible signs of damage to hoses, connections or wiring harnesses, and no sign of accident repair.

A vehicle scan of all on-board control units revealed several fault codes which were saved then erased:

Instrument cluster
U2105 Communication with engine control unit – No communication

Before diving in, we took a step back and checked for Technical Bulletins. This check is paramount. While this may seem obvious, there are many avenues you can take to obtain free technical bulletins and so-called “known fixes”. I have learned that while the entire description of such obtained data matches the exact symptom you are experiencing, the information obtained may well be for other markets i.e., not applicable to UK specification vehicles. (Please don’t fall into this trap as I have with previous vehicles.)

The action plan was predominately governed by accessibility, probability and cost. We quickly eliminated the battery and charging system as we confirmed them to be OK.

Based on the acquired scan data, you can’t ignore numerous ECUs reporting loss of communication with the Engine ECU. Again, it was tempting to dive into CAN network diagnosis but I felt as though we could be working blind. To understand how such CAN errors could influence cranking, we needed to interpret how the starter motor was controlled and this was where we focused our attention, referring to the relevant technical information.

The cranking circuit relied on the engine ECU to ground pin 85 of the starter motor relay, the diagram from ALLDATA (Fig.1/main image) helped clarify the circuit. This diagram shows:

So, what was causing the starter motor to repeatedly “click” and the engine failing to crank? The Autodata wiring diagram (Fig.2) will assist with the descriptions included in the waveforms, where we caught the failure. 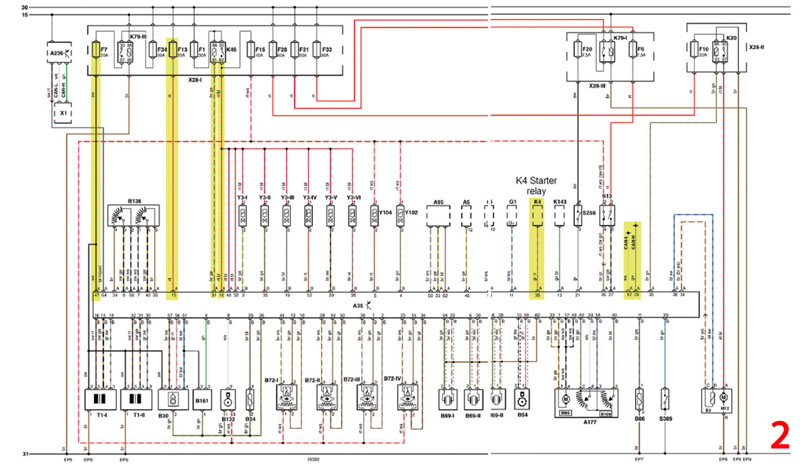 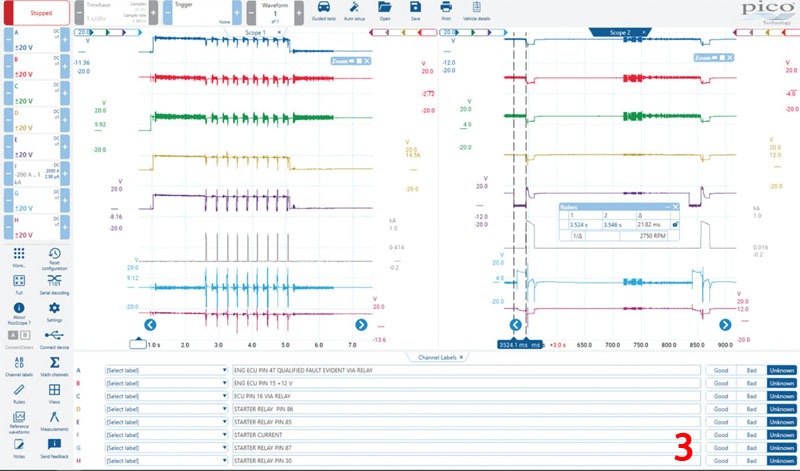 Since we had eight channels to acquire data with, we could eliminate numerous components in one single capture. In Fig.4 we have zoomed in on just one of the “pulsing” events of the starter motor relay. 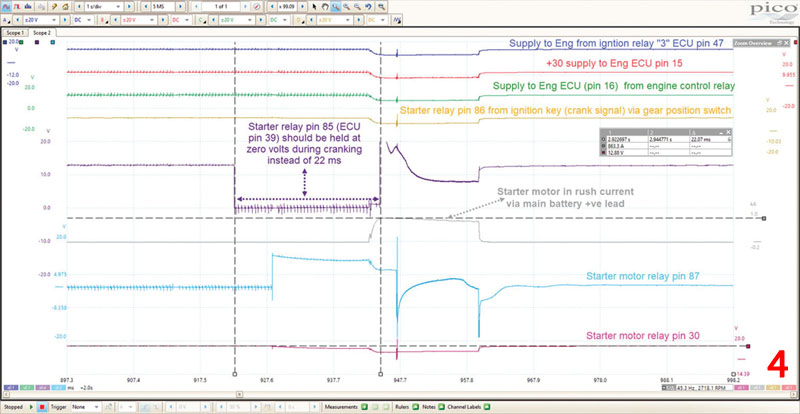 When we referred to the captures and wiring diagrams we could conclude the following:

All in all, a set of worthy test results that allowed our focus to firmly shift to the engine ECU and our numerous CAN codes reporting a loss of communication (we are not working blind). It is always comforting to know the diagnostic path you have chosen is the right one and by this, I mean validation of the test results shown. We knew the starter relay was losing the ground path on terminal 85 and what better way to qualify this scenario than using a bypass test?

While we have tested the ECU power supplies, what about the main ECU grounding?

Given that the engine ECU was bolted to the engine (and in turn acquires an earth path via the mounting bolts), we carried out a volt drop test (on the ground path) to make sure that the ECU was earthed correctly (Fig.5). 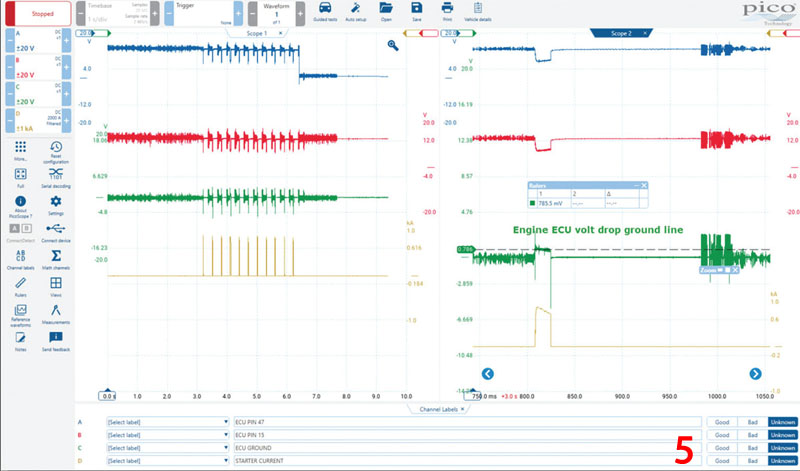 During the starter motor peak inrush (Channel D), we captured an average volt drop of 785 mV. I initially thought that was high, however, the addition of a ground “jump lead” did not change this value. We also knew that the engine ECU was capable of running the engine during the relay bypass test, which removed any doubt surrounding external earthing.

Armed with the confidence generated by the previous tests, we had to test the CAN network at the engine ECU under the fault condition. (Remember multiple ECUs were reporting a loss of communication with the engine ECU.)

Fig.6 captures CAN Lo during the intermittent cranking symptom accompanied by a simultaneous loss of communication to the connected scan tool (monitoring engine ECU live data) and the flickering of the engine MIL. 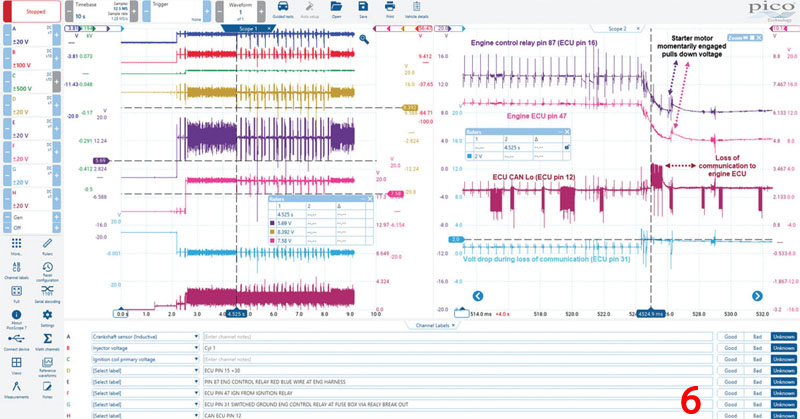 While these voltages appear to remain at an expected level during the “inrush” at our external measurement points, they also supply other actuators (e.g. the throttle motor) via internal electronics in the engine ECU. (Refer to A177 in the Autodata wiring diagram).

It was noted that, periodically, during intermittent cranking, the throttle motor would appear to “whine” which could suggest a cyclic control of the power supply from inside the engine ECU. Note the back EMF present on Channel E which is characteristic of stop/start motor assemblies (think of inductive spikes from fuel injector coils).

Channel G revealed an increased voltage drop (2V) at ECU pin 31 (which is responsible for grounding the engine control relay), accompanied by some very strange behaviour of our CAN Lo signal on Channel H which appeared to momentarily switch from CAN Lo to CAN Hi! It was at this precise point that communication was lost with the scan tool…

Read next month’s issue to find out what was causing the erratic signals and Steve’s ultimate diagnosis.

0 0
Previous : What to expect from MOTs after COVID-19
Next : IMI outlines MOT challenges