Anthony Pickering explains how his approach to a troublesome Seat Toledo was initially slightly off target, but all came good in the end.

The title may not seem relevant at first glance, but after reading this I promise it will make that little bit more sense. I was asked to investigate a glow plug light flashing, engine MIL and a DPF warning on a Seat Toledo 1.6TDi 2014 plate. According to the customer, the MIL and glow plug light came on first, then after a few miles (and days), the DPF warning also came up on the dash.

First test I performed was to verify the fault, and establish that all three lights were on. The next step was to read the trouble codes stored from a global vehicle scan and report all faults (even the ones that were not tied to the complaint). Fig 1 shows the codes stored within the engine ECU. 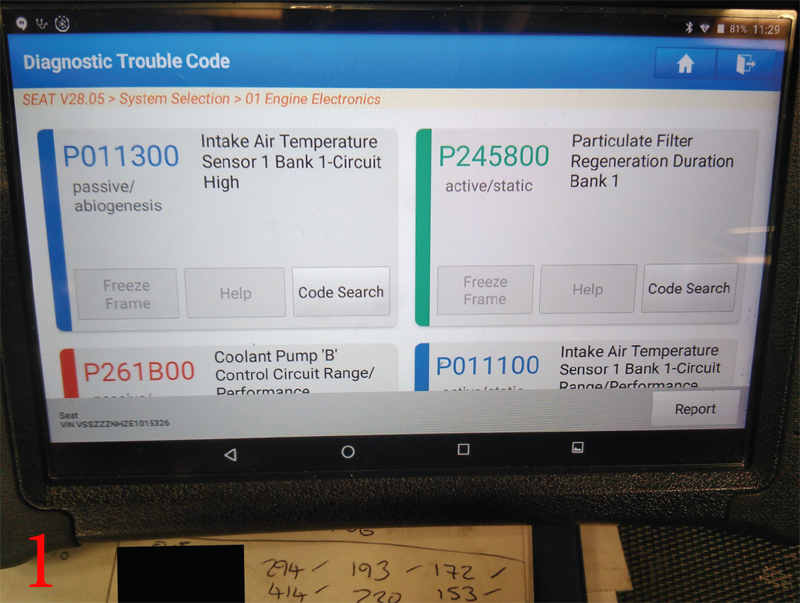 When faced with multiple codes, I like to try and work out which ones are ‘causes’ and which ones are ‘effects’. From these, I decided that if the intake air temperature is outside of a specified range (the ‘cause’ of the issue), then it is highly likely that the DPF is being prevented from regenerating, which may also have some tie-in with a coolant pump running (the effects resulting from the ‘cause’).

This being the initial diagnosis session, my first plan of action was to investigate the live data. On inspection, it registered an intake temperature reading of 21˚C, which seemed plausible, and a DPF loading of around 30%. From this information I knew that the DPF was partially blocked and probably required some form of regeneration – the intake temperature though was OK at present. It was time to look a little deeper.

Looking at a wiring diagram and the component information, I established that the intake temperature sensor was part of the boost sensor. This sensor had four wires, a 5V supply, a ground and two signals.

When I checked the signal voltage on the inlet temperature signal at the sensor, a plausible 1.5V (approx.) was present at the sensor, which was roughly what I expected to see (1 to 2V was the expected output from experience of these sensors. If you’re ever in doubt, test a known good if available). At this point, I could have looked at the engine ECU and checked the voltage, but I decided on a slightly different approach as the ECU was buried (and if I did need to go to the ECU, further charges for investigations would be needed). 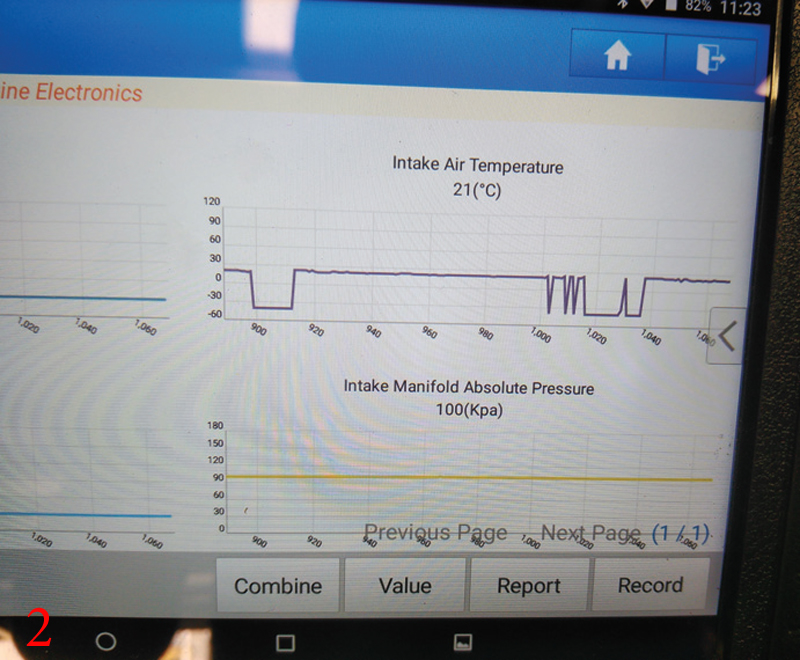 Following the wiring harness, I wriggled a few easy-to-grab points and just below the coolant pump, if I stressed the harness at that area, the signal voltage dropped to 0V on occasions and the live data changed to -40˚C, as shown in Fig 2 and Fig 3. Fig 4 depicts the area I wriggled to make the drops occur. 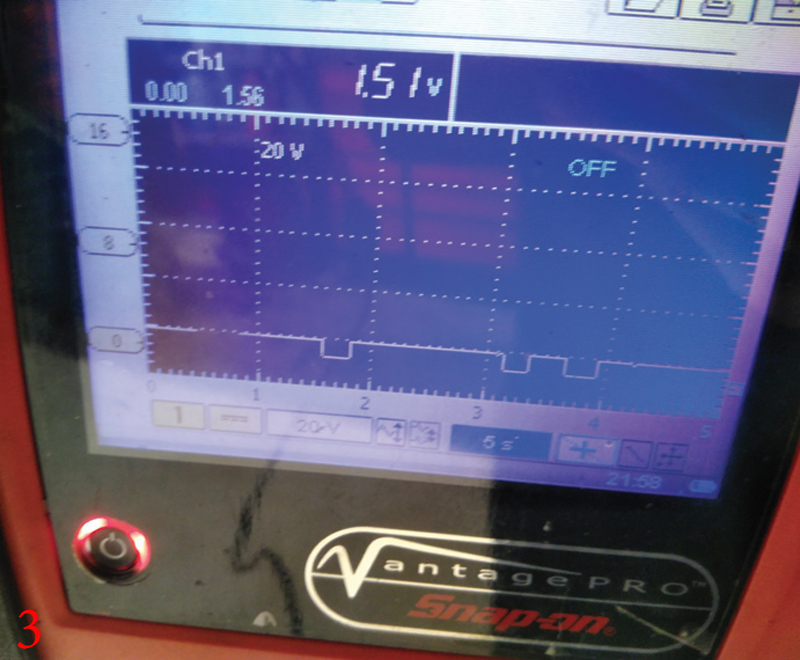 At this point, I knew that the intake temperature code was correct, and the approximate location of the wiring concern. Seeing the voltage drop to 0V, I knew the issue was with the signal wire and not the shared ground. If the ground had a fault, then the signal voltage would have risen (possibly to near 5V). Also, the coolant pump could be heard operating intermittently while creating the fault. 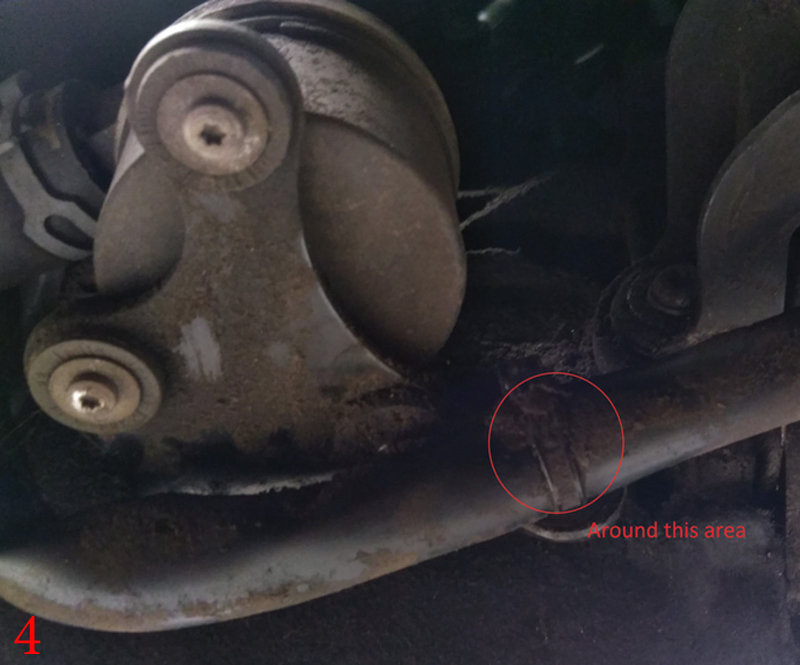 After gaining authorisation for further investigation, I stripped the loom outer cover around the area highlighted. To my disappointment there were no wiring issues visible. Back to the wriggle test. Then, with the harness open, I wriggled the wiring. This showed no issue. Moving to the right, I started getting the drop outs. There was a multiplug just off the gearbox, and after wriggling this, the fault became obvious. The signal wire on the other side of the multiplug was almost broken! This multiplug was not secured very well, so where I was wriggling initially was moving the plug slightly and opening and closing the signal wire (Fig 5). 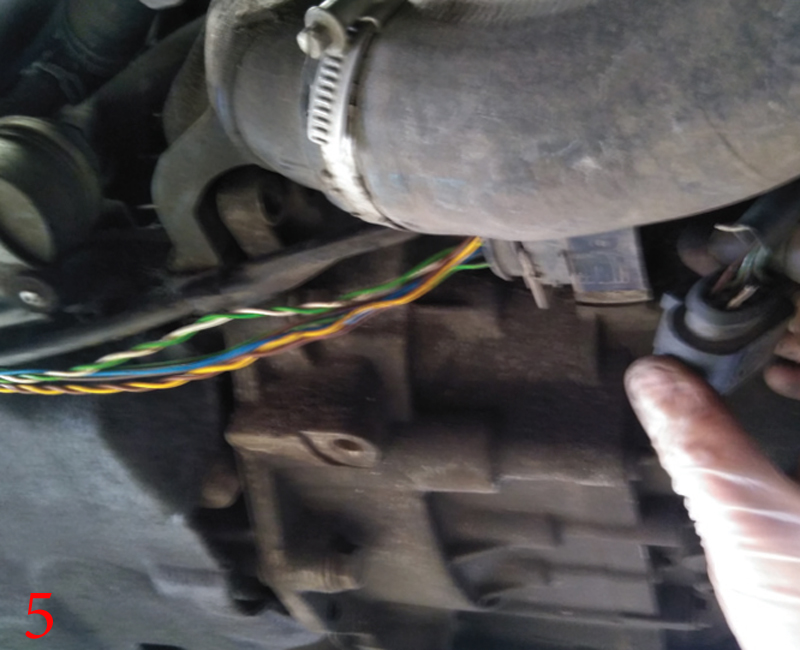 After a few minutes performing wiring repairs to meet manufacturer guidelines and another wriggle test with no drop outs, the intake air temperature and lack of coolant pump operation – the ‘cause’ – had been fixed.

With all the codes erased, none of them returned after a second road test. To sum up, I was in the right area but slightly missed the target in relation to the exact location of the wiring issue with the wriggle test.

0 0 0
Previous : Best of both worlds
Next : How to replace the clutch on a Ford Transit