Scantec Automotive’s Ross Kemp explains how his team came to uncover the culprit of parasitic battery drain on a Mercedes C220 CDi Sport.

We were recently asked to investigate an intermittent parasitic battery drain on a Mercedes C220 CDi Sport. The customer reported that the vehicle could often go for days without issue, whereas on other occasions the battery would drain in a matter of hours. It was also stated that the battery had been replaced three times by other workshops.

Initial basic testing showed a good healthy battery and charging system, and an initial global scan of the vehicle revealed 31 control modules all responding correctly, with a total of 42 fault codes stored.

The number of fault codes wasn’t a surprise here. When the vehicle voltage drops to a critical level (normally about 9V) and depending on whether the vehicle is awake or dormant at the time, differing control modules will shut down or cease to function, and will therefore drop off the network.

Subsequently, this can cause those other modules that are still holding on for dear life to post fault codes not only relating to their own supply voltage, but also relating to missing messages from those modules that have since given up trying to function.

Having a quick scan over the stored faults didn’t shed much light on the issue, and as suspected, most of the faults stored were related to either battery voltage and/or missing CAN network messages. However, one fault stored in the ZGW (central gateway) did spark a little interest – ‘U116000 BUS keep awake unit was detected’.

Now, in most battery drain cases, the first questions I want answered are:

Initial checks showed that the vehicle was correctly shutting down in the expected timeframe and maintained an average drain of approx. 25mA. Therefore, we knew the vehicle could and would shut down correctly if all the conditions were correct for it to do so. We left the vehicle over several hours whilst monitoring minimum and maximum drain and on rechecking, still with approx.

25mA showing, we noticed that at some point the drain had risen to over 6A, confirming the customer’s reported symptoms.

So, as mentioned above, was this issue relevant to the network?

A check against the manufacturer wiring diagrams confirmed that this vehicle utilises six different networks (PT CAN, Telematics, 2 x Interior, Chassis and dynamics CAN). Now, we don’t normally like to use current clamps for battery drain monitoring (due to accuracy and drift issues), however, at 6A we were not overly worried about accuracy at this stage.

We connected up one of our scopes to a current clamp on the main battery negative lead and a further three channels to monitor the PT CAN and the two Interior CAN networks. We locked up the vehicle and noted initially that the vehicle assumed sleep mode correctly with a more than acceptable drain level.

However, after reviewing several hours of data, we could see that sporadically the drain would rise all of a sudden up to approximately 2.8A, four seconds later the two interior CAN networks would then wake up, one second later the current would rise steeply to over 10A, settle back down to 6A, and then within roughly five seconds, the drain and network activity would drop off and resume back to our 25mA or so (Fig 1). 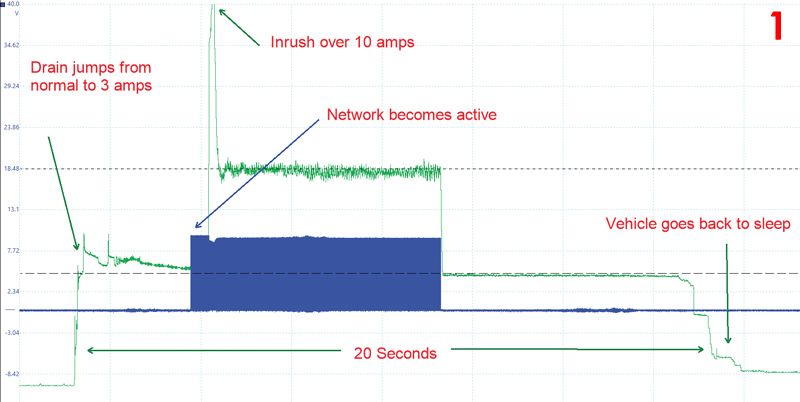 This event was seen several times, always with the same order of events and would last anywhere from 10 to 30 seconds. This made sense with the customer’s original comment (that sometimes they could go days without issue and other times the battery could flatten in a matter of only a few hours) as 6A won’t take long!

Now, looking at the current waveform and seeing the large initial in-rush of current of over 10A, and then dropping to a steady 6A (with what looked like a rotational current signal), we were convinced that this was a motor powering up. The only motor relevant to the interior CAN that we could think of was the heater blower motor.

A quick check of the wiring diagrams suggested that this could only be caused by the air conditioning (A/C) control module; although the heater blower motor module ultimately runs the fan motor assembly (which could have been malfunctioning and causing the motor to run), the fan motor module is a LIN slave and therefore is incapable of waking the interior CAN. However, the A/C control module can wake the interior CAN and does command the fan module as it’s the LIN master.

Wiring diagrams showed only one terminal 30 (battery) fuse for the A/C module in the front SAM fuse box, so we removed the fuse, locked the vehicle back up, and started our recordings again.

We were somewhat surprised to find the exact same symptoms occurring! We decided to take it one step further and this time, as well as monitoring overall battery drain current and interior CAN, we also monitored the current through the heater blower motor and the LIN network at the heater blower module.

When the problem reoccurred, we noted (as expected) that the main current draw seen initially mimicked exactly that of the heater blower motor and that the LIN network became active (Fig 2). This confirmed to us that clearly the A/C module was responsible for this unwanted activity. However, what was really strange was that we had removed the fuse! 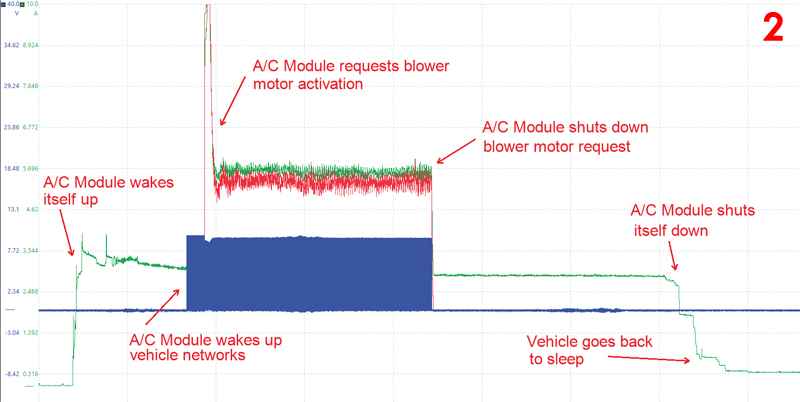 With belt and braces called for, we removed the A/C control module completely from the vehicle and retested the system. This time round, there were no unwanted battery drains and/or no network wakeup events occurred.

With a new A/C control module fitted and programmed to the vehicle with all faults reset and the vehicle left several days, we confirmed there was no further parasitic battery drain present.

But had we missed something? Well, kind of. What we didn’t realise was that there was one wire running between the A/C control module and the front SAM that had absolutely no designation or terminal markings. It was in fact supplying power to the A/C module – unusual for Mercedes to have a power supply not marked as such, but that is why we enjoy what we do. Every day is interesting and presents a multitude of challenges.