We were recently asked to run some diagnostic testing on a vehicle that had been to two other workshops before it came to us. The symptoms reported by the customer were that of a complete engine power shut down when driven under load accompanied by a complete loss of throttle response with faults being logged in the engine relating to MAF and boost.

The vehicle in question was a 2014 VW T5 Transporter with a bi-turbo CAAA engine running the Bosch EDC17 system that meets Euro 5 specification. Now, clearly someone had spent considerable time and expense on this fault, as the list of replaced parts supplied to us included: boost pressure sensor, MAF sensor, fuel pressure sensor, fuel pressure regulator, HP fuel pump including volume control valve, recon turbo, and all four injectors. The ECU had also been sent away for bench testing with no faults found and software updated to the latest calibration.

As always, we carried out a global systems fault analysis and noted two faults logged in the engine’s fault memory relating to MAF sensor plausibility and boost pressure control. Once documented, all faults were deleted and the system rechecked to confirm statically; no faults were present and the engine would rev cleanly with no obvious issues – however, the system utilises a static rev limiter.

Results from the road test

When road testing, it was clear to see that the moment the power demand was increased and the engine speed increased (much beyond 2,500rpm) that the engine would become harsh sounding for a split second and then all power would be lost. No amount of throttle pedal action would bring it back and the engine speed would eventually drop back to idle and all symptoms would disappear.

Retesting for DTCs confirmed both the original fault codes relating to MAF and boost were stored again. Based on the faults being logged, we were initially interested in monitoring the intake air system and the boost system. However, due to the complete loss of power and the harshness of the engine prior to the power cut, we were also interested in monitoring the fuel system, with a particular focus on whatever was taking place in the fuel rail before, during, and after the cut in power.

Data logging and pressure testing of the intake system confirmed, there appeared to be no physical MAF sensor issues and no intake leaks and/or pressure losses. However, the data did confirm that the MAF and boost readings were lower than expected when the vehicle was driven – but, why?

Initially, several thoughts came to mind here, including possible intake restrictions and exhaust restrictions – did we have a turbo/boost control fault? Most (if not all) of these thoughts were quickly dismissed due to the nature of the fault and the fact that the engine would rev cleanly when static. A quick bypass of the throttle plate and EGR confirmed that faults were still present, so we felt happy to move on to the fuel pressure generation, control, and delivery systems.

Primary supply of fuel was clean and checks after the fuel filter confirmed good pressure and volume from the electric fuel supply pump. Monitoring of the high-pressure system and comparing demanded pressure against actual pressure also showed no fault, even when the engine lost all power. In fact, the high pressure remained constant as demanded, even as the engine completely lost power. I must confess, I actually expected to see a spike in the fuel pressure just purely based on the apparent harsh diesel knock-type symptoms noted just before the engine power drops.

With no intake and/or exhaust system leaks/restrictions, good fuel pressure during the fault event, and the engine completely dying as though it had been switched off, the next question we asked was: Are we losing the injector switching? A quick scope test confirmed that we were not.

As we were no longer questioning the engine’s timing and/or compression at this stage, plus the fact that fuel pressure was correct and injectors were being switched (at the correct time) but the engine was still losing all its power, I had to start questioning the injectors’ ability to deliver the fuel.

However, on more careful inspection, we noticed when rebuilding the return circuit, a small plastic hose joiner in part of the rubber fuel return line from the injectors. Knowledge of the system and quick checks on the VAG parts system (ETKA) confirmed that this fuel return system uses a pressure retention valve in its design, and this was missing/not fitted to this vehicle – in its place was a straight through hose joiner!

The design of the Bosch Piezo injectors fitted to this engine is such that each injector has an internal fuel chamber that is required to be kept full at all times for correct operation of the injector’s delivery. It is the return line’s (leak off) circuit retention valve that achieves this by restricting the return flow and maintaining a constant 10bar pressure. 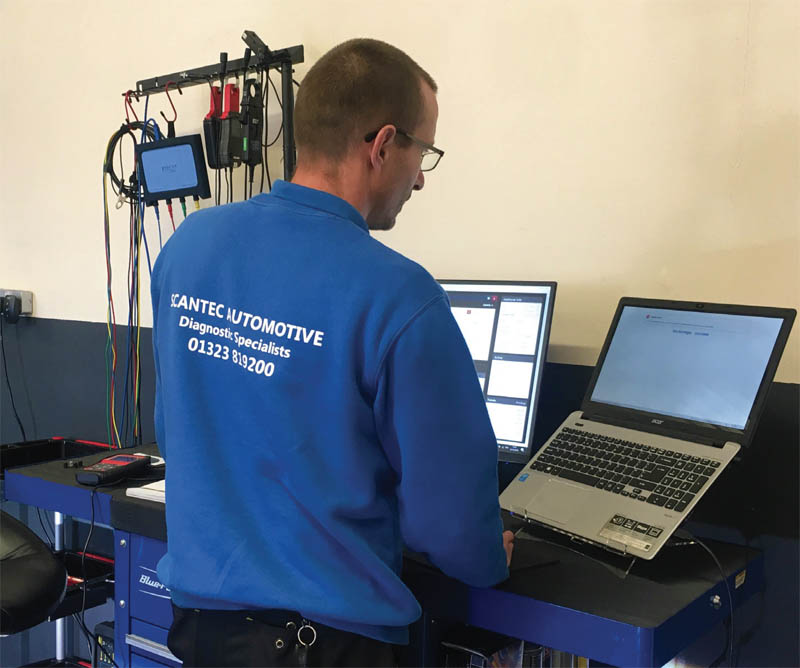 We clearly needed to fit a new injector return line to this vehicle before proceeding, particularly when you consider that the manufacturer states that the engine should not be started with this valve removed as damage to injectors can take place. On fitting a new return line to include the all-important pressure retention valve, I was happy to note that the engine performed as expected, with no loss of power and no faults following road testing.

I do wonder at what point during the firing of the parts cannon, that this little inconspicuous (but all important) component went missing. I guess, if there is a positive to be gained from this, it is the fact that none of the four new injectors appeared to have sustained any damage during the process.

It just goes to show that diagnostics is not all about fault codes and changing parts, it is about having the right knowledge, tools, technical data, and, above all else, applying the correct logic at the correct time.