Pico Technician, Steve Smith, takes PMM readers through the following case study that looks at a known and documented issue surrounding a knocking noise from the steering column area of a BMW.

I will start by first clarifying that this issue was captured at the ‘check for technical bulletins’ stage of the diagnostic process, and so the case was quickly closed as no further diagnosis was required. However, given the nature of the fault, I saw this as a great opportunity to demonstrate how to objectively locate intermittent knocking noises – a process that is usually time consuming and potentially expensive to diagnose. So please read on!

The customer reported a knocking noise that could be felt and heard through the steering column when ‘rocking’ the steering wheel back and forth. Whilst the symptom had been present for approximately six months, it did not affect the performance or handling of the vehicle. The customer also reported an intermittent knocking noise from the suspension when driving at low speeds over speed humps.

Verifying the customer complaint is an essential step in the diagnostic process and luckily, the above steering knock could be replicated with a stationary vehicle. An interesting point to note here is that the knocking noise was evident only with the engine off, i.e. without the intervention of electric power steering (EPS). With the engine running and EPS active, no knocking noise could be produced.

This following video demonstrates the symptom above. Given the vehicle in question is equipped with stop-start, there are times during a typical journey where the EPS is inactive during engine cut (whilst stationary). Any input into the steering wheel during this ‘stand-by’ period would generate a knock prior to engine restart commanded by an EPS ‘load’ request signal (prompted by the movement of the steering wheel). 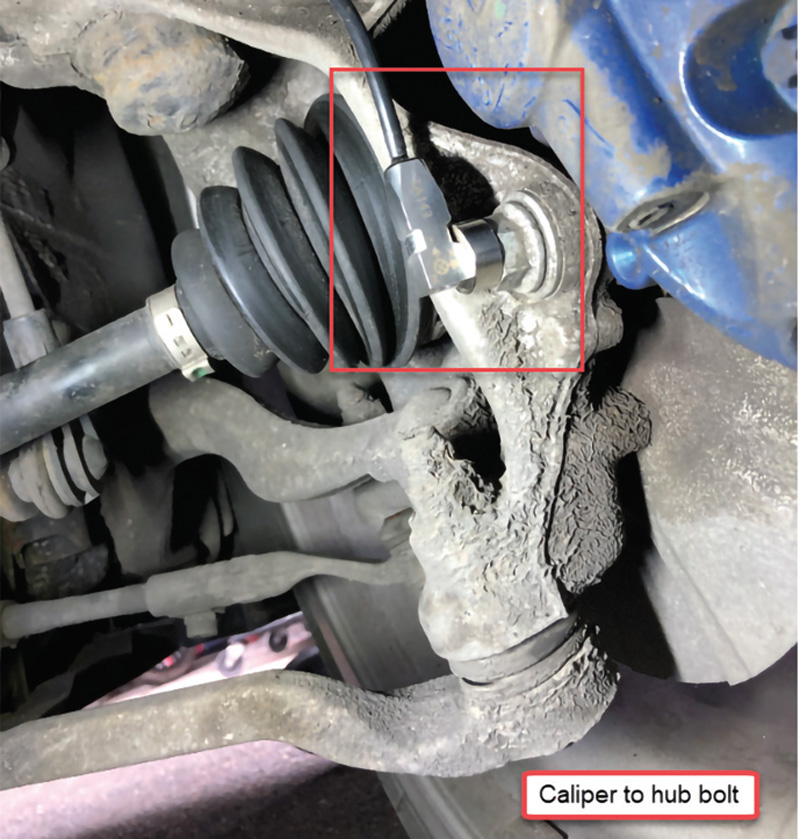 You may well ask, why is this an issue? You could argue it’s simply wear and tear given the mileage of the vehicle. There may be some merit in that question but with complaints of knocking noises surrounding steering, we must err on the side of caution. This may be an early indication of something more sinister such as a worn steering column intermediate shaft universal joint (UJ) or interconnecting spline, both of which have safety implications. Road-testing the vehicle confirmed no drivability issues such as excessive play or tight spots in the steering system and the self-centring action seemed to be functioning as normal.

Regarding the additional customer complaint of an intermittent knocking noise from the suspension over speed humps, occasionally I could produce a similar knock to that felt/heard from the steering column as the right-hand front wheel rides over the speed hump.

My opinion of course is subjective and requires qualification and so the best course of action is to resolve the steering knock and retest over speed humps post steering fix.

With the customer complaint verified, the vehicle’s ID and specification were confirmed. No additional or non-genuine accessories were installed that could influence the performance of the steering or suspension The customer interview highlighted typical tyre replacements and wheel alignments associated with the mileage covered by the vehicle, but no repairs had been carried out to the steering system. The basic inspection confirmed no visible signs of damage to the suspension or steering components, including the alloy wheels and tyres.

Prior to diving in here, taking a step back and checking for technical bulletins (recalls and campaigns etc.) is paramount. This is where we struck gold thanks to a swift Google search accompanied with numerous YouTube videos demonstrating our exact steering concern.

This forum post describes both the fault above, the parts required and the journey taken to resolve the concern, along with a relevant BMW Dealer Bulletin ‘No.22/2018’. Ironically, I could not find this information on two major technical information sites!

For this procedure there is no need to list possible causes based on the information above, however we must bear in mind that we also have an additional complaint of a suspension knock when driving over speed humps. 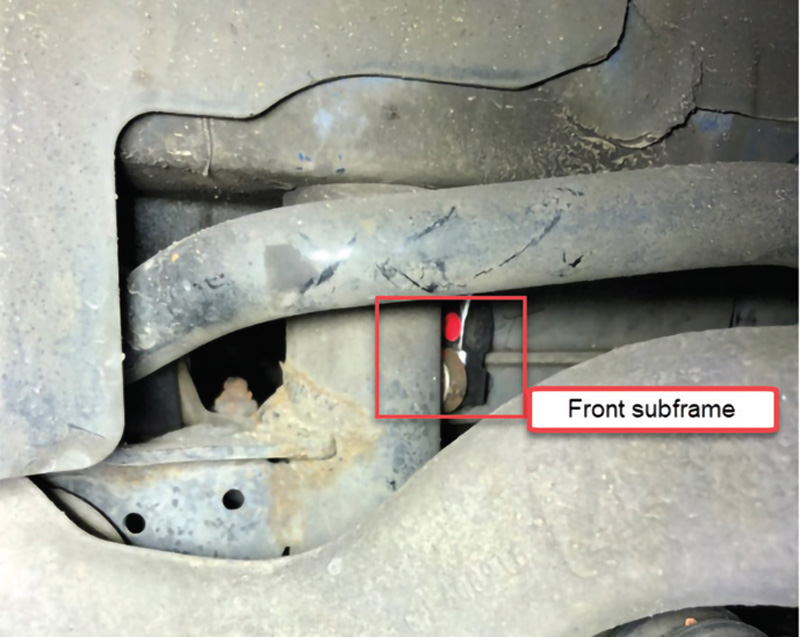 The action plan is predominantly governed by accessibility, probability and cost.

Once again there is no action plan required as we know the fault condition and the repair required, however, why not gather objective data to qualify the fix suggested in the dealer bulletin whilst also trying to capture our intermittent speed hump knock?

To recap what we have learnt so far:

For those lucky enough to own an NVH Advanced kit (with a 4-Channel PicoScope), they have the distinct advantage of placing an accelerometer or microphone at strategic points about the vehicle in order to locate the source of our offending knocking noise.

Now we apply the technique of connecting accelerometers at differing points about the front of the vehicle but inform the NVH software that we have connected microphones. This enables playback within the NVH software to ensure we have indeed captured an offending knock noise, rather than exporting the data and listening to the accelerometers within a media player.

From the first impression of the capture (Fig 1), it would appear we have an excessive response from the RH and LH front suspension as the vehicle rides over the speed humps. This is to be expected as here we witness the characteristic behaviour of the suspension in relation to the chassis (note the roadwheels will rise and fall within the wheel arch). I have placed a marker at 193.22 seconds in the capture to denote the point at which a single knock noise was heard inside the cabin whilst driving over speed humps. 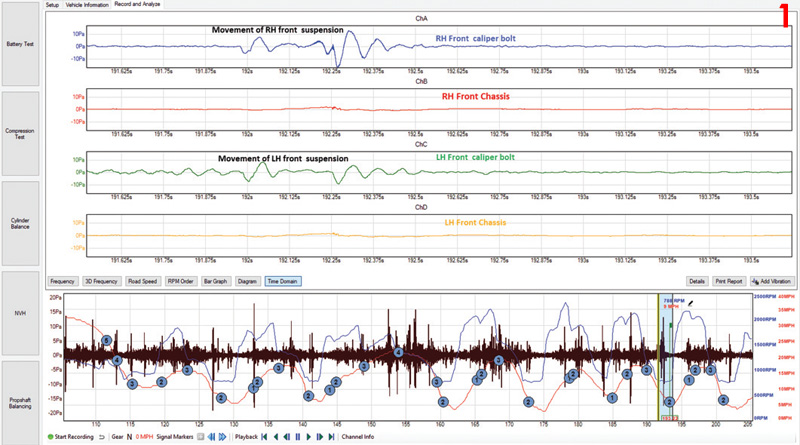 What I would also like to bring your attention is the response of the accelerometers when we hide channels A and C and focus on channels B and D (Fig 2). 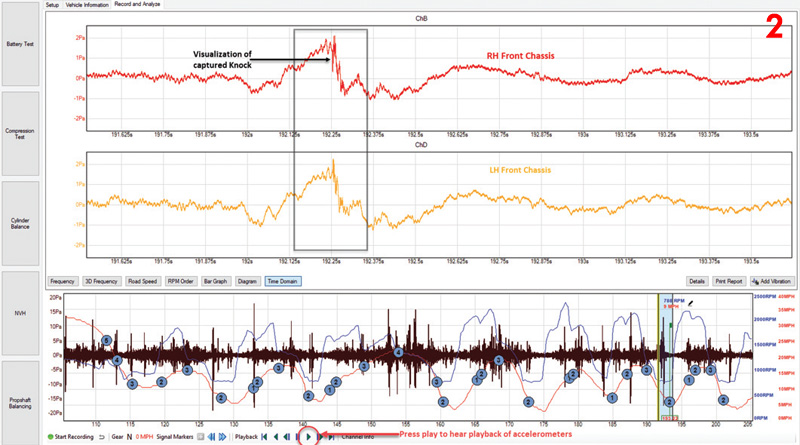 If we playback the audio of the sound recorded by the accelerometers attached to the LH and RH chassis, we have captured the knock which is more prominent in the RH front chassis.

Based on the above, a further road test was carried out to determine the response of the suspension in relation to the chassis when riding over speed humps. Once again, we employed the PicoScope (note that the accelerometer positions remain in the identical locations).

As we can see in Fig 3, the red and yellow channels (B and D respectively) respond almost identically confirming the chassis movement to be equal as the vehicle rides over the speed hump. The black and purple waveforms are math channels derived from subtracting the movement of the suspension from the movement of the chassis: A-B and C-D. What I find interesting here is that the relative suspension motion (of the offending RH side of the vehicle) highlights both an increase in amplitude and frequency relative to the LH side. Could this be poor suspension damping then? 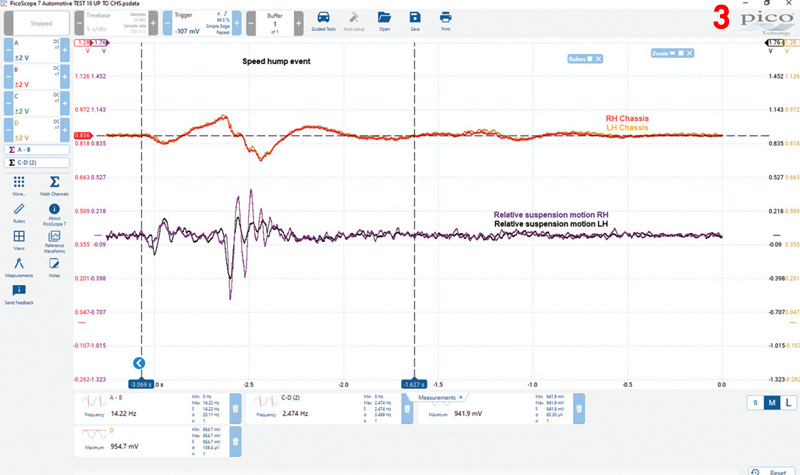 At this stage (if nothing else) we have qualified the following:

Returning to the steering knock

With the vehicle stationary (engine off) and the steering wheel rocked back and forth (EPS inactive), we repositioned the accelerometers and captured the following data using our NVH software (Fig 4). 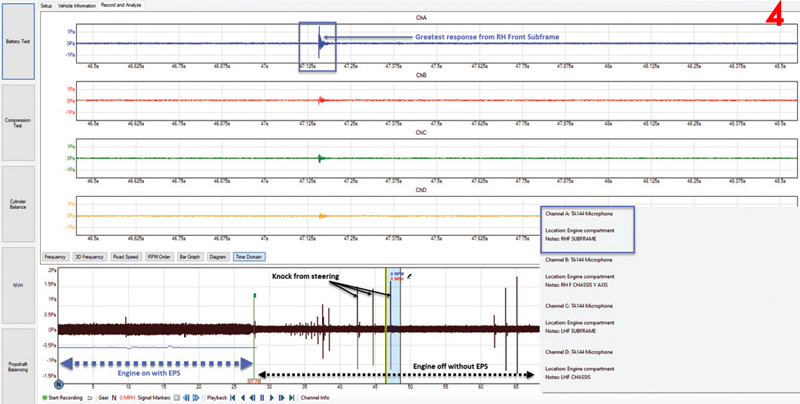 Without doubt, based on amplitude alone the accelerometer connected to the RH front subframe responded to the highest level of energy generated by the knock, however amplitude can be deceiving. The mass to which the accelerometers are attached will differ from one location to another on the vehicle. Imagine how an accelerometer would respond to energy travelling along a thin section of steel plate compared to a thicker section of the vehicle chassis of greater mass. To be fair, in this example, all accelerometers are connected to components of similar mass (chassis and subframe), so the amplitude captured here can be considered a realistic indication of the origin of the knock.

In Fig 5, we conclude that not only was the accelerometer connected to the RH subframe exposed to the highest energy level, it was also the first to respond to the knock that generated this energy and so closer to the offending component. 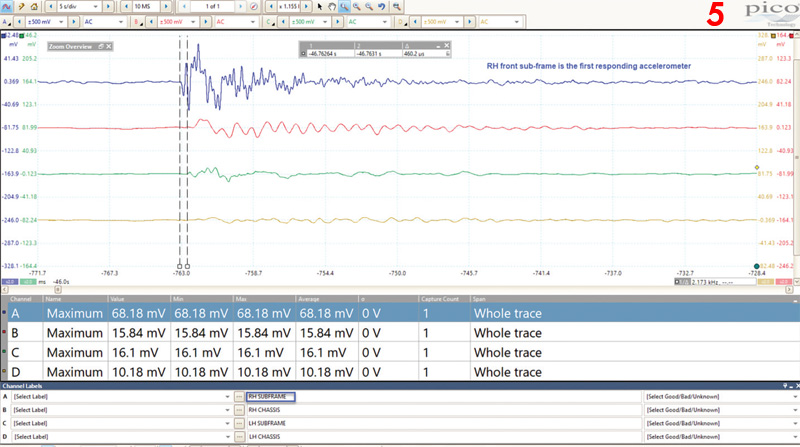 To summarise ‘response time’, we are evaluating the time taken for the energy (generated by the knock) to propagate throughout the vehicle structure.

We must remain mindful of the above characteristics when locating knocking noises; whilst we may be convinced in our mind (subjectively) that a knock originates from the location where it can be heard most prominent, it does not mean to say that is the location of the knock!