In some cases, the rear window wipers work non-stop and/or they do not react to the various settings on the steering column switch. Fault codes are not necessarily stored in the control unit.

Defects in the rear window wiper motor can be caused by water entering via the wiper shaft. Severe oxidation or dampness in the interior can lead to “electromigration” or to a permanent positive connection. In such a case the wiper motors at the rear (as the culprits causing the problem) can first of all be disconnected so that (until the motors are replaced) at least the front windscreen wipers can function properly. In this situation, the rear window wiper motor(s) had to be replaced. The experts at HELLA resolve three tricky issues that garages may encounter this winter. 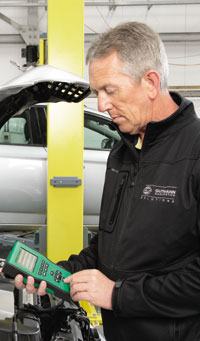 The dipped headlight can fail on this vehicle with the cause often attributed to a defect in the connection between the light switch and the cable plug.

Friction can wear the coating on the contacts between the light switch and the cable plug which can result in increased resistance. In extreme cases, the high temperatures can melt the connection with the plug and the dipped headlight can fail.

The VM has acknowledged the problem and the 16-pole plug on the combi-light switch is now being checked in the garage and replaced where necessary.

In such cases, the coolant level sensor, the lead and the plug are to be checked for any form of damage and also for continuity of electrical current. If the sensor is welded to the expansion tank, then this tank has to be completely renewed.

The manufacturer now offers a modified coolant expansion tank for this purpose, under part number N3H1-15-350L.

Visit Hella’s knowledge portal for garages by logging on to www.hella.com/techworld

0 0
Previous : How to change a clutch on a Volkswagen Crafter
Next : Product Test – Launch X431 Pro