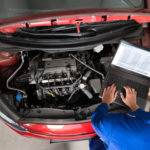 Joshua Jones, a Devon-based Garage Manager for the AA, is back reporting for PMM this month, as he considers the old adage, ‘It’s never the ECU’.

I am sure that many of PMM’s readers are familiar with the countless occasions where you’re left in the workshop alone at 10pm, still trying to get to the bottom of a problem job. If only we could conjure up a large finger – just like in the old National Lottery adverts – pointing to the component at fault, so we can all go home to our beds. Sadly, this is not the case.

Some of you may have heard the phrase, ‘It’s never the ECU’, before. These words ring in my ears when I’m looking for faults where the answer isn’t easy to come by. We get nervous when we start to consider the control unit of a car’s system as faulty. The costs are high if our diagnosis is incorrect.

At this point, we need to be thinking “What are the variables?” and “Is there anything aside from the ECU itself that causes this issue?”. Ultimately, we have to find out what it’s not, to be left with what it is. Only then can we be certain that the call for a replacement control unit is needed.

A case in point

A friend asked me to take a look at a car that had visited his workshop. The vehicle in question had been purchased by the owner a month prior to me seeing it and she’d been experiencing intermittent issues ever since. Reading between the lines, I’d guessed that the fault existed before the change of ownership.

The problem was described to me as: “The car starts and runs fine, and sometimes will do so for days on end without any signs of a hitch. Then, randomly, it will begin misfiring, sometimes accompanied by a flashing warning lamp (EML) and sometimes not”.

When the car came to me, it seemed to be running well, so I decided the first step was to take a road test. I tend to opt for a ‘back door diagnosis attempt’ where possible. My time as a patrol has taught me to start with the basics, beginning with a good visual inspection of the engine bay. I prefer the use of an oscilloscope to obtain real time traces, as opposed to looking at processed data from an engine control unit, especially if I’m wary of substituted values.

This particular engine bay looked OK, so it was time for a test drive. I drove the car for about ten miles in a variety of different driving conditions in order to replicate the reported fault. It seemed to drive fine, until the last mile, when I encountered a dead misfire, with no EML illumination at all, even after driving the half mile back to the workshop on three cylinders.

On my return, I was reluctant to switch the engine off straight away, so I reached for my stethoscope to see if I could hear a deactivated fuel injector to identify which cylinder we were dealing with. No solenoid operation was audible from cylinder 3, so now I knew two things: a) by leaving the car running, I wasn’t causing any immediate damage to the exhaust system; and b) I had a diagnostic path to follow, as opposed to cycling the ignition and restarting the vehicle, as I had a feeling the misfire would stop should I do so. Why? Because of the lack of illumination from the EML.

I knew already that this management system was EOBD compliant, so I could assume that it was programmed to sense and report a dead misfire to the driver using the warning lamp. I knew the lamp circuit was operational, as I had checked on initial start- up that the lamp was there.

Next was to confirm ignition operation on that cylinder. Again, no scan tool was required. I temporarily removed a vacuum line connected to the plenum and introduced a small amount of ether into the inlet charge. Sure enough, the engine briefly changed note and the dead cylinder restarted for a fraction of a second. This was good enough for me to confirm spark operation.

At this point I realised that removal of the vac line may trigger a DTC to be set. However, I was fairly confident that I’d be able to deal with that further down the line with the scan tool. I now needed to confirm why this injector wasn’t operating, so reached for the oscilloscope.

The first thing to do was a basic check. By removing the multi-plug from the injector, and fitting a breakout box in between the multi-plug and the terminal on the unit itself, I checked for a correct supply voltage and for any switching process from the ECU. I used the scope purely as a window into the car’s inner workings, much like a doctor uses one for the electrical signals inside our bodies.

Looking through the window is only valuable if you have the knowledge to understand the view through it! If my doctor showed me my ECG and asked me to interpret it, I wouldn’t have a clue. Similarly, to diagnose the problem with a fuel injection system, it is necessary to understand its basic nature. That way you can check individual systems for correct operation, understand the relationships between them, and then write them off as causes of a fault.

Using this theory, I obtained traces from the two fuel injector wires on cylinder 3. One trace, showing system voltage at both terminals, confirmed good supply voltage and injector solenoid windings integrity while the engine was running. The other, with the injector disconnected, again showed good supply voltage, and on the other wire, a steady voltage of 3.6V, which I believed to be a ‘bias’ voltage.

At this point, I thought this fuel injector was likely (pending confirmation that the 3.6V is bias voltage and not any kind of wiring fault) not firing because the control unit wasn’t giving the command. I was now ready to switch off the car and restart, to see if the fueling for the cylinder came back online. It did – as soon as the engine kicked back into life, it was on all four. A quick recheck at the breakout box confirmed good control from the ECU to the injector.

Was it the ECU?

There was only one thing left to figure out: why would the ECU cut the fueling to cylinder 3? Now I began to question the integrity of the ECU, since it had cut the fueling to an injector and not illuminated the EML. Yes there are DTCs that can be set where EML illumination is not required, but a dead misfire surely isn’t one of them.

Following up, I used a scan tool to check for any codes. First, I used the EOBD protocol to check for any relevant generic codes, but none were stored. There were no relevant codes in the manufacturer program within the ECU and the only stored code was: “P1150 Lack Of HO2S21 Switch – Adaptive Fuel At Limit”. But surely this would have been triggered by the fact there was no fuel delivery into one of the cylinders?

A clear logic problem was being shown by the fact that fueling was randomly being cut, with no warning, to the vehicle driver. Accessing the ECU live data stream function, I could confirm that the parameter ‘malfunction lamp activated’, was showing as ‘not activated’, so I knew not to chase a communication error or an ignition fault. On this basis I made the call and, sure enough, a remanufactured unit was ordered and coded to the vehicle off-site before being supplied to us.

After keeping the car on test for 48 hours, I confirmed that no more symptoms had occurred, but asked the garage to request that the customer inform us of any recurrence. A month later, the car went in for its MOT and no further problems were reported.

Over the years that I’ve been working in the trade, I’ve found a correlation between the frequency of ECU internal faults and the unit itself being bolted directly to the engine. This method would have its benefits in terms of modular assembly, but I think the constant vibrations and temperature fluctuations seem to have an effect.

When certain parts of an ECU fail, it’s not always possible to individually test them, as automotive technicians aren’t all trained to assess or evaluate faults within PCBs. The only real surefire way to get close to a diagnosis is to be able to analyse variables that could cause a fault, and know the way the individual components of an engine management system work. This way you can recognise when components are not working and rule out the other potential causes so that you end up being left with just one.