DPFs are constructed from porous ceramic materials and consist of a honeycomb of numerous small channels, which are closed at alternate ends. The exhaust gas enters the DPF through the inlet channels at one end and is then forced through the porous walls of the channels before emerging from the outlet channels. As it passes through the channel walls, the particulate matter (PM) is trapped.

PM is a complex mixture of small particles and droplets which are usually considered as two main components – soot and ash.

Soot is produced by all diesel vehicles and consists of small particles of carbon. This soot can be removed by a process known as ‘regeneration’. However, vehicles that operate in city centres with lots of stop-start driving do not regenerate their DPFs very effectively, which can lead to premature soot blockages and, in some cases, even a forced regeneration will fail due to over capacity. 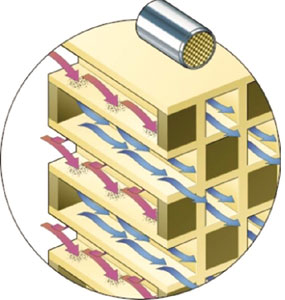 You’ll regularly hear people talking about soot blockages, but ash rarely seems to get a mention. Ash, instead, accumulates over time and shouldn’t be ignored. It needs, however, to be periodically and physically removed, just like the ash found in your log fire.

Ash is a standard by-product of the combustion process that takes place in the engine, the main culprits being calcium from the engine oil and sulphur from diesel. However, unlike soot, the ash that accumulates in filters can’t be burned off by a simple regeneration process. After a certain mileage (typically in excess of 80,000 miles), the filter will become clogged with ash and, even if you carry out a forced regen, ash will still be present.

This means that the vast numbers of cars fitted with DPFs four or five years ago are entering a stage where they’re becoming blocked because of ash accumulation.

You may hear of examples where a forced regen has been carried out, only to find the customer returning after a few days or weeks with the same issue. In most cases, this will be the result of ash accumulation.

If the vehicle’s ash accumulation is high, then the OBD system will register an increase in backpressure on the DPF. As a result, the OBD will trigger a regeneration in the DPF (as if it were a normal soot blockage). These regenerations will become more frequent as the backpressure continues to build up over time and eventually the vehicle may enter limp-home mode.

By assessing the mileage and information gathered by the OBD it should be possible to determine whether a DPF is blocked with soot (for which a forced regeneration would be sufficient) or ash (in which case the DPF requires removal and cleaning or replacement).

Until recently DPF refurbishment for cars (or ‘ash cleaning’) was not very widely available. However, in the truck and bus industry, DPF refurbishment and testing has been established for some time because these vehicles cover larger mileages and ash cleaning needs to be performed more regularly.

Ceramex has been refurbishing DPFs for over 15 years, cleaning over 100,000 filters in the process. The Xpurge® patented process used by the company is tried and tested and has been heavily scrutinised by OEMs, prior to being accepted as their preferred service provider. With its technology and experience proving so successful in the bus/truck industry, it’s no surprise then that Ceramex has now entered the passenger car sector.

Xpurge® process – how does it work?

The filters are cleaned in a fully automated Xpurge unit. The filter is sealed and fluids injected at pre-set pressures. The patented method forces the accumulated ash and particulate matter out of the filter, cleaning throughout the filter structure. Not only does the Xpurge process clean filters, it restores them to ‘as-new’ levels of cleanliness. All filters are inspected prior to refurbishment and come complete with an inspection report showing airflow measurements before/after cleaning along with weight removed.

In order to achieve a professional refurbishing service the DPF is sent to Ceramex and returned within 3-4 days. The whole refurbishment service costs significantly less than an OEM replacement and is available through selected leading distributors.