For many of us, the technology associated with the leaf spring is from another, older age. Associated with agricultural vehicles and the dawn of motoring, the idea of using this type of spring in technology utilised in modern vehicle suspension systems seems archaic in the extreme.
And yet, the manufacturers still insist on utilising them for commercial vehicles and, most commonly seen in independent passenger car workshops, on the many models of 4×4 pick-up.

Why is this so? Well primarily, the leaf spring offers the opportunity to provide strong, durable, cost-effective springing for the rear of the truck without the load space compromises that would inevitably occur if a coil spring suspension turret were employed.
While the trucks themselves have got bigger with all of the capacity and comforts of cars, the manufacturers have not been allowed to lose sight of the truck’s core capabilities – load carrying, towing ability and off-road competency. If a pick-up is not capable of carrying a tonne load on a standard euro-pallet while towing a laden trailer onto a building site, it is not in the game.
The impact on the humble leaf spring, when used on the current generation of pickups, is simple – they’re being asked to do a lot more work. The consequence is higher levels of wear. To work effectively the spring needs to be able to move on its mounts; as it compresses the spring length increases. The front mount is fixed, so the rear mount has to move through a mount known as a ‘shackle’.

The bush plays an important role in controlling the movement in the springs’ ability to extend and contract and, if necessary, twist under load. If the bush restricts the shackle’s movement then ride quality suffers and repair rates increase.
When the bush allows too much axial movement the laden spring will twist as it moves over an uneven surface – both on and off-road – putting excess load on the front mounting bolts, the pins on the rear shackles, U-bolts and the individual leaves themselves. This leads to ‘creaky and crashy’ ride quality and handling stability as well as breakages.

How can you extend the life of the spring?
The life of the spring can be extended by replacing the standard rubber bushes with SuperPro polyurethane bushes, and employing an enhanced design of shackle that allows lubrication of the pins and bushes at normal service time.

The key properties of the SuperPro bushes include high levels of resilience, coupled with a free pivoting action. Fitting these, along with a new shackle (which includes a greasing gallery at the centre of the pin) will contribute to a better controlled spring mount (front and rear) and the free extension of the spring as the suspension extends and contracts.

The new shackle and bushes are refitted

To complete this job in the workshop is quite straightforward. Using an innovative puller from a trusted tool supplier (in this case we’ve used the Sykes Pickavant 8780000 Puller Kit) it is possible to replace the bushes and shackles on both springs in a relatively short time, as the springs do not have to be removed from the truck.
On the Isuzu D-Max featured here, the job was completed in under 1 hour.

The resulting improvements included an increased life of the springs and shackles as well as enhanced vehicle ride quality and handling.
This is a useful upgrade to offer alongside a new spring and we recommend that you check the condition of bushes and shackles at each service as early diagnosis and replacement could substantially increase the life of the spring. 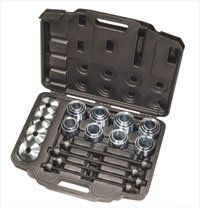