CHAIN DRIVES OR HOT OIL DRIVES: WHICH ONE?

Gates has been awarded contracts to develop hot oil drive belt programmes from two major OE manufacturers. Both programmes involve engines that will be mass-produced in high volumes. Reducing belt width, while retaining belt strength, tooth modulus and dynamic control of the engine are among the important design criteria that Gates engineers will be working towards.
As one of the world’s leading manufacturers of belts and tensioners, Gates is well placed to deliver the technology that encases drive belts inside engines – immersed in hot engine oil – rather than positioning them outside, in dry engine compartments as they are now.
“OE manufacturers are always considering whether to go to belt drives, or chain drives. The other consideration is whether to move to hot oil belts or design around traditional dry belt technology. Designs today seem to be coming down to a choice between chain drives or hot oil drives inside the engine,” says Gates OE Synchronous Chief Engineer Nigel Blunsden.
Improvements in engine design are key OE manufacturer responses to Governments around the world ensuring that the car engines of the future are not only cleaner but consume less fuel. 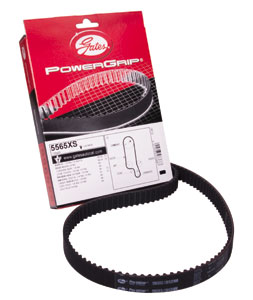 As any good mechanic will know, contamination of a dry belt by external environmental conditions such as water, or dust may lead to drive system failure. So one of the major challenges in making hot oil technology work is to understand the way belts will react to the oils and other chemicals under pressure, once inside the hot and hostile engine environments of the future.
A lot of time has been spent assessing the way the various oils and chemicals perform, react and degrade over time. Mapping these changes – and the blow back gases generated in use and during degradation – is a vital part of the hot oil design process.
The belt has to withstand a continuous assault by all the different types of oils and additives that can be used in engines in a wide range of operating conditions, temperatures and different environments all over the world. The properties of the belts must therefore be able to withstand the worst-case scenario.

When it comes to compact engines for the future, small is beautiful, three cylinders is king and power is everything – provided exhaust emissions and average fuel consumption levels meet new low targets. 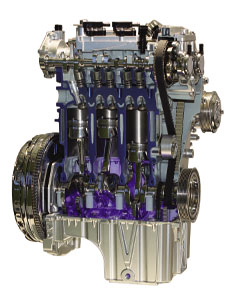 Noise levels are important too, and independent studies – notably by the respected Aachen-based agency FEV – have shown how belts tend to operate more quietly than chains. This also appears to be true within hot oil environments, which is increasingly many OE manufacturers’ choice for drive systems of the future. Hot oil is favoured for a number of reasons, including:

The latest compact engines take up less space and weigh significantly less than previous models. Compact engines of the future will be much smaller. Indeed, a production engine in service, complete with hot oil belt technology, has a footprint no larger than an A4 sheet of paper.

Hot oil drive belt systems are planned for whole life cycles of between 150,000 miles (240,000km) and 200,000 miles (320,000km) and/or 15 years. They will also be very low maintenance and that’s a massive transformation as far as the aftermarket is concerned:
“Ten years ago, we were designing belts systems with a change period of 160,000 km and/or 10 years. You knew that at this life time, the drive belt had to be replaced. In Europe, an expected 240,000 km (15 year) life cycle, is just about the lifetime of the vehicle,” says Gates.
Some aftermarket maintenance is likely, but by comparison with levels today, there will be a reduction. There will be production spinsoffs that benefit the aftermarket production line and that’s another advantage for any supplier with close ties to OE manufacturers.

0 0
Previous : How to change a clutch on a Vauxhall Vivaro
Next : How to avoid repeat problems fitting DPF replacements