Petrol and diesel engines have always been very different animals. Diesel engines are renowned for good lowend torque and petrol engines for high revving, long-legged acceleration, but over the years these differences have become less obvious.

The window rattling of the diesel has been all but eradicated by high pressure common-rail injection and the refinement of the petrol engines’ valve timing mechanism has improved power output and flexibility. 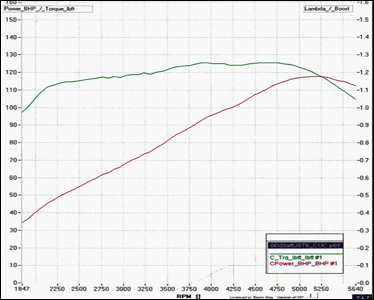 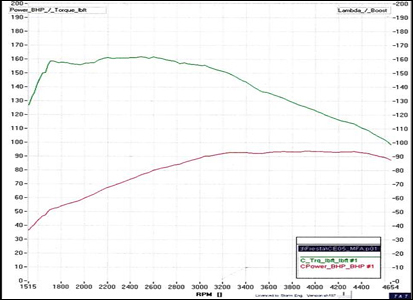 The most obvious difference is maximum torque. The diesel engine produces maximum torque at around 2,000rpm whereas the petrol engine does this at over 4,000rpm. As you can imagine this will give a very a very different driving experience and performance; the initial surge given by the diesel engine is followed by sharp reduction in engine torque which encourages the driver into a gear change. The petrol engine however produces a relatively flat torque curve which gives a continuous long pull feel to its acceleration. So why is this?

Petrol engines are lighter and with lower cylinder pressures. They produce less torque but gain their superior power by producing it faster. Modern engine design allow engines to
breathe, even at high engine speeds.

The power/torque graph (below) is from a naturally aspirated Honda 2 litre type R. As you can see the torque curve is long and relatively flat, amongst other things due to variable valve lift and timing. 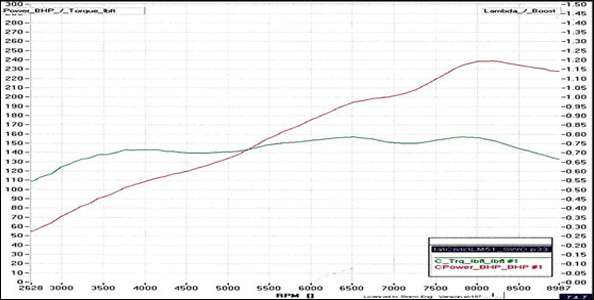 Improving petrol engine performance
There was a time when what goes on under the bonnet was well understood, not only by the professional mechanic, but by enthusiastic amateurs as well. With a fairly basic toolkit a weekend project could reap a large improvement in an engine’s performance.

These days due to the computerisation of the engine and stringent legislation, would be ‘petrol-heads’ are often limited to colourful air filters and exhaust megaphones. Real gains in engine performance can only be achieved by involved engineering and ECM reprogramming, but remember, if the vehicle is to remain road legal then it must pass its emissions test at MOT. This limits the modification to improvements in volumetric efficiency.

Engine designers take into consideration every aspect of the way the air moves into the engine but at the end of the day the resulting design will be a compromise of power, driveability and reliability. This gives the engine modifier room to manoeuvre.

Ultimately the ECM is ‘king’. Unmodified, naturally aspirated engines will benefit little from a remap but the power output of pressurecharged engines can be improved by up to 30%.

So what is remapping?
The engine ECM is a computer, and as such, works in a different time frame to us. Millions of decisions can be made every second, so a decision about how much fuel to inject or when to ignite it – even at 10,000rpm – is done with plenty of time to spare. The ECM uses a set of instructions and data look-up tables to do its job. Basic look-up tables are fuel and ignition but there are many more for coolant temp, map, boost, etc (see table below).

The look-up table maps can be displayed graphically which produces a contoured map of the data, hence the term ‘mapping’ (see graph below).

Remapping is done by altering the data. The fuel and ignition is altered to take advantage of changes in boost pressure control. Initially this will have to be done using a chassis dynamometer but once a working map is made it should fit every standard engine of the same specification.

For off-road performance vehicles, bespoke mapping is needed. A dynamometer and either a wide band oxygen sensor or a gas analyser is essential to take advantage of the modifications to the engine and get optimum performance and reliability.

Without the catalytic converter, and with no worries about emission tests, the air/fuel ratio can be altered. This will give further improvements in torque and power (obviously with great detriment to fuel economy and the environment).

The catalytic converter can only work its magic if the air/fuel ratio is as close as possible to 14.7:1 or λ1. This gives lower emissions and fuel consumption, however for optimum power a rich mixture of around 12.5:1 or λ0.85 is used. This mixture also runs cooler and is therefore a safer air fuel ratio (AFR) for performance engines. As can be seen in the screenshot below, the AFR is adjusted to 12.5:1 from around 4,400rpm. 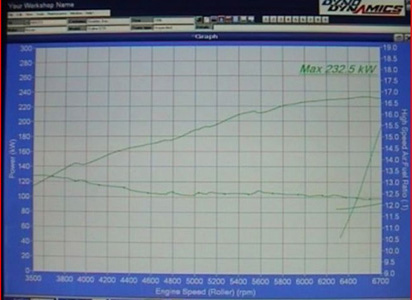 The plug-in box fits between the harness and the ECM. Signals from the sensors are modified before they get to the ECU and this effectively fools the engine’s ECM into injecting more fuel.

Remapping companies claim that this can be done because diesel engines run with air fuel ratios that are weak. In a diesel engine there is always more oxygen in the cylinder than is needed by the fuel. This ensures the most complete combustion possible and reduces the emission of particulates. By increasing the amount of fuel injected, some of this excess air is used to provide more torque. The results can be quite startling. The Dynamometer reading below shows a 33% increase in engine power after remapping. 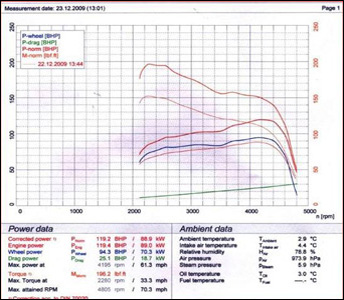 Remapping has to be done carefully to avoid excessive emissions. This is especially true of vehicles fitted with DPFs. The DPF removes carbon particulates (black smoke) before storing it and eventually it becomes blocked. Sensors identify this and initiate a regeneration process which heats the filter to over 600°C. The carbon is burnt off as CO2. The DPF can be problematic especially if the regeneration is interrupted by short drive cycles.

Increasing fuelling is likely to produce even more particulates which will increase the frequency of regeneration exacerbating any DPF problems.