Autoelectro look at troubleshooting tips for starter motors and alternators.

Autoelectro’s technical experts are working to boost technicians’ confidence in removing and fitting starter motors and alternators. In this Tech Tip, the experts help Barnsley technician, Robert Oldknow, to discover a unique fault exhibited on a 2013 Jaguar XJ 3.0D.

Robert, an installer based at A&A Motors, in Wombwell, identified a fault which displayed symptoms associated with a tandem solenoid (TS) starter motor. The system is designed to reduce start-up time and, implemented by a mechanism that separately controls the forward shift of the pinion gear and the motor rotation, create a quicker restart.

“This fault is happening because the motor is energised, but due to insufficient voltage to the second connection, this does not allow the solenoid to index the pinion.”

This now allows the engine – in this case, of the Jaguar – to restart via the starter motor, even while the engine is still coming to a stop. Conventional stop-start starter systems, however, require the vehicle to be stationary and the engine to be switched off before the starter motor can restart the engine.

Undoubtedly, the technology is impressive. However, it has made diagnosing starting faults more difficult – as Robert and Autoelectro have discovered.

The two-pin connection to the solenoid receives two live feeds. If one of the two connections is not accepting the correct voltage to the terminals, a fault similar to a failed solenoid can result: pinion gear spinning but not engaging.

This fault is happening because the motor is energised, but due to insufficient voltage to the second connection, this does not allow the solenoid to index the pinion. It is this fault that Robert identified on the stricken Jaguar. The technician went to work to discover whether it was a starter motor or a vehicle issue, as well as exploring how to fix the error. 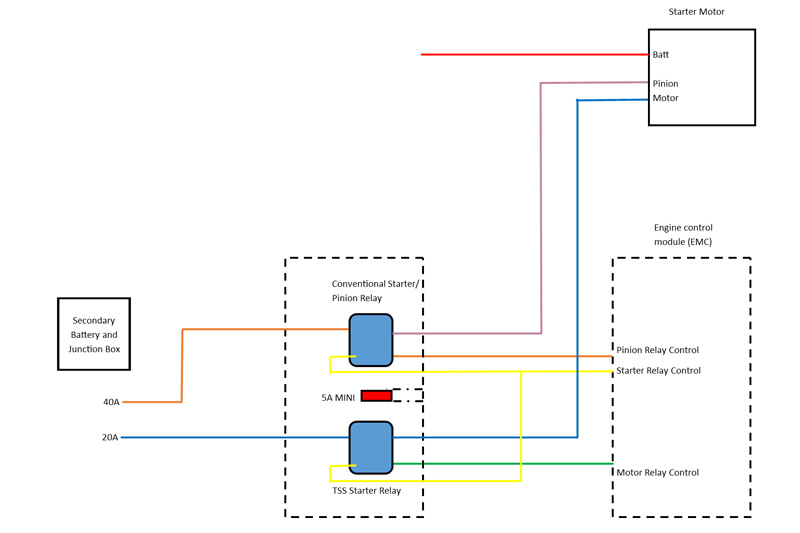 He carried out diagnostic work and obtained a wiring diagram for the vehicle’s electrical systems. Tests were carried out, and the results showed that only one of the two pins to the solenoid was receiving a live feed, indicating some form of wiring fault.

The evidence meant the wiring diagram became critical, as the circuit is difficult to read and follow.

From the vehicle’s Engine Control Module, there are three connections, which split into two relays and are located within the engine junction box. The two relays then connect to the starter motor, providing the voltage to control the operation.

Continuing, the relays are connected to two fuses, which are located within the secondary battery – positioned in the boot. In order to access the fuses, Robert had to remove the battery and junction box cover.

“This scenario proves that, often, it is easier to blame the product than investigate and discover the root of the problem – in this case, the fault on a vehicle.”

When testing the fuses, he discovered that the 40A fuse – a ‘J case type low profile’ fuse – connected to the pinion relay had failed. The non-working fuse was not allowing the correct voltage to supply the solenoid in order to index the pinion and start the engine. Once the fuse was replaced and the components were reinstalled to the vehicle, the starter motor operated fine, and the fault has not reoccurred.

This scenario proves that, often, it is easier to blame the product than investigate and discover the root of the problem – in this case, the fault on a vehicle. Autoelectro claims it has encountered too many of the same issues in the past – without the technician questioning the vehicle itself or the fitting instructions.

For further information about the range of starter motors available from Autoelectro, click here.
Tags:AutoelectroIgnitionJaguar